ABT Sportsline at Geneva Motor Show 2017

ABT Sportsline at Geneva Motor Show 2017 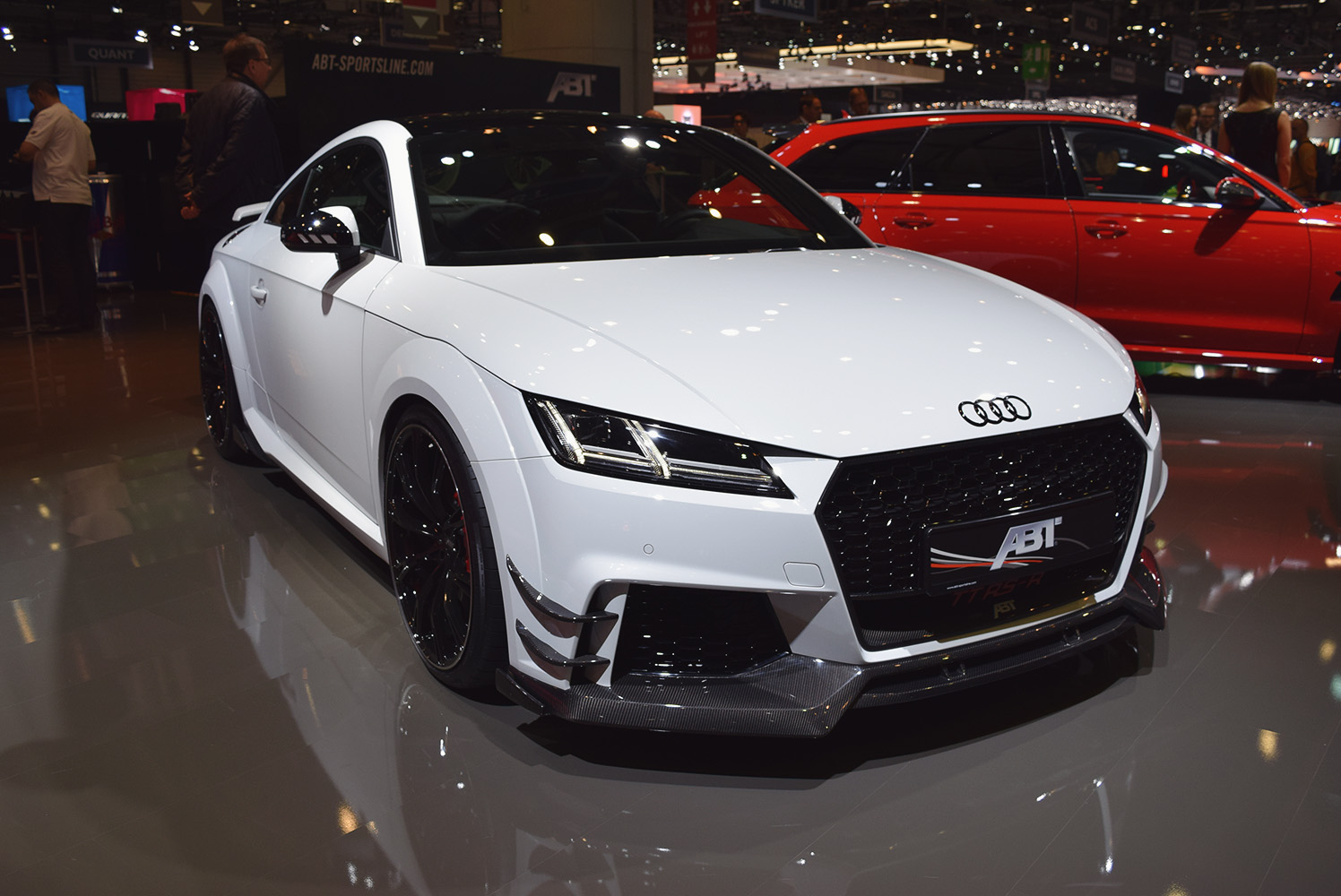 The modified cars at Geneva Motor Show were spectacular, but one range of cars stood out to us as one of the best in the show - ABT Sportsline's Audi mods.

[vc_row][vc_column][vc_custom_heading text="Some of the modified cars at Geneva Motor Show 2017 were spectacular, but one range of cars stood out to us as one of the best in the show - ABT Sportsline's Audi mods." font_container="tag:h3|text_align:left" use_theme_fonts="yes"][vc_column_text]ABT Sportsline had four models on display - the ABT SQ7, the ABT R8, the ABT RS6+ and the ABT TT RS-R. Each one had a whole host of changes to improve the performance, design and overall tuning of the cars. The Bavarian tuner was eager to let people look around their performance versions of the already powerful cars, so we took a peek around and inside them in the video below.[/vc_column_text][/vc_column][/vc_row][vc_row css=".vc_custom_1481109360829{background-color: #212121 !important;}"][vc_column][vc_column_text][/vc_column_text][/vc_column][/vc_row][vc_row][vc_column][vc_column_text]With the ABT SQ7, the tuner states that SUVs are commonly associated with being slow vehicles, but if you think that, then you haven't seen their kitted out SQ7. The optimisation that the ABT POWER control unit provides brings the car up to 520bhp (up from an already impressive 435bhp). The control unit allows the driver to lower their SQ7 with air suspension by up to 20mm. If you don't like the throaty sound of the SQ7 as it is already, ABT will install their Sound Control system so that people around the modified model will hear a high-powered sporty sound from the engine at the push of a button. The tailpipe trim is made of a material combination of stainless steel and carbon meaning that the view from behind only shows off the best materials on the car. ABT says that this is one of the best features of the car because it's the only that that every other driver on the road will be able to see.[/vc_column_text][vc_single_image image="4337" img_size="full" css_animation="top-to-bottom"][vc_column_text]The ABT SQ7 also has a range of visual accessories that ABT will install - we imagine that the majority of these options were on the car we saw at Geneva. These accessories will change everything from your front skirt, fender extensions and rear skirt to your rear wing, fender inserts and door strip attachments. The package that stood out the most, though, was the carbon exterior package. This option adds a carbon front skirt add-on, door strip attachments and a front grille frame made of carbon. The carbon tailpipe trims and wheels to match the body styling are also available from ABT Sportsline. A number of changes inside the car have also been upgraded with individual accessories such as integrated entrance lighting, floor mats and more. They have also updated the leather seats to have the ABT logo, which is an impressive flourish on an already astounding car.[/vc_column_text][vc_single_image image="4332" img_size="full" css_animation="top-to-bottom"][/vc_column][/vc_row][vc_row][vc_column][vc_column_text]

[/vc_column_text][/vc_column][/vc_row][vc_row css=".vc_custom_1481109360829{background-color: #212121 !important;}"][vc_column][vc_single_image image="4386" img_size="full" css_animation="top-to-bottom"][vc_column_text]The ABT R8 is "for customers who think that even an Audi R8 V10 plus does not look athletic enough". That being said, after tuning the R8, ABT are only able to squeeze another 20bhp out of the supercar to bring it up to 630bhp. The majority of the changes on the R8 model were cosmetic with updated front and rear skirts that bring the ABT R8 even closer to the road visually. The matching front lip and the front, side and rear blades refine the aerodynamics of the German sports car even further. Naturally, the wheels will have to match the sporty look of the body, so ABT offer forged 19-inch ABT HIGH PERFORMANCE GR alloys in "anodized black".[/vc_column_text][/vc_column][/vc_row][vc_row][vc_column][vc_single_image image="4347" img_size="full" css_animation="top-to-bottom"][vc_column_text]The ABT RS6+ is limited to just fifty models. The standard performance version of the RS6 has 605bhp and is the most powerful version, clearly topping the basic model. That being said, ABT somehow managed to up the power to 705bhp (seven-hundred and five). ABT created an exclusive complete vehicle with just 50 to choose from - the one at Geneva was the first of those models. The 22-inch 'GR' alloy wheels were brand new and come standard on the ABT RS6+. The paint of the wheels is either "glossy black" or "matt black". Of course, the alloy wheels perfectly match the dark carbon fibre look of the parts: front lip, front skirt add-ons, mirror covers, side skirt and rear skirt add-ons as well as the rear spoiler - all designed with visual carbon.[/vc_column_text][/vc_column][/vc_row][vc_row css=".vc_custom_1481109360829{background-color: #212121 !important;}"][vc_column][vc_single_image image="4291" img_size="full" css_animation="top-to-bottom"][vc_column_text]Finally, the German company focused their attention on creating pure driving enjoyment with the ABT TT RS-R. The standard 2.5 litre petrol engine in the current Audi TT RS already provides an impressive 400bhp. After optimisation, ABT Sportsline, brings the sportscar up to an impressive 500bhp. This makes the ABT TT RS-R more powerful than any standard Audi TT ever built. The body of the ABT TT RS-R received high quality add-on parts made of visual carbon which make it clear that this is a genuine ABT Audi. It includes the front spoiler, the exclusive front grille frame with a red TT RS-R logo, side skirt add-ons with side blades as well as a multi-part rear skirt add-on with a red TT RS-R logo to point out the concentrated power of the German sportscar. The stainless steel exhaust system with double tailpipe trims ensures that the sound perfectly matches the exterior.[/vc_column_text][/vc_column][/vc_row][vc_row][vc_column][vc_custom_heading text="Fantastic tuned cars with a fully customised approach - the ABT Sportsline mods turn already capable cars in to insanely powerful beasts." font_container="tag:h5|text_align:left" use_theme_fonts="yes"][/vc_column][/vc_row]