Well, there it is - the new MacBook Pro with Touch Bar, and it is a bigger improvement than we expected. Tim Cook took to the stage last night to run us through the history of the MacBook, declaring that every iteration of the laptop has made risky design choices to help shape the future of mobile computing. And, as Cook said, they did it again. Touch Bar The Touch Bar is what most creative professionals will be talking about this morning. The thin strip at the top of the keyboard, leaked earlier in the week, is actually a thin Retina touch screen that shows contextually controls based on what application you're using. If you're using a browser, you favourites and current tabs will show along the Touch Bar to give you quick access to them without having to take your hands away from the keyboard to move the mouse around the screen. If you're using Photoshop, all of your favourite tools will be on the Touch Bar allowing you to, for example, change the brush size - this allows you to edit images on Photoshop in full-screen without distracting toolbars around the edges of the app. You can even use the Touch Bar to select Emoji when you're in messaging apps. 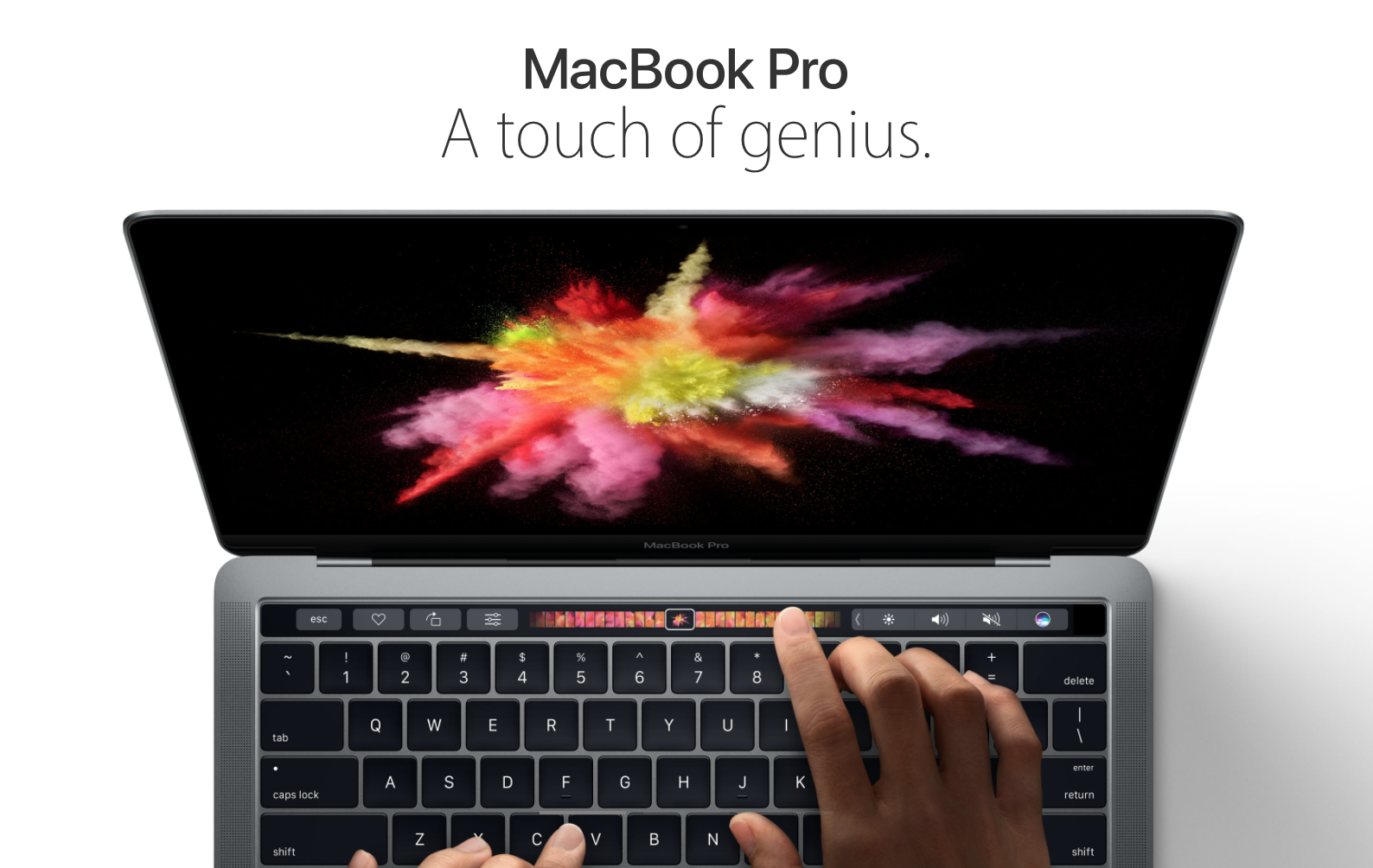 Ultimately, this innovation makes perfect sense. You can still use the function keys, which will only display on the Touch Bar when you hold down the Function key on the bottom-left of the keyboard. Expect developers to release updates for their apps before the end of the year to make them compatible with the Touch Bar. Touch ID As predicted, the far-right of the Touch Bar also has Touch ID allowing you to purchase products in your browser using Apple Pay. This is a big announcement for Apple that mostly went under the radar due to the big product announcement, but this could seriously shake up how people shop safely online. Keyboard & Trackpad The keyboard on the new MacBook Pro is, as expected, the same design as the one that was introduced in the 12-inch MacBook. There have been some improvements since then as the MacBook Pro has a second-gen butterfly keyboard with a more responsive feel. Those who have used the 12-inch MacBook keyboard will know that the biggest problem is that it takes some getting used to - it simply doesn't feel like you're pressing the keys in far enough for it to be registering on the laptop. Hopefully, this will be improved on the MacBook Pro. (Note: long-term users of the 12-inch MacBook generally say that once you're used to the keyboard, it's a much nicer experience overall). 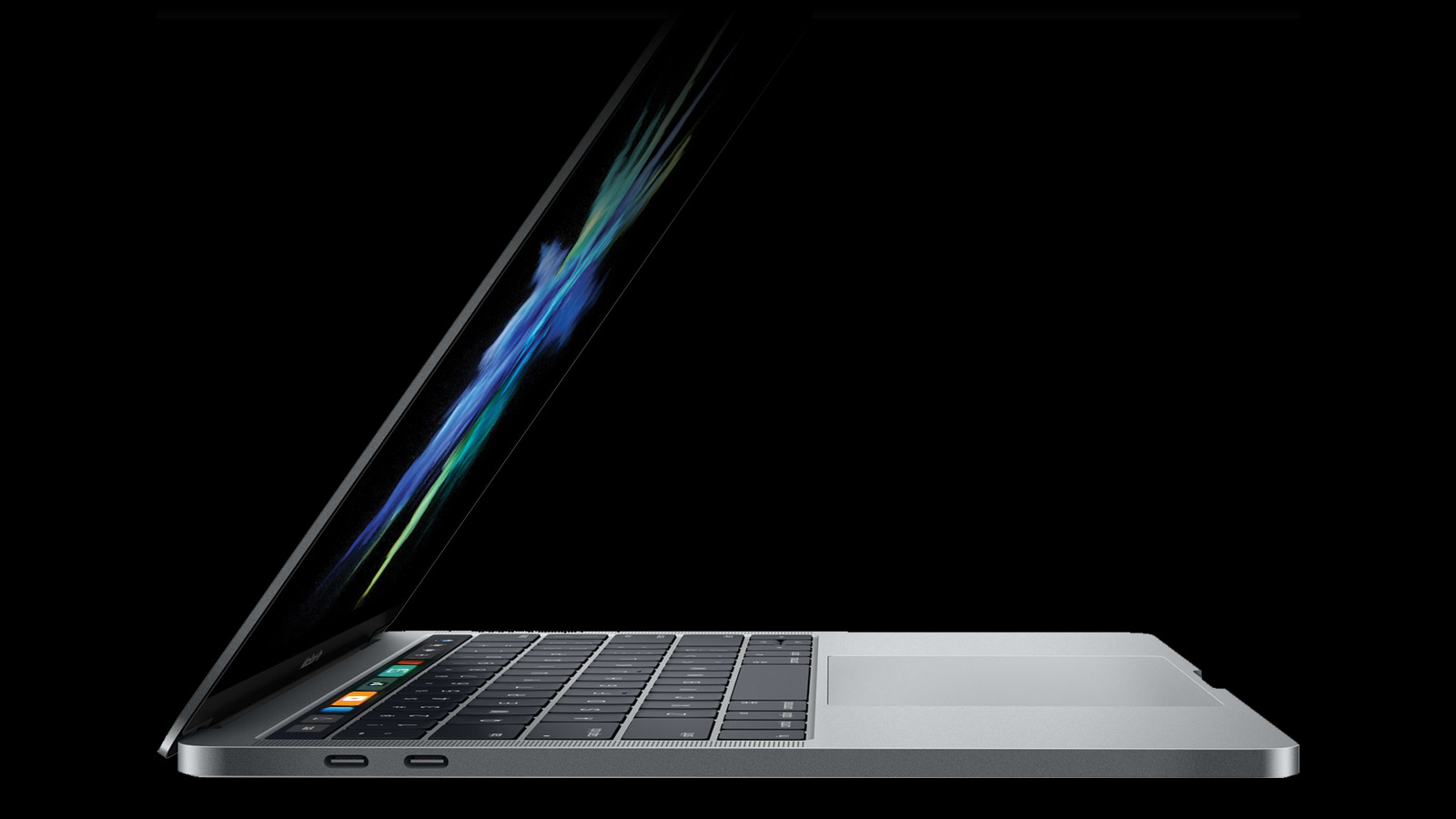 The trackpad has been doubled in size to allow for an expansive area for multi-touch gestures. This should make it nicer to use four-finger gestures and swiping gestures that are prominent in macOS. Bye bye, MacBook Air The MacBook Air got a mention at the event, but it was essentially a death knell for the slim device. Shown side-by-side, the MacBook Pro was slimmer than the MacBook Air. Presumably, if Apple were to slim the MacBook Air down any further, it would essentially become the 12-inch MacBook, so the company has decided to leave any mention of the Air out of its new line-up of laptops. To appease MacBook Air fans, Apple introduced a dumbed down version of the new MacBook Pro - that is to say that it doesn't have a Touch Bar and opts for traditional function keys - that is more affordable. Colour Options We were right when we said that the new MacBook Pro would have colour options like the 12-inch MacBook. The MacBook Pro now comes in Space Grey and a more traditional Silver. Apple are currently using the Space Grey version for almost all of their marketing. I don't know why, but the Space Grey model certainly does look more professional, perhaps because it makes the colours of the new screen stand out even more. What else? Obviously, the processing power and graphics power have been improved over the previous generation, but the new models still have a fantastic 10-hour battery life. The 13-inch models both start with 256GB SSD storage with the 15-inch model getting 512GB as standard. The new laptops ditch USB 2.0 / 3.0 ports in favour of four USB C ports. There is still a headphone port though - phew! Speakers on the new MacBook Pro are now twice as loud, even though they're smaller! The screen is now twice as bright with a better colour range, so expect the MacBook Pro to look even better than ever. Availability You can order the whole range of new MacBook Pros, but don't expect a Touch Bar model for another 2-3 weeks as Apple scales up production on the new devices. If you opt for the model with traditional function keys, you are likely to receive it as soon as Apple can ship it to you! To get our latest offers direct to your inbox, please fill in the form below.