The Audi A8 at the Frankfurt Motor Show

The Audi A8 at the Frankfurt Motor Show 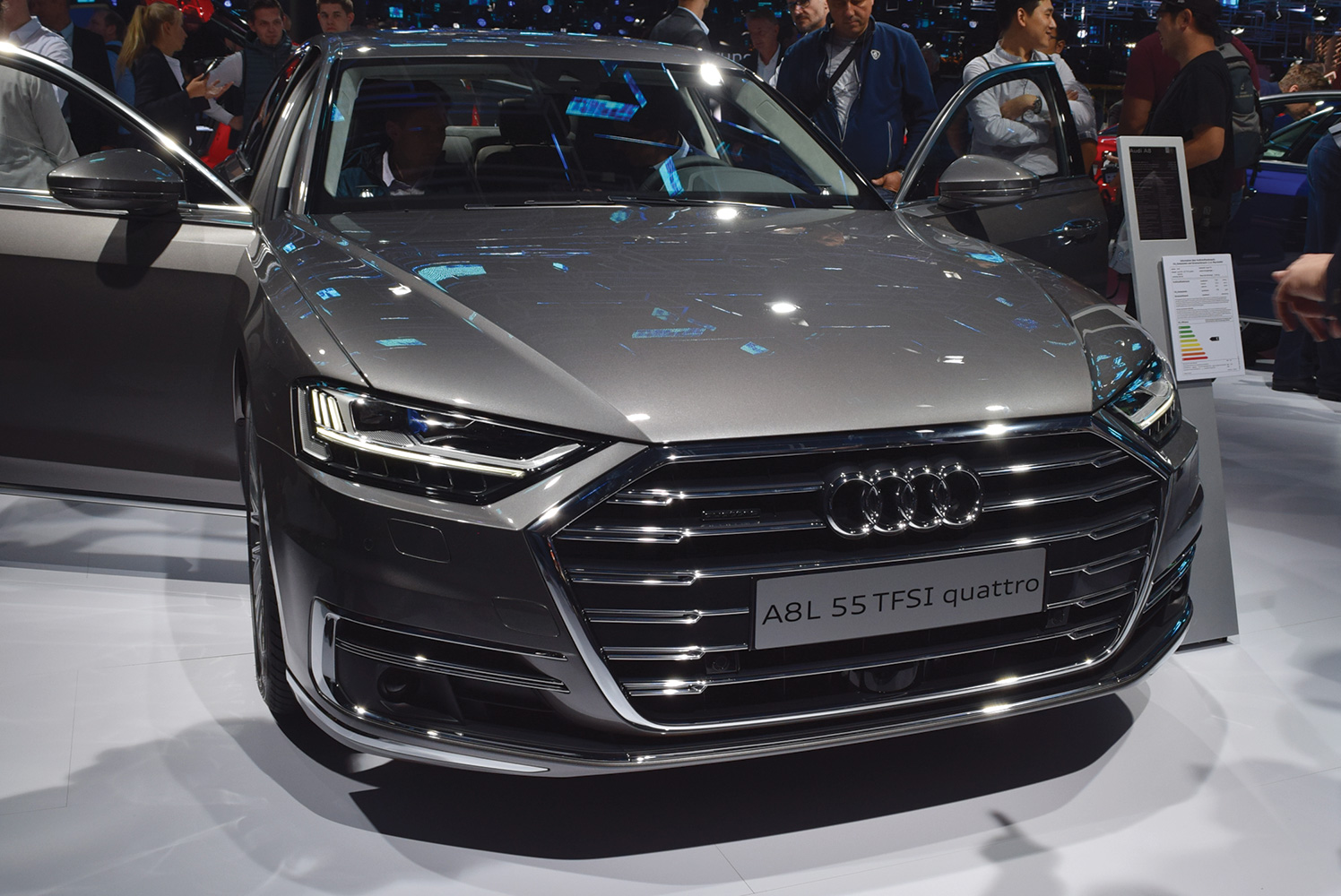 The Audi A8 is getting all the attention at Frankfurt Motor Show - and with features like autonomous driving, a completely rethought MMI system and a...

The Audi A8 is getting all the attention at Frankfurt Motor Show - and with features like autonomous driving, a completely rethought MMI system and a foot massager, we can see why.

[/vc_column_text][vc_column_text]With the Audi A8 models on display, and numerous engine options - all sporting Audi's new engine naming system - the carmaker presents the future of the luxury class. In its fourth generation, the brand's flagship model again provides the benchmark for Vorsprung durch Technik. With a new design language, an innovative touchscreen operating concept and a systematically electrified drive, Audi are pushing forward with new technologies to show that they can keep up with innovation in an ever-competitive market. The Audi A8 is also the first Audi production car to have been developed for highly automated driving. The promise is that a press of the Audi AI button in the centre console will allow the driver to partially relax and let the car do the driving.[/vc_column_text][vc_column_text] [/vc_column_text][vc_column_text]Although both the Audi A8 and the longer A8 L will be available by the end of 2017, the Audi AI functions such as Parking Pilot, Garage Pilot and Traffic Jam Pilot will be brought to the car in early 2018 – the slow rollout of the features is commonplace in the motoring world as data is collected by the car to ensure that the features are entirely safe for customers to use before deploying an over-the-air software update for the car. The Audi A8 is stylistically defining – it signals the dawn of a new design era for the entire brand. The front end with the wide, upright Singleframe grille and the fluid, muscular body symbolise sporty elegance, sophistication and progressive status. We expect to see the same design on a new Audi A7 very soon.[/vc_column_text][vc_column_text]

The Audi AI button will become more and more powerful over time.

[/vc_column_text][vc_column_text]The Audi brand is renowned worldwide for sports appeal, lightweight construction and quattro permanent all-wheel drive – and the design of the new A8 conveys these values. Muscular shapes above the wheel arches and an upright front end that flows through to a gently inclined rear give the car a feeling of luxury before you even get inside. The flagship model is identifiable both in the daytime and at night, drawing on both the striking HD Matrix LED headlights with Audi laser lighting, and the LED light strip combined with OLED technology rear lights. An idea that was present in the Audi Q8 concept has been brought to the A8 with headlights that have unique light animations as the driver approaches and leaves the car.[/vc_column_text][vc_single_image image="5232" img_size="full"][vc_column_text]Audi wants the driver and passengers of the new Audi A8 to feel the freedom that the new model offers. It’s for this reason that the company is referring to the interior of the flagship as a ‘lounge’. The classiest seat in the new Audi flagship model is in the back. This is because you can get an optional Relaxation Seat in the A8 L that comes with four different adjustment options and a footrest. In this seat, the passenger can warm and massage the soles of their feet on a unit with multiple settings incorporated into the back of the front-passenger seat. The new comfort head restraints complete the experience. The rear passengers can also control an array of functions such as ambient lighting, the new HD Matrix reading lights and seat massage, plus make private phone calls, via a separate operating unit. The Rear Seat Remote, with its OLED display as large as a smartphone, is a removable unit housed in the centre armrest.[/vc_column_text][vc_single_image image="5231" img_size="full"][vc_column_text]What people will be talking about the most, though, is a second touchscreen display on the centre console that gives you access to the air conditioning and comfort functions. When the driver activates a function in the upper or lower display, they will hear and feel a satisfying 'Audi Click' by way of confirmation. The glass-look operating buttons respond in the same way. The combination of acoustic and tactile feedback along with the use of common touch gestures such as swiping make the new ‘MMI touch response’ especially safe, intuitive and quick to use.[/vc_column_text][vc_column_text]

Order books for the new Audi A8 are expected to open soon with deliveries expected to start in December!