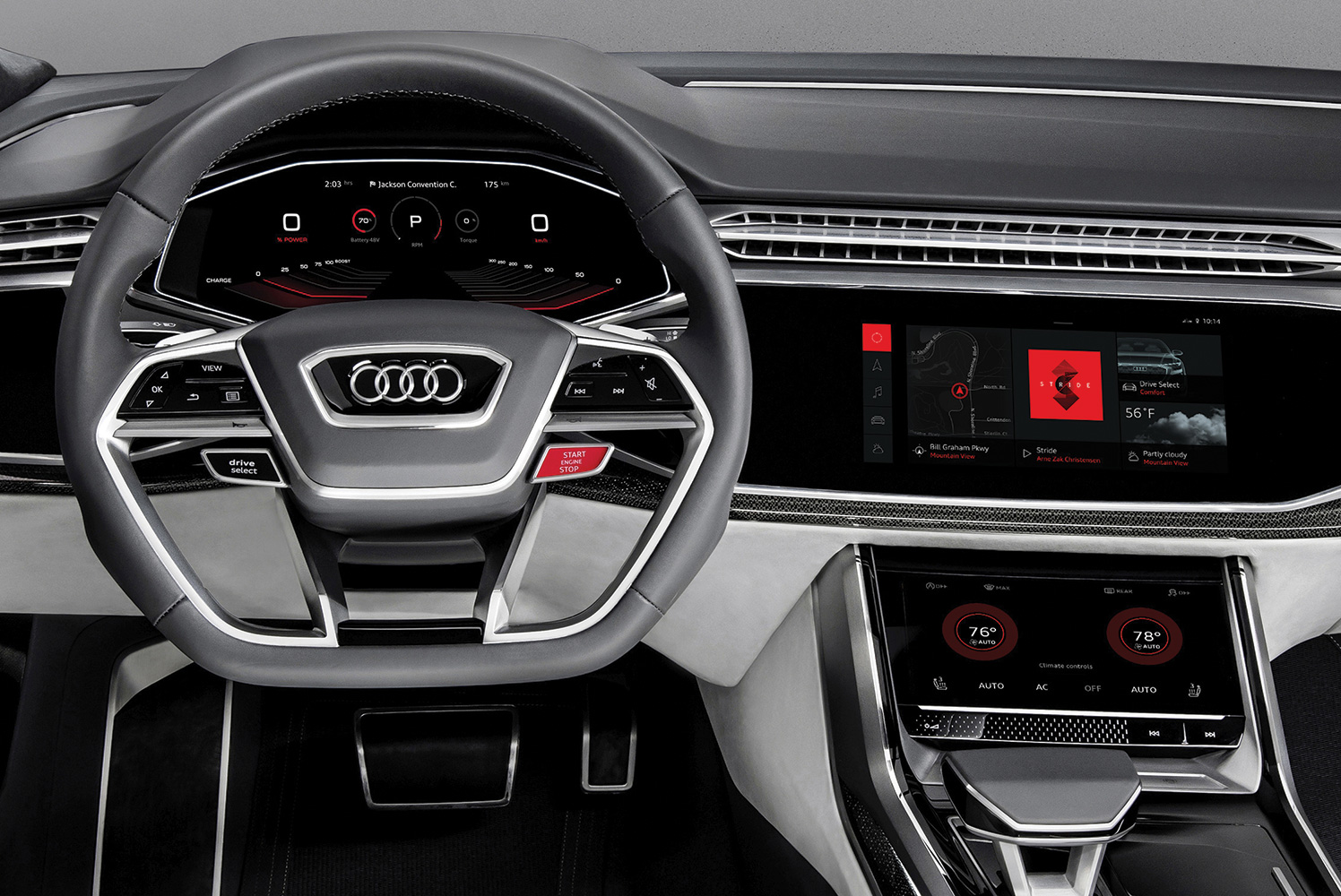 Audi has revealed that it has been working on a new infotainment system based on the Android operating system more commonly found in mobile phones.

Audi has revealed that it has been working on a new infotainment system that will be used in future vehicles, and it's based on the Android framework that is more commonly found in smartphones.

Audi has chosen to include the extremely current Google Assistant in their new infotainment system.

[/vc_column_text][/vc_column][/vc_row][vc_row][vc_column][vc_column_text]Audi defaulted the navigation system to use the HERE maps system - this is the system that many car manufacturers are opting to use in their future models as it will prove extremely valuable for piloted driving systems. You were able to change the navigation system to use Google Maps if you chose to, though. Clicking in to an app brought up a full-screen version of the app. Navigation brought up a larger map on the display with directions shown in a clear list. Audi said that the maps will be always-online and always up-to-date - presumably, this will allow Audi and HERE to update maps with traffic and roadwork information. To go back to the home screen, there's a simple button at the top of the menu. The seamless music experience means that you can play songs from a CD, Spotify or other music apps in the same, simplistic interface. Sources shown included Spotify, Soundcloud, Google Play Music and Pandora music services. Presumably, you'll also be able to select other apps that you have installed on your phone as well. Audi also showed that you can tap on a Playlist button that will bring up your favourite playlists in the app you're in - in the Spotify app, it showed a list of recent playlists that were shown in a neat line (you can even swipe to show more playlists).[/vc_column_text][/vc_column][/vc_row][vc_row css=".vc_custom_1481109360829{background-color: #212121 !important;}"][vc_column][vc_single_image image="4723" img_size="full" css_animation="top-to-bottom"][/vc_column][/vc_row][vc_row][vc_column][vc_column_text]One big game changer is the inclusion of the Google Assistant. As other carmakers (including Volkswagen) have started creating partnerships with Amazon for their in-car Alexa technology, Audi has chosen to include the extremely current Google Assistant in their new system. Hold down a button on the steering wheel - or speak "OK, Google" - and the car will start listening to your request. The example we were shown was, "Can you play Keane for me?" Google's AI quickly worked out what was required of it, and it confirmed, "Okay, I will start playing Keane for you." One of the reasons we're intrigued by Audi's choice of in-car assistant is because of Google's work to reduce misheard commands on their software. They have significantly reduced errors from spoken requests in the last few years, so it should be a doddle to get your car to understand what you want it to do.[/vc_column_text][/vc_column][/vc_row][vc_row css=".vc_custom_1481109360829{background-color: #212121 !important;}"][vc_column width="1/2"][vc_single_image image="4724" img_size="full" css_animation="left-to-right"][/vc_column][vc_column width="1/2"][vc_single_image image="4725" img_size="full" css_animation="right-to-left"][/vc_column][/vc_row][vc_row][vc_column][vc_column_text]It's worth noting that this is a step away from Android Auto - a tool that allows you to use apps from your mobile phone and control them on the infotainment system. This is a fully complete operating system that can run independently of your mobile phone. Using an in-car network, you will be able to listen to music, use your sat nav, and more. It's unclear whether you'll be able to install new apps to the operating system, or whether - when you pair your phone - the car will detect what apps you have installed and offer them as choices within the system. Audi hinted that Android would also control the windows and sunroof, but confirmed that it would definitely control the air conditioning system on a separate touchscreen. The operating system will also span across to a next-generation Audi Virtual Cockpit so that it can show the same information in a concise way for the driver without having to make them look at the large display in the dashboard.[/vc_column_text][vc_column_text]

As Audi, and the Volkswagen Group in general, make partnerships with companies like Google with their Android operating system, we get a clear picture of what they want to achieve in the near future.