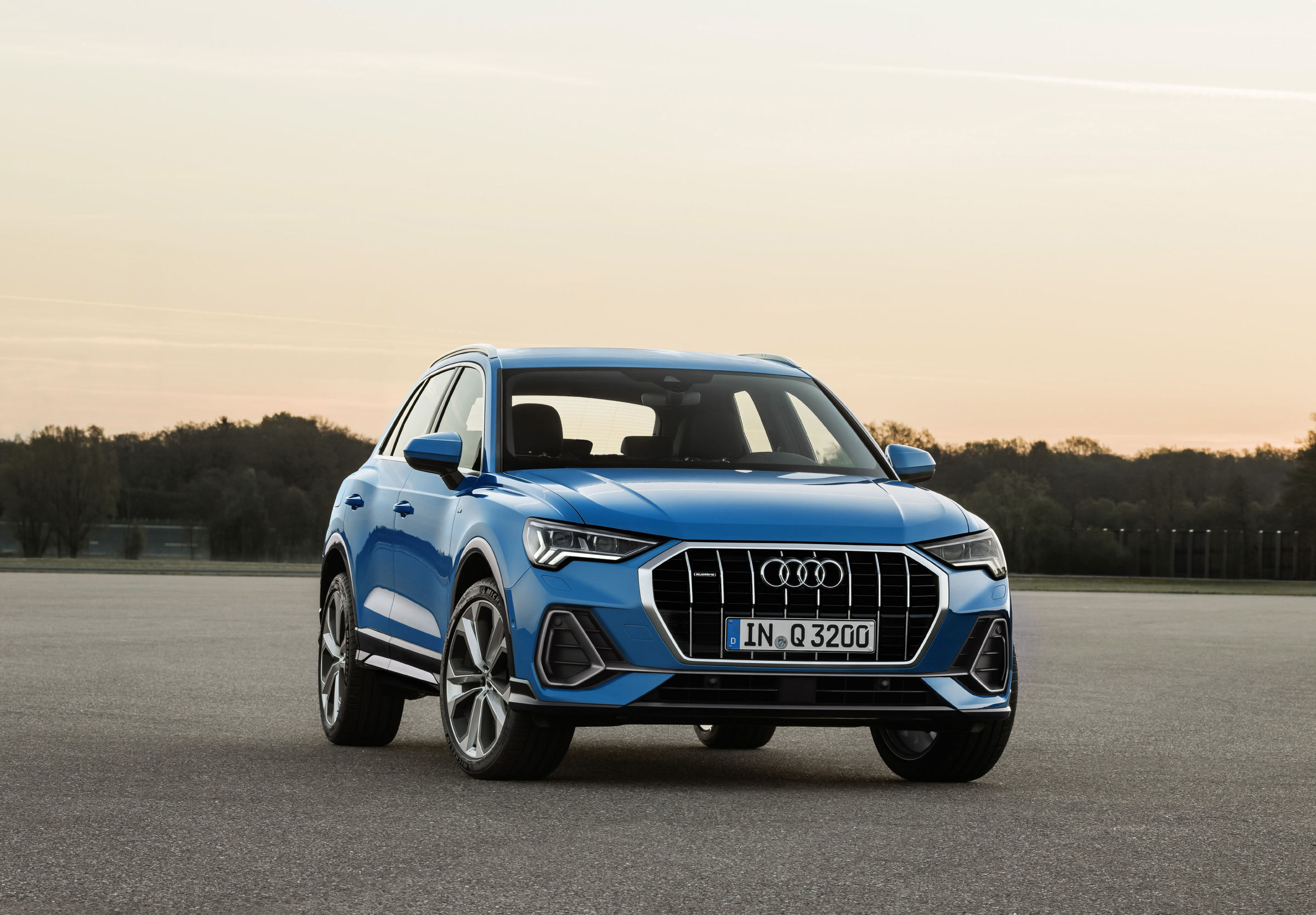 The new Audi Q3 is a family SUV with great all-round talents. In the second generation it appears not only visually more self-confident, but offers far greater utility value.

Strength and Presence: The Exterior Design

[/vc_column_text][vc_column_text]The new Audi Q3 looks much sportier than its predecessor. The Singleframe in octagon design and large side air inlets characterize the masculine front-end. Eight vertical bars divide up the radiator grille with its striking frame and reflect the SUV character. The headlights are narrow and run inwards with their wedge shape. Audi supplies them in three versions, all with LED technology. The top-of-the-line version are the Matrix LED headlights whose adaptive high beam intelligently illuminates the road. A highlight in the side view is the symmetrical lighting graphics of the headlights and rear lights. The shoulder line connects them from a styling perspective and provides an athletic overall impression with strong muscles over the wheel arches. The contours draw their inspiration from Audi’s quattro DNA and make the SUV seem even wider; the color-contrasting wheel arch trims emphasize the offroad look. Supported by a long roof edge spoiler, which also flanks the rear window at the side, the steeply raked D pillars of the body line also create an appearance of forward thrust. Customers for the new Q3 have many options for customizing their car. These include a contrasting paint finish for the attachments in the lower body section, which accentuates the SUV look even more. With the S line exterior package, the bumpers, sill trims and diffuser look decidedly sporty. Eleven paint colors are available. The interior offers a choice of three equipment lines, which can be combined freely with three exterior packages.[/vc_column_text][vc_single_image image="5864" img_size="full" add_caption="yes"][vc_column_text]

Driver-oriented and sporty: The interior

[/vc_column_text][vc_column_text]Sporty character, taut lines, three-dimensionally styled elements – the interior continues the design of the exterior and echoes in many ways the brand’s full-size models. The instrument panel is divided into two levels: the top part includes the air vents; the bottom section incorporates the large octagonal area with its black-panel look. The instrument panel varies the motif of the Singleframe and is surrounded by a wide chrome strip. The high-gloss black trim surrounds the central element of the new operating concept: the MMI touch display. Together with the air conditioning controls underneath, it is tilted 10 degrees toward the driver. The pushbutton module for the lighting functions, which replaces the rotary control on the predecessor model, is slotted into the panel to the left of the steering wheel. All displays, buttons and controls are located ergonomically. Audi has also developed a new concept for the colors and materials. Q3 customers can choose between three variants – the basic version, the Audi design selection and the S line interior package. Both packages include the sport seats, which are trimmed optionally with a combination of leather/artificial leather and Alcantara. The Alcantara surfaces on the instrument panel and on the door armrests are an entirely new option. They are available in three colors, including a bold orange. In the dark, the contour/ambient lighting package – standard with the Audi design selection – sets pinpoint lighting accents on the center console and on the doors. It can be set to 30 colors and also illuminates the storage compartment under the instrument panel as well as the quattro logo above the glove compartment, or the Audi rings on front-wheel-drive models. Other top extras include the two-zone air conditioning, the auxiliary heating, the heated steering wheel and the panoramic glass sunroof.[/vc_column_text][vc_single_image image="5865" img_size="full"][vc_column_text]

[/vc_column_text][vc_column_text]The MMI navigation plus in the Audi Q3 offers the same technical functions as in the higher segments – here too the SUV sets a new standard in the compact class. The navigation, for instance, recognizes the driver’s preferences based on previous journeys, allowing it to generate suitable route suggestions. The route is calculated – in parallel to the planning in the car – on the servers of the map and navigation provider HERE, using real-time data for the overall traffic situation. The Audi connect portfolio – included as standard with the top-of-the-line infotainment system – supplements the navigation in an ideal way. The data transfer module supports the LTE Advanced standard and provides the Audi connect services in virtually all European countries via a SIM card which is permanently installed in the vehicle. These services include traffic information online, the point-of-interest search as well as information on parking spaces and filling stations, which appear directly on the navigation map – where necessary also with dynamic additional information such as prices and availability. The Audi Q3 uses the fleet’s swarm intelligence as part of these functions: Suitably equipped vehicles report moving into and out of parking spaces so that forecasts on the availability of roadside parking space appear in selected towns and cities. The cars from this swarm also warn each other of hazardous spots such as fog or black ice, and report current speed limits. Audi connect also includes media streaming, online news, access to Twitter and to the e-mail inbox. A Wi-Fi hotspot for the passengers’ mobile devices is also fitted onboard. As an option, the customer can add on data packages conveniently from the car. The optional Audi connect Navigation & Infotainment plus add-on package also features other innovative services, including Google Earth. Using high-resolution satellite images it provides a more lifelike display, making it easier for drivers to find their way around. The same applies to the new, detailed 3D models of many major European cities. The hybrid radio is also included in the specification. Depending on a station’s signal strength it automatically switches between FM, DAB and the online stream to ensure optimum reception at all times. In conjunction with the optional Audi connect Navigation & Infotainment plus package, the natural voice control responds to inquiries not just with information stored onboard, but also with the detailed knowledge from the cloud – the same feature already premiered in the Audi A8. The online cross-referencing improves both the detection rate as well as the results. That way it is easy for the Audi Q3 to find special destinations such as an Italian restaurant, a climbing center or the next shopping mall. The system displays relevant information such as photos, opening times and visitor ratings. Many Audi connect functions are brought together in the myAudi app. It connects the customer’s smartphone to the new Q3 – allowing, for instance, navigation routes to be imported seamlessly. Once the user gets into their car, route guidance is continued on the onboard monitor. Once the driver gets out of their Q3 at the end of the journey, the smartphone navigates them onto their next destination. The app also supports music streaming and transfers the smartphone calendar onto the MMI. Furthermore, the user can remotely lock and unlock their car, consult the current vehicle status, pinpoint where their Audi Q3 is parked or operate the optional auxiliary heating using the myAudi app on their smartphone. A range of hardware modules supplement the infotainment portfolio. The Audi phone box links the owner’s smartphone to the vehicle’s antenna and charges the phone inductively. To play music from the MP3 player, USB stick or smartphone via the loudspeakers in the car, the Audi Q3 offers two USB ports – one of which is the latest new type C. This innovation supports faster transfer rates and makes it easy to connect thanks to a symmetrical plug. In addition, there are two USB sockets and a 12V socket for the rear. The Audi smartphone interface links customers’ iOS and Android cell phones and places their Apple Car Play or Android Auto environment on the MMI display. The Bang & Olufsen Premium Sound System with virtual 3D sound provides three-dimensional audio. The sound experience is generated through four additional loudspeakers in the instrument panel and one in each D pillar. A special algorithm that Audi developed in collaboration with the Fraunhofer Institute adds great width and depth to the sound – the interior of the Audi Q3 sounds larger. The sound system uses 15 loudspeakers altogether and produces a total output of 680 watts.[/vc_column_text][vc_single_image image="5867" img_size="full"][/vc_column][/vc_row]