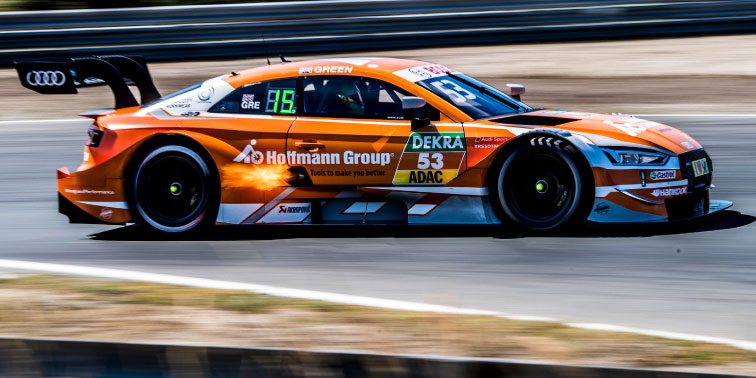 At Brands Hatch (England), the Audi DTM teams will start the second half of the season this weekend. A very challenging track profile.

At Brands Hatch (England), the Audi DTM teams will start the second half of the season this weekend (August 11/12). For the first time, the popular touring car racing series is using the tradition-steeped Grand Prix Circuit. A very challenging track profile with high cornering speeds is in store for the six Audi drivers.
The 3.908-kilometer race track on the outskirts of London has been the venue of major auto races since the 1950s. It is regarded as a true drivers’ track that separates the wheat from the chaff. The DTM most recently visited Brands Hatch in 2013. At that time, Audi driver Mike Rockenfeller won on the shorter Indy Circuit. “I’m really happy that we’re finally going to race on the longer track at Brands Hatch,” says Head of Audi Motorsport Dieter Gass. British Audi driver Jamie Green can hardly wait to be on the grid at Brands Hatch with the Audi RS 5 DTM as well. “The Grand Prix Circuit is an old-school track with many long corners, a little like Zandvoort,” says the local hero. “That’ll be pretty exciting for us drivers – a high-speed challenge. I’ve never won a DTM race at home. It would be great to do so this year.” Not only the demanding roller coaster track in the woods of the County of Kent poses a special challenge to the six Audi drivers, Loïc Duval, Robin Frijns, Jamie Green, Nico Müller, René Rast and Mike Rockenfeller. None of the teams has any previous experience with a DTM car on the Grand Prix Circuit, plus, due to noise control around the race track, the usual Friday practice will be omitted. Two 25-minute free practice sessions early Saturday morning will directly be followed by qualifying for race one. Only 20 minutes will be available before qualifying for Sunday’s race. “This makes finding an optimal setup more difficult, but the conditions are the same for everyone,” says Dieter Gass. “The track profile is similar to the ones of Zandvoort and Budapest. That’s why we’re hoping to perform like we did on those two tracks.” At Budapest, Nico Müller clinched a podium for the four rings and at Zandvoort, René Rast the first Audi victory this season.