Extensive Update for the Audi R8

Extensive Update for the Audi R8 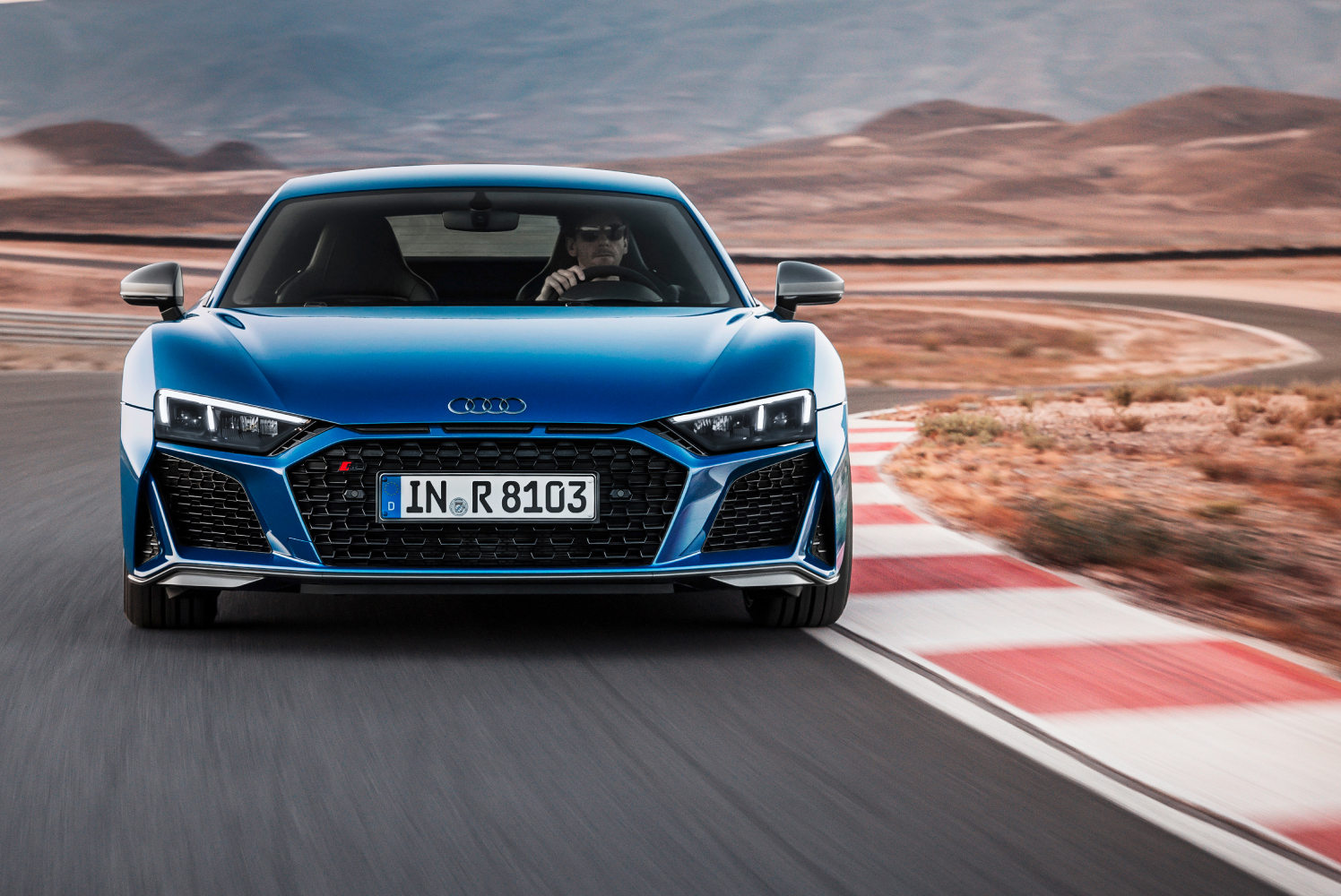 The volume-production Audi R8 model now follows after the world premiere of the R8 LMS GT3 at the 2018 Paris Motor Show. Coming Early 2019.

“Born on the track, built for the road.” The volume-production model now follows after the world premiere of the R8 LMS GT3 at the 2018 Paris Motor Show. Apart from the sportier design, the Audi R8 Coupé and Spyder have more powerful engines. The models will go on sale in Europe in early 2019.

“The R8 occupies a unique position for Audi in every respect,” says Michael-Julius Renz, Managing Director of Audi Sport GmbH. “It’s now even more powerful and faster.” adds Oliver Hoffmann, Technical Managing Director of Audi Sport GmbH: “Motorsport is part of our DNA. With around 50 percent shared parts with the R8 LMS GT3 and even 60 percent with the R8 LMS GT4, no other automobile is so close to motor racing as the R8.” [caption id="attachment_6719" align="aligncenter" width="640"]

Instant response, lightning-fast high-revving and a unique sound – the heart of the Audi R8 is its V10 naturally aspirated engine.[/caption]

The Engines: Even More Powerful

The V10 engine is available to customers in two output ratings. The almost identical drive technology of the V10 engine in the R8 LMS GT3 and R8 LMS GT4 is put to good use on the racetrack. The V10, which is produced at the engine plant in Gy?r, Hungary, is very compact. A separate radiator controls the temperature of the engine oil, which comes from a dry sump. This principle was adopted from motor racing and allows for an extremely low installation position of the engine, producing a low centre of gravity. The pump module operates with multiple suction stages and assures proper lubrication under all conditions – including during lateral acceleration of around 1.5 G, which is possible in the R8. Both engines have a gasoline particulate filter. [caption id="attachment_6718" align="aligncenter" width="640"]

The new R8 models will be arriving at dealerships in Germany and other European countries in the course of the first quarter of 2019. The models will go on sale in early 2019.[/caption]

Modifications to the suspension provide even more stability and precision. The assistance has been retuned both with the optional dynamic steering and the electromechanical power steering: Steering response and the feedback from the road come across as even more precise across the entire range of speeds. The new Audi R8 is equipped with factory-installed 19-inch wheels. Ultralight 20-inch fully milled wheels in five-V dynamic design with new summer and sport tires, which convey even more precise handling, are available as an option. Audi offers ceramic brake discs as an alternative to the standard steel discs. The stabiliser at the front is optionally made from carbon fibre reinforced polymer (CFRP) and aluminium, which cuts weight by around 2kg. [caption id="attachment_6720" align="aligncenter" width="640"]

The Singleframe radiator grille has a wider, flatter line. Thick bars divide up the large air inlets. Flat slits in the hood are reminiscent of the Audi Ur-quattro brand icon. The new front splitter is now wider, as is the striking low-set air vent grille at the rear. The grille rounds off the diffuser that extends quite some way up. All of which underlines the sporty look of the Audi R8. In the engine compartment the air filter is situated under a new, three-part cover – available in a choice of plastic or carbon fibre. R8 customers can choose from up to three exterior packages, depending on the engine variant; these packages add various highlights to the front splitter, the side trims and the diffuser. As an option, the Audi rings and badges on the exterior are painted in high-gloss black. The new metallic colours Kemora Gray and Ascari Blue add to the paint range. The Audi exclusive range gives customers the opportunity to customise many details of their Audi R8 – inside and out.