The New Volkswagen Crafter at The CV Show

The New Volkswagen Crafter at The CV Show 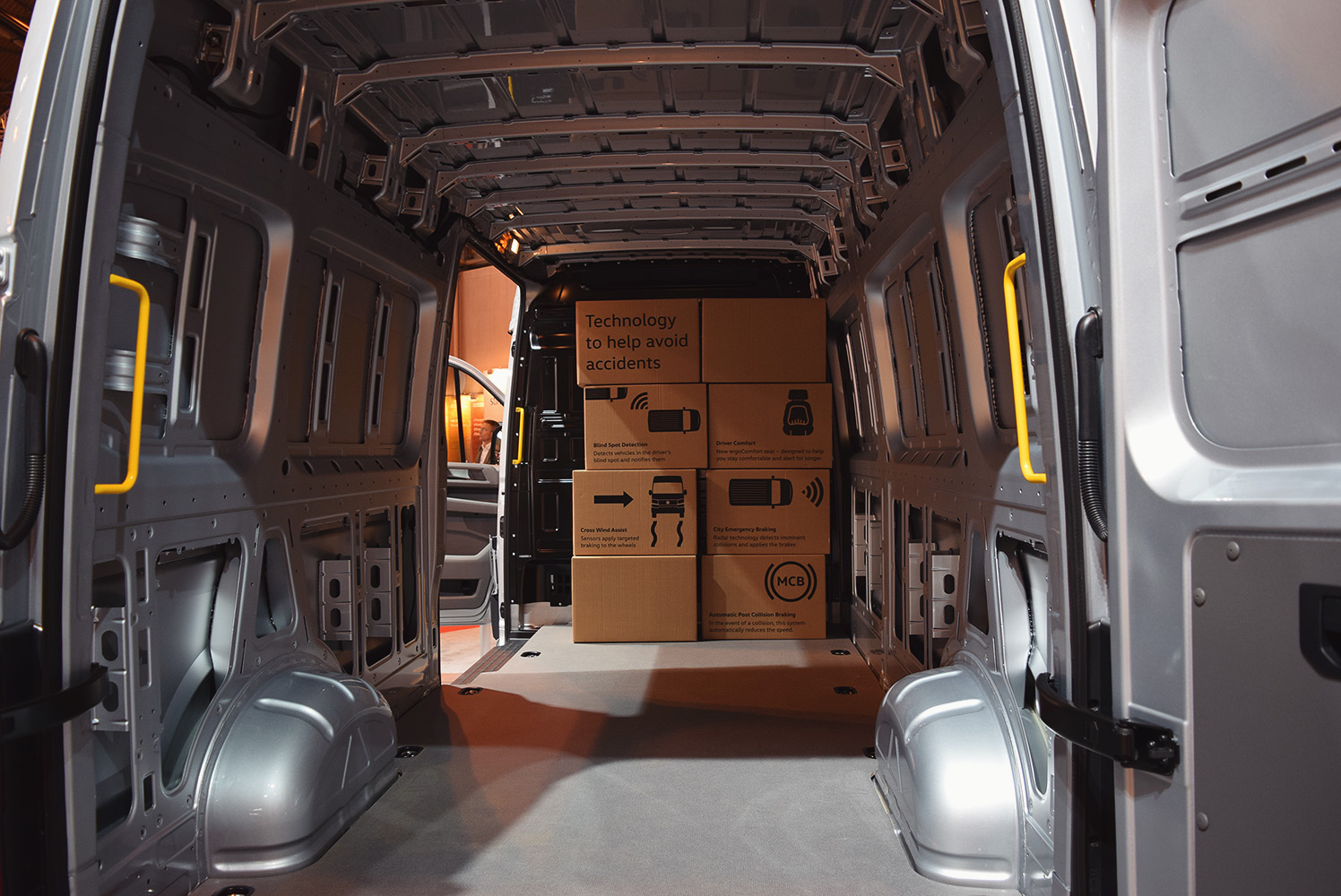 We're at The CV Show in Birmingham looking at the Volkswagen Commercial Range up close and taking a look in, and around, the new Crafter.

We're at The CV Show in Birmingham looking at the Volkswagen Commercial Vehicle range up close and taking a look in, and around, the new Crafter.

The new Crafter has loads of great new features that have been added to improve practicality, but this generation is more economical and innovate than ever before. It is also the winner of the International Van of the Year award for 2017 and it's hard to argue with this fantastic commercial vehicle. The VW team took their time talking to owners of Crafter vans and took on board all of their comments about the previous generations of the van. Using this feedback, they have developed a Crafter that is the perfect size, great to drive and has numerous safety features built in. The dimensions of the new Crafter are optional for complete practicality and ease of everyday life. For example, the models we saw at The CV Show had multiple specifications and now come with multiple trim levels for the first time. Maximum cargo capacity has been combined with minimal external dimensions to make it an extremely manoeuvrable vehicle capable of almost anything you could want it to do.

Three different vehicles lengths and heights are available so that you can customise your model to meet your needs. The Crafter sets new standards for assistance systems in the large van sector. Passive safety systems include reversing camera, parking distance monitor and rear traffic alert. In addition the comfort seating, practical open storage compartments and a standard USB charging port for charging create the perfect workspace. When developing the new Crafter, Volkswagen Commercial Vehicles worked alongside over 900 drivers, spending time with them during their working day to understand exactly what they needed. The result of this collaboration is a well-designed, reliable and practical van. So the design of the new Volkswagen Crafter reflects the professional image you want to project and, in addition to style, the Crafter’s substance will help you get where you need to go in safety and comfort, stay in touch, and carry all the tools and equipment you need to do your job.

Volkswagen Commercial Vehicles scooped top honours once again at the Trade Van Driver awards, claiming Van of the Year and Best Large Panel Van for the new Crafter. Judges were highly impressed with the model, stating "even before going on sale, the van had been hailed a winner". With it being the first of its kind to be 100% Volkswagen and built at a brand new production facility in Poland, judges recognised its "quantum leap forward over the old Crafter in terms of technology, build quality and safety", ensuring Volkswagen Commercial Vehicles’ continuing success among trade van buyers. The Volkswagen Transporter also won an award for Best Medium Panel Van, solidifying VW Commercial Vehicles' top spot in the awards. Trade Van Driver Magazine editor, Matthew Eisenegger commented: "What a fantastic year it's been for Volkswagen Commercial Vehicles. The judges' comments speak for themselves and both the Crafter and Transporter are two worthy winners. The Crafter has been revolutionised in its build quality and is head and shoulders above the rest in its sector of the market. The Transporter's handling, design and well-thought-out load areas make it a deserved winner of the Best Medium Van award."

Even prior to its launch the new Crafter had picked up a number of prestigious awards. In September 2016 it succeeded the Transporter to be being named International Van of the Year, as voted for by a panel of commercial vehicle journalists from 24 European countries. It was also named Best New Van and Van of the Year by leading commercial vehicle publication Van Fleet World in February 2017.

If you missed it, we were at the Birmingham NEC for the UK debut of the new Crafter, and it really does make an impactful change over the previous generation. That being said, all of the models on display in the NEC were huge crowd-pleasers - including the new generation Crafter - and the models here were definitely the star of the show along with the other models on display on the Volkswagen stand such as the VW Amarok V6, Caddy Black Edition, Transporter Sportline, and the small, but practical, e-Load Up! based on the VW Up model.

The new Crafter is available now from Stable Vehicle Contracts. Give us a call on 0151 728 4711 for more information!