The Grand California: Start of a new Generation

The Grand California: Start of a new Generation

The latest model from Volkswagen Commercial Vehicles, the Grand California, will make its world debut at the Caravan Salon in Düsseldorf.

The latest model from Volkswagen Commercial Vehicles, the Grand California, will make its world debut at the Caravan Salon in Düsseldorf (24 August to 2 September). The completely new motorhome is based on the ultra-modern Crafter, and with the arrival of the Grand California, Volkswagen Commercial Vehicles is extending its range by adding a model in the six-metre class, complete with bathroom. In addition to the large sleeping area in the rear, the Grand California will be available with a high bunk bed for children. The launch of the new campervan will be in early 2019. First unveiled in 1988, the Bulli-based California is the world's most successful campervan, with sales of over 160,000. Volkswagen Commercial Vehicles has used the experience gained from this iconic camper to create the new Grand California on the Crafter's technical platform. With its fresh clarity and cleverly thought-out details, the interior reflects the qualities that made the California a best-seller. The cabinet trim in the Grand California is white, creating a bright, spacious atmosphere. This is boosted by the pop-open camper windows both at the back and on the sides and the large skylights above the double bed in the rear and the living area. All camper windows are fitted with cassette blinds and flyscreens. For the driver's cab there is a new blackout concept. [caption id="attachment_5995" align="aligncenter" width="640"] 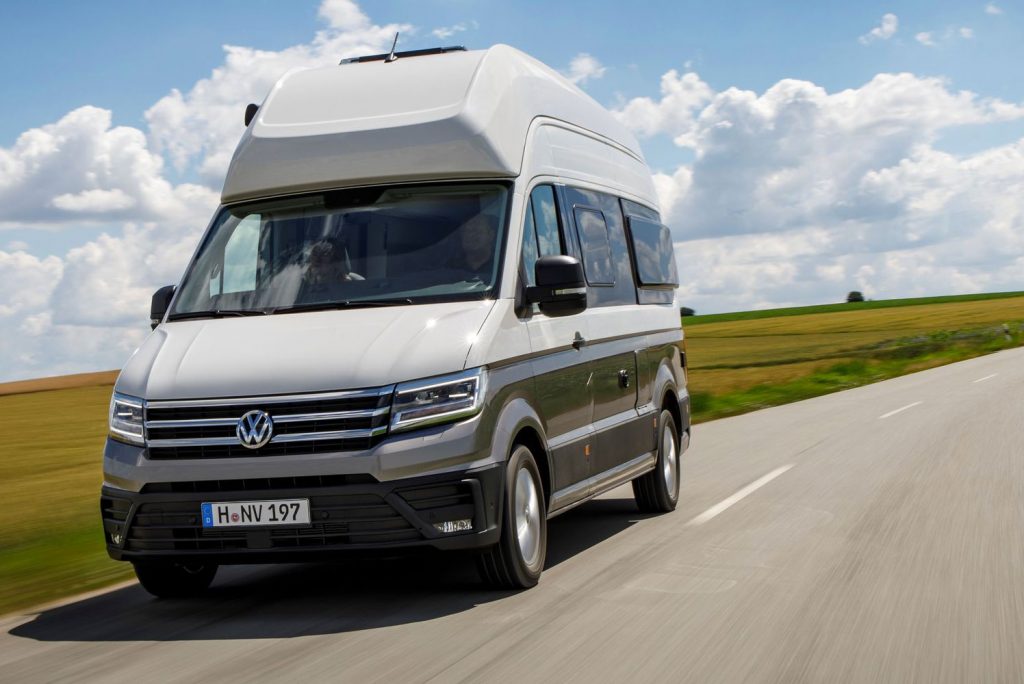 Premiere at the Caravan Salon in Düsseldorf this month[/caption] Further standard features include, in addition to the kitchen and spacious bathroom (840 x 800 mm), details such as external lighting above the sliding door. The standard connection at the back for an external shower (with adjustable water temperature) makes life on the campsite just perfect. An electrically powered step, which moves out in front of the sliding door, makes getting in and out easier, while a two-part mosquito net in the door is likewise part of the standard specification. One innovative feature is the option to control the loudspeakers in the living area via Bluetooth. This makes it possible to listen to music independently of the infotainment system using a smartphone, tablet or laptop. The Grand California is fitted with swivel seats at the front and a double bench seat in the living area. Families with small children will appreciate the ISOFIX anchor points complete with top tether in the rear bench seat. A large dining table provides ample room for four people to sit down to eat together. The kitchen fittings include a pull-out 70-litre fridge with freezer compartment (accessible from outside as well as via the sliding door), a twin-hob gas cooker, a sink and diverse drawers, pull-out storage compartments and tip-up shelves. [caption id="attachment_5996" align="aligncenter" width="640"] 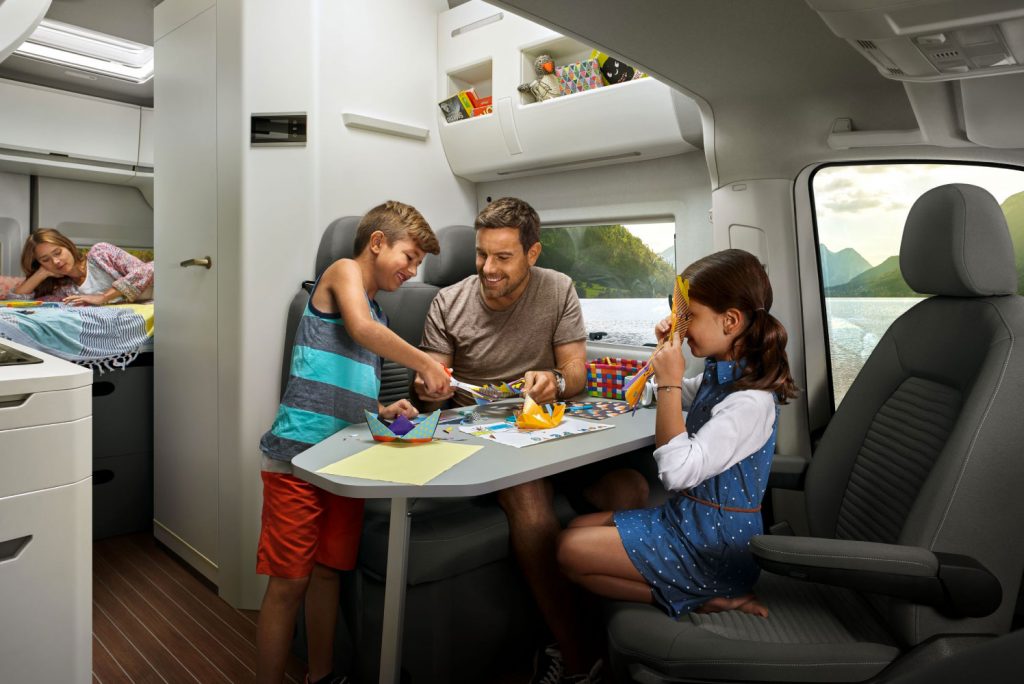 Rather spacious and well equipped![/caption] A key feature of the Grand California that differentiates it from the California 'T6' is its bathroom. In addition to toilet and shower, its fittings include a fold-out wash basin, shelves with holders for toiletries, a cupboard with integrated toilet paper holder (to protect it from getting damp), towel holders and a skylight for ventilation. The Grand California can carry 110 litres of water. There are no light switches to be found in the bathroom – the lights come on automatically via motion detectors – as standard. Optionally available is a high bunk bed for kids complete with integrated panoramic skylight. Also available are details such as an additional roof-mounted air conditioning unit at the back, an awning, a rear bicycle rack and a camping table and chairs (which can be stowed in the wing doors). The standard gas heating can be expanded as a heating system to run on gas- or diesel-generated electric power. There will also be a solar panel system mounted on the roof, a satellite dish (for TV reception) and an LTE/WiFi hotspot (router). [caption id="attachment_5997" align="aligncenter" width="640"] 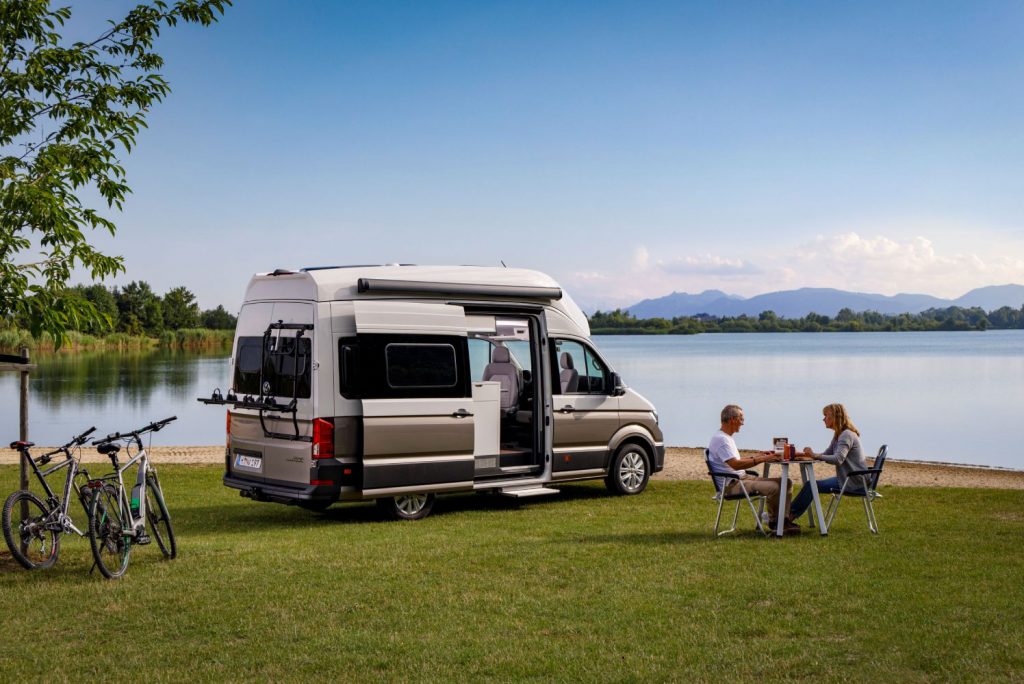 A setting that would go with a Sunday like butter with bread![/caption] In addition, the Grand California will be available with the Crafter's driver assistance and infotainment systems. The driver assistance systems include the Front Assist surroundings monitoring system with City Emergency Braking function, Lane Assist to help the driver stay in lane, Blind Spot Monitor for changing lane, Rear Traffic Alert for reversing out of parking spaces and Park Assist for steering into them, the sensor-controlled side protection system, Adaptive Cruise Control and the Rear View reversing camera. Campervans like the Grand California travel all over the world. Volkswagen Commercial Vehicles will therefore also be offering the new model with 4MOTION all-wheel drive. The newly developed camper high roof has been aerodynamically shaped in order to avoid any negative effects on fuel consumption. The two-colour paintwork concept is adapted from the California 'T6'. The single colour paintwork options are Candy White, Reflex Silver or Indium Grey. Available as two-colour paintwork are combinations of Reflex Silver and Indium Gray, Candy White and Cherry Red, Candy White and Deep Ocean Blue or Candy White and Mojave Beige Metallic. During the Caravan Salon Volkswagen Commercial Vehicles will announce further details about the Grand California, the launch dates and initial prices.