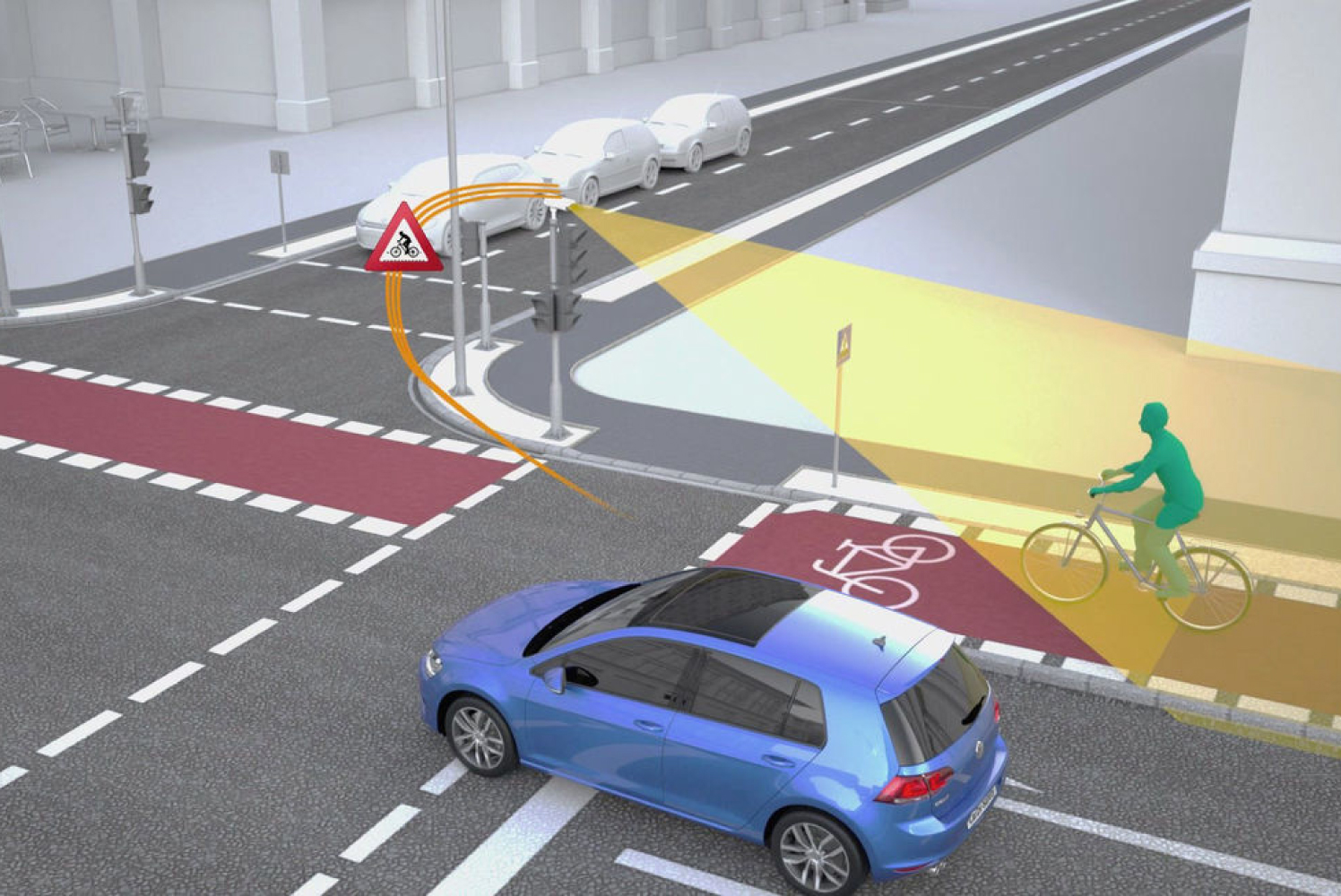 Volkswagen and Siemens want to further improve road safety especially at crossroads, with the exchange of information between vehicles and digital transport

Volkswagen and Siemens want to further improve road safety especially at crossroads. To achieve this, new functionalities have been developed for the local exchange of information between vehicles and digital transport infrastructure.

In a joint project, the city of Wolfsburg, Volkswagen and Siemens are currently setting up a test section on a main road in Wolfsburg in which ten traffic signal systems will transmit the traffic light phases in the vicinity via WLANp (ITS-G5). Future Car2X vehicles will be able to process that information and inform the driver for example, when all traffic lights in succession are on green. That way, they can avoid braking or accelerating unnecessarily. In the near future, assistant functions will be able to do this without driver intervention. The forward-looking traffic light functions in the vehicle improve the flow of traffic in built-up areas. It is hoped that this project will also contribute to road safety in general. To do this, two crossroads in Wolfsburg are being equipped with modern sensor technology to detect pedestrians and cyclists. Manfred Fuhg, Head of Siemens Mobility Germany, says, “Crossroads equipped with radar sensor technology are able to significantly increase accuracy in the detection of pedestrians and cyclists. Information that vehicles are not able to detect themselves is provided at complex intersections and accident black spots in particular.”

To distribute the sensor object data from the traffic infrastructure to the vehicle, the Car2X technology WLANp, to be introduced by Volkswagen next year, will be supplemented with additional messages. The addition enables cooperative security functions to be implemented. They intervene in situations in which the driver or vehicle cannot recognise the surrounding road users with their own senses/sensors or can only do so at a very late stage. In particular, road users such as pedestrians and cyclists, who are often involved in accidents, should be better protected by this. “Based on systems with artificial intelligence in traffic signal systems, intelligent control methods can provide vehicles with much more precise information on red and green phases than was previously possible,” says Manfred Fuhg. From today’s perspective, the use of transport infrastructure, particularly in towns and cities, offers crucial advantages over other Car2X approaches, explains Gunnar Koether, Head of Vehicle Safety at Volkswagen: “Unlike the relatively inaccurate position data of a smartphone, the use of sensors analogous to the vehicle offers highly accurate data for a critical area. An essential condition for avoiding false warnings. In addition to the technical hurdles, privacy is another aspect which could put people off using their personal smartphones.”

Working together to reach the goal

A number of partners are currently working to expand the existing WLANp standards. With the pilot project in a real traffic environment, this should be completed even faster. One thing is certain: Cooperative functions can only be effective if the transport infrastructure and all road users are speaking the same language. That is why Volkswagen and Siemens are supporting the European Union’s objective of establishing a binding framework for networked driving across Europe in the near future. Klaus Mohrs, Mayor of the City of Wolfsburg, welcomes the initiative by Volkswagen and Siemens: “The city of Wolfsburg and Volkswagen have set themselves the objective of becoming a digital model city with #WolfsburgDigital. When traffic lights and cars communicate, the benefits of digitisation become tangible for many people.”