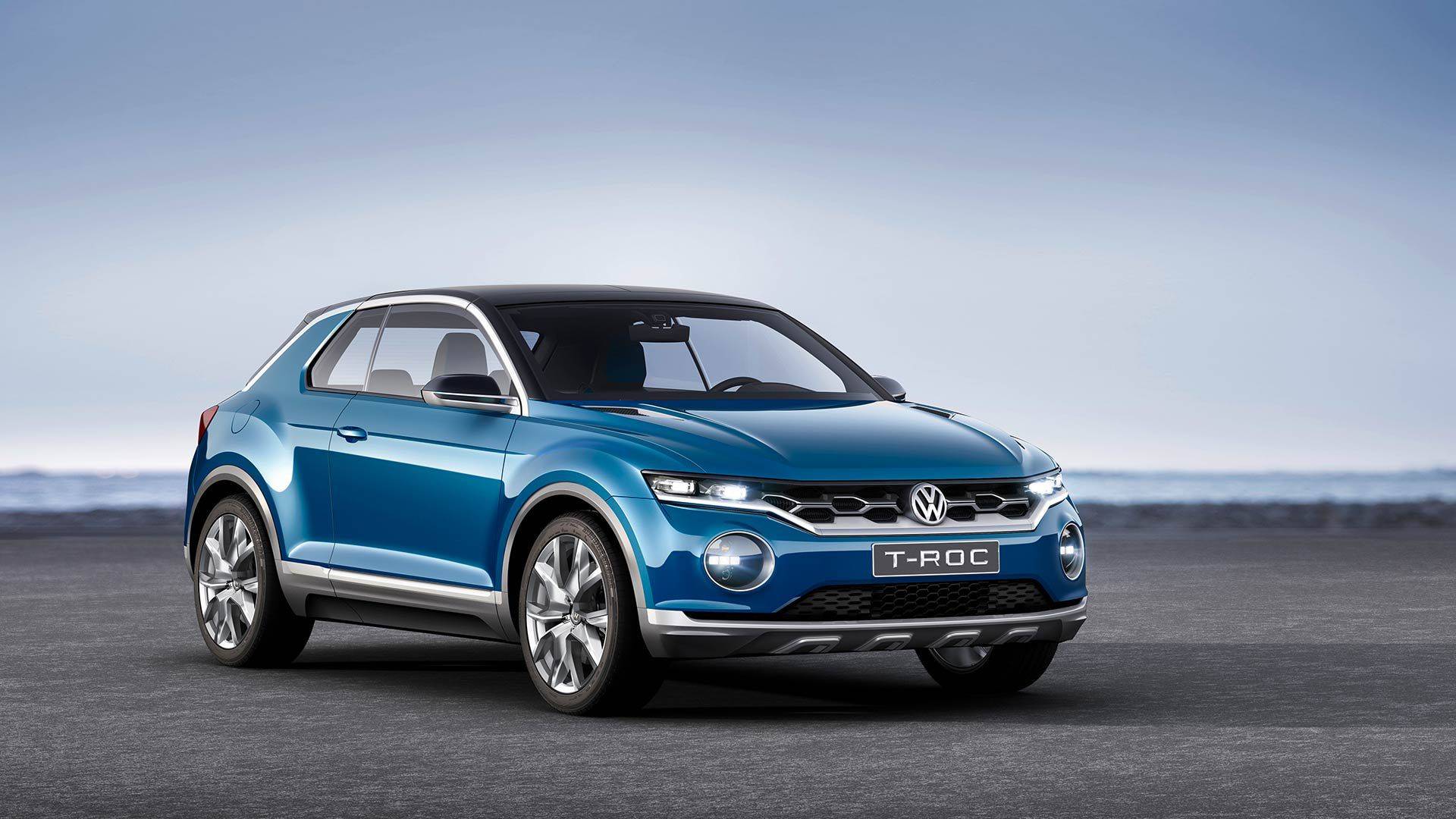 Official renders of the T-ROC have been shown off in the past, but now it seems likely that the model will be revealed this year. Read more...

[vc_row][vc_column][vc_custom_heading text="Volkswagen are supposedly planning a crossover SUV model that will sit between the Golf and Tiguan models - the name of the car has been floating around for some time now as a concept car." font_container="tag:h3|text_align:left" use_theme_fonts="yes"][vc_column_text]Official renders of the T-ROC have been shown off by Volkswagen in the past as a rough concept for the car, but when a picture of the car showed up in a VW presentation at Geneva Motor Show this year, it caused rumblings that suggest the model will be revealed this year for a 2017 or 2018 release. The model is expected to be based on the Golf engines, but will be aimed at people who value added practicality and space in their cars as well as added ride height. Rumours state that Volkswagen were expected to launch the T-ROC at Geneva Motor Show, but they changed their plans at the last second to focus on the Volksagen Arteon announcement.[/vc_column_text][/vc_column][/vc_row][vc_row css=".vc_custom_1481109360829{background-color: #212121 !important;}"][vc_column][vc_single_image image="4483" img_size="full" css_animation="top-to-bottom"][/vc_column][/vc_row][vc_row][vc_column][vc_column_text]This model should be seen as Volkswagen's version of the Audi Q2 seeing as the car will use the same MQB platform that is found in the Q2. The T-ROC is expected to have the same engine line-up as the Volkswagen Golf range, which starts with a 1.0-litre option. It's likely that the pricing of the T-ROC would put it in a similar range as the SEAT Ateca, another car that uses the same MQB platform. It's unclear whether Volkswagen will be making a song and dance about this new model as it is designed to try and capture more of the SUV market, and a new-shape Touareg model is expected to be announced by the end of the year as well.[/vc_column_text][/vc_column][/vc_row][vc_row css=".vc_custom_1481109360829{background-color: #212121 !important;}"][vc_column width="1/2"][vc_single_image image="4489" img_size="full" css_animation="left-to-right"][/vc_column][vc_column width="1/2"][vc_single_image image="4485" img_size="full" css_animation="right-to-left"][/vc_column][/vc_row][vc_row][vc_column][vc_custom_heading text="It's unclear whether Volkswagen is trying to fill gaps in their lineup where they see a loss of custom, or whether they are going to push the T-ROC as a new, affordable SUV alternative. We'll know more later this year." font_container="tag:h5|text_align:left" use_theme_fonts="yes"][/vc_column][/vc_row]