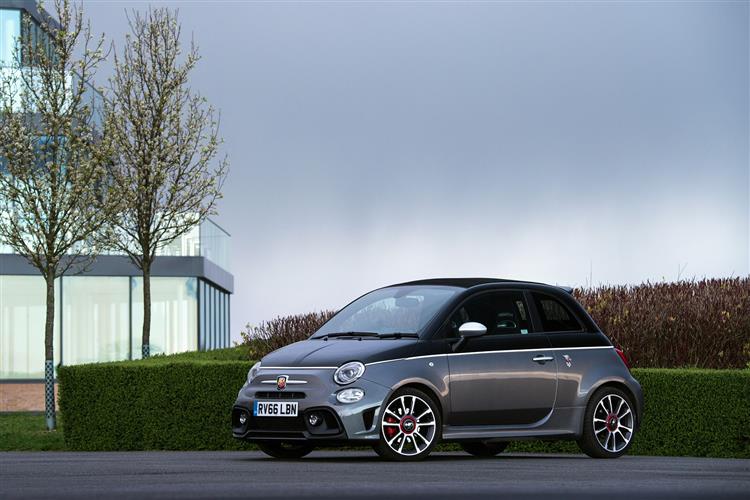 The Abarth 500 may be based on a Fiat citycar but it packs quite a punch. Jonathan Crouch takes a look.

Karl Abarth was already a five-time European motorcycle racing champion, something of an expert in the field of car modification and married to the secretary of Ferdinand Porsche's son-in-law when he established Abarth & C in 1949. This car tuning business began its association with Fiat in the early 1950s, specialising in making racing and performance modifications to the Turin manufacturer's products. Then, in 1971 Fiat brought the firm in house and began using Abarth's expertise and scorpion badge on its quickest cars. Today, Fiat is busy forcing the Abarth brand back into the limelight riding on the bodywork of fast Fiats like the 500 Abarth. The Fiat bit of this car has certainly been made scarce. There's not a single Fiat insignia visible on the exterior or in the cabin and instead, the Abarth 500 is littered with the red and yellow crest and lone scorpion of Abarth. This is clearly a Fiat 500 but the Italian manufacturer is telling us it's a very special one, worthy of its own sub-brand. The question is, can it live up to this billing?

The conventional Fiat 500 is not a car that instantly strikes you as being ripe for conversion into a rip-roaring hot hatchback. It's a little bit soft and bouncy in its suspension and although this helps it ride well over surface imperfections and makes it an amiable companion for scooting about town, it doesn't exactly encourage you to hurl it into corners. As befits its target market, the Abarth 500 is a very different prospect with far-reaching modifications designed to transform the driving experience. First is the 1.4-litre turbocharged powerplant that produces 145bhp in manual form (and the same with a semi-automatic paddle shift 'MTA' transmission) and a smooth flow of power from 2,000rpm. It's capable of firing the 500 to 62mph in under eight seconds and on to a 131mph top speed, which is plenty quick. If that's not fast enough, then a 'Trofeo' series of models are offered with a 160bhp version of this engine that'll get you to sixty almost a second quicker. Or there's a 165bhp '595' series model that's even more focused. The suspension has also been firmed up significantly to increase composure through the bends and the brakes have been upgraded to sportier items for more secure stopping. The Abarth 500 might be small but it's equipped with some interesting technological trickery. Fiat's TTC torque transfer system can detect wheelspin and by braking the wheel that has lost traction, divert the engine's torque to the other wheel where it can be effectively deployed. It adds up to scrabble-free acceleration out of junctions and away from tight corners, increasing the 500's poise and making it easier to utilise the car's power. Fiat's famous 'city button' as featured in the standard 500 models is changed to a sport button in this Abarth. Instead of making the steering lighter, it weights the helm up for more feel and a sportier driving experience but that's not all. A press of the clear plastic domed button on the dash also frees an extra slug of torque from the engine. With the Sport mode engaged, the Abarth 500 has 210Nm of torque at 3,000rpm instead of 187Nm at 2,500rpm which equates to more muscle to make the most of the car's handling.

The Fiat 500 is a car that trades on its looks at least as much as any other single part of its make up. In creating the Abarth version, however, the designers were faced with the problem of making one of the market's cutest cars look aggressive and purposeful. The effect is something of a mix and match between the 500's trademark features and the kinds of racy extras you find on today's leading fast hatchbacks. Abarth badging is everywhere from pride of place on the grille to the rear wings, the 16" alloys wheels, the steering wheel hub and the tailgate. Even the engine gets an Abarth scorpion crawling across it. At the front, below the 500's double headlights, a pair of fog lights is set into the air-intake and these jewel-like additions are mirrored by the chromed exhausts that protrude from the rear diffuser. Side skirts and flared wheelarches dominate the flanks along with the distinctive Abarth racing stripe decals. Inside, much of the standard 500's interior design is retained but there wasn't a lot wrong with it anyway. The swathe of body-coloured plastic runs across the dash with the gear lever integrated below and the air-con controls arranged in neat circles. The sports steering wheel is trimmed in leather and is extremely tactile while the sports seats also get leather coverings and large side bolsters to hold you in place. The turbo boost gauge is another addition for the Abarth and at its centre is a warning light that prompts the driver to change gear at the opportune moment. It shows the best time to shift up or down for the greatest fuel economy in normal mode but press the Sport button and it turns its attention to maximising performance.

Prices start at around £15,500 for the Abarth 500 in fixed-top form, with a premium of around £1,300 if you want the TA paddleshift auto transmission. If you want the open-topped 500C version, there's a premium of around £2,000 over the fixed-top. For that kind of money, despite its obvious charm, the Abarth 500 will have a tough task on if it's to make it big in the UK's hot hatchback sector. It goes up against some tasty rivals such as the MINI Cooper S, Renault's Twingo GT, both of which have something to be said for them. Even sportier versions of Alfa Romeo's MiTo are available for similar cash to that which Fiat wants for its fastest 500. Still, even in this esteemed company, the Abarth is a unique proposition and the great potential for customers to personalise their car with various items from the options list will be a further draw. Before you spend too much there, you might want to consider whether instead, you want to trade up to the pokier 595 series model, but that'll need a premium of around £3,000.

Being the compact size that it is helps the Abarth 500 achieve respectable fuel economy and emissions. The combined cycle economy figure of 47.1mpg and emissions of 139g/km make the Abarth one of the most affordable fast hatchbacks to run and make it accessible to groups of buyers who may have previously considered such cars out of their price range. For the 160bhp Trofeo model, the readings are unchanged and the cabriolet bodystyle doesn't make any difference to running costs either. The MTA auto does change the efficiency readings a little though - for the better; here, the figures are 48.7mpg and 134g/km.

The Abarth 500 is the car given the difficult task of replacing the standard 500's cheery grin with the menacing snarl of a hot hatchback. Remarkably, the little car looks to have pulled it off in some style. Its look is thoroughly menacing, from the badges to the bodywork but the biggest changes over a standard Fiat 500 come beneath the skin where the suspension is firmer, the steering heftier and the brakes far more capable. Even the labour-saving 'City' button becomes a licence threatening 'Sport' one that unleashes even more torque from the 145bhp motor. There may not be a Fiat badge anywhere on the Abarth 500 but it's unmistakably a 500 and the standard car's retro charm will be a key reason why buyers take the plunge. There are larger, faster and more dynamically capable models around for similar money, but very few are as fashionable right now as the Abarth - and that counts for a lot.