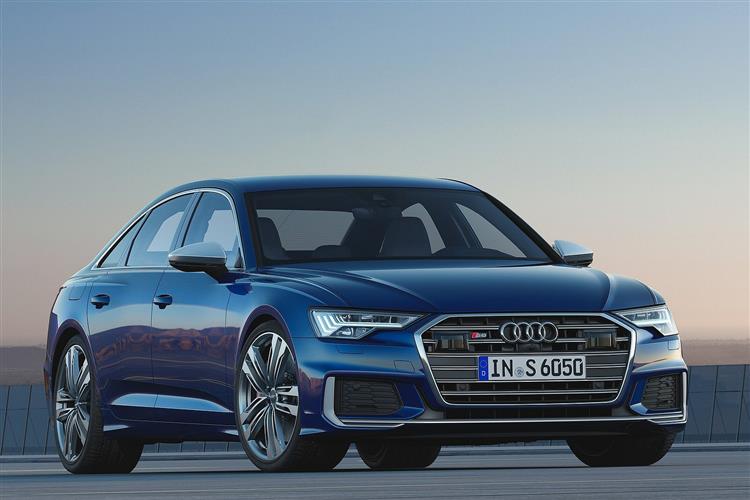 What's this? An Audi S6 with diesel power. Can that make sense? Jonathan Crouch drives it to find out.

While Audi's RS models have been getting progressively more powerful, some of its 'S'-badged sporting models have been going in the opposite direction. Take the S6. The third generation 'Type 4F' model which sold between 2004 and 2011 had a Lamborghini Gallardo-derived petrol V10 developing a massive 429hp. That was replaced in 2012 by a 414hp petrol V8 in the fourth generation 'Type 4G'-series model. Seven years later, this fifth generation 'Type 4K'-series car arrived with an output of 'just' 350hp. And you get a diesel engine, though a very impressively-specified 3.0-litre V6 TDI one. Anyway, don't worry: there are compensations. Pulling power this time round rises hugely despite the power output drop - from 550 to a massive 700Nm. So this S6 should prove as quick as its badge suggests it ought to be.

The 3.0-litre V6 TDI engine used here with its electrically-powered compressor is basically the unit originally introduced in Audi's SQ7 large SUV, but has been embellished here with a 48-volt electrical system, which has taken the powerplant's total power output to 350hp. All of those braked horses are transmitted via an eight-speed tiptronic automatic transmission to the car's quattro all-wheel-drive system. The electrically powered compressor is the major reason for this S6 model's startling performance. 62mph from rest takes just 5.0s in the saloon model - which is virtually the same as was achieved by the far more powerful 4.0-litre petrol V8 of the previous generation model. And you get that performance here with far more pulling power this time round thanks to dual supercharging that sees the electrically powered compressor working in tandem with the exhaust turbocharger and producing 700Nm of torque.

You won't be considering an Audi S6 if you want to shout about your performance pretensions. This car doesn't do that. In fact, over the years, it's got the whole business of not doing that down to a fine art. A lot of it's in the detail. Audi S cars have a reputation for styling subtlety and whether you order it as a saloon or an Avant estate, this one is no exception. This silver horizontal lower splitter creates an enormous feeling of width at the front, linking the two air inlets and ending with the two winglets at the air ducts. As with other A6 variants, piercing LED headlamps flank the wide Singleframe grille. Side-on, you'll notice these big 20-inch wheels with their 'S'-specific design. And perhaps also the wide sills and the silver door mirror casings. At the rear, the S6 features an integrated spoiler that visually extends the boot lid. A diffuser insert in dark chrome matt adds the finishing touch to the lower rear end. The four tailpipe trims are in gleaming chrome. The cabin is as well appointed as you'd expect from a range-topping A6 model, with beautiful monogrammed leather sports seats, and an S-specific graphic layout for the standard-fit Audi Virtual Cockpit instrument binnacle digital display which here features a central rev counter. The back seat offers reasonable space for three adults, but much more comfortable room for two and you get a fold down centre armrest with storage and cup holders. Out back, in this saloon model there's a 530-litre boot; if that's not enough, the alternative Avant estate variant gives you 565-litres.

Prices start at around £60,000 - that's for this S6 saloon variant. The alternative Avant estate model is around £2,500 more. In both cases, you can also specify a plusher 'Vorsprung' level of trim - but it'll cost you: think in terms of around £17,000 more for that. Bear in mind that for a slight premium over the price of the standard S6, you can have all the same engineering in the five-door A7 Sportback 'Gran Turismo'-style body shape if you'd prefer that. On the standard model, there are lots of options. You're probably going to want to pay extra for the lovely 'S sport seats with their integrated headrests. And you can add in ventilation and massage features, along with top-end Valcona leather to the front chairs. If you're thinking of taking your S6 to a track day (it'd certainly be fun to dismay the circuit regulars in a diesel car), then you'll need to consider the optional six-piston ceramic braking system, replacing the standard steel discs. The ceramic set-up is made from light, abrasion-resistant carbon fibre with 400mm discs at the front and 370mm discs at the rear. The complete ceramic brake system weighs nine kilograms less than its steel counterpart, so it significantly reduces unsprung masses with the effect of further enhancing driving dynamics, especially when cornering.

While the electrically powered compressor boosts the performance, the mild-hybrid system of this car helps to improve fuel efficiency. The 48-volt MHEV set-up comprises a 'BAS' belt alternator starter and a lithium-ion battery with a capacity of 10Ah housed in the vehicle floor beneath the luggage compartment. The BAS is connected to the crankshaft. During deceleration it can recover up to 8kW of power, which it then stores in the lithium-ion battery. When the driver accelerates again, the BAS reacts instantly by restarting the engine. MHEV technology allows for start/stop operation from a speed as low as 13mph. Thanks in part to the integration of the mild-hybrid system and the vehicle sensors, the S models realize a fuel saving of up to 0.4 litres in real driving conditions and can coast for up to 40 seconds with the combustion engine deactivated. WLTP fuel economy values for the S6 TDI Saloon range from 35.8mpg to 36.2mpg, equating to NEDC-correlated CO2 emissions of 164g/km. The figures for the S6 Avant are 34.9mpg to 35.3mpg and 171g/km.

It's tempting to dismiss this S6 on a number of grounds. For Audi owners, it's not as agile as an S4 that would save you plenty. And it's not as fast as the kind of RS 6 that wouldn't cost that much more. And that's before you even start to think about the talented opposition. But as soon as you do, you begin to realise that within its little market niche, this car is something quite special. It's also a very clever contender indeed. Over 35 miles to the gallon from a car that, de-restricted, would probably reach well over 180mph? And at the same time, pulling power that would embarrass most of this model's powerful petrol-engined rivals. So what if an RS6 is faster? Or an M5 or an E63 come to that. This, in contrast, is the stealth bomber of the executive segment, the car that creeps in under the radar. The only one in its sector with diesel drive. And the only one with Audi's S-inspired ring of confidence. Four rings in fact.