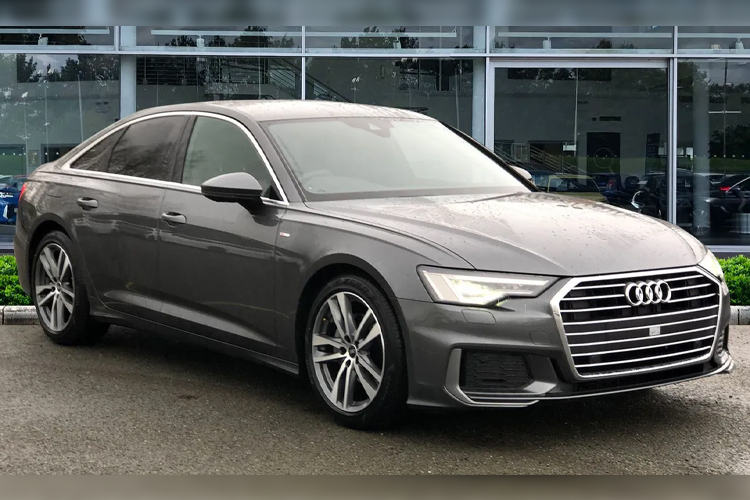 This is the most advanced Audi A6 Ingolstadt has ever brought us. Even in entry-level 40 TDI guise. Jonathan Crouch drives it.

While Audi's A6 has long been the world's best selling full-sized Executive car, it's rarely been Britain's overall favourite. Over the years, Audi has offered eight different models in this segment and with this 'C8'-series design, the fifth of them to be badged 'A6', there are fewer reasons than ever not to consider one. Whether you choose this saloon or the alternative Avant estate body style, this sleeker more sophisticated model is quieter, lighter, smarter and more technologically advanced than its predecessor. It offers, in Audi's words, 'a first class journey with a business class ticket' - or to put it another way, what the Ingolstadt brand has done here is to democratise much of the technology of its larger luxury segment A8 and offer it up more affordably to Executive sector buyers. That's in an attempt to prize sales away from class favourites like BMW's 5 Series, the Mercedes E-Class and Jaguar's XF. Here, we're going to test the car in entry-level '40 TDI' 2.0-litre diesel form.

Previous A6 models have never particularly prioritised a dynamic driving experience but this one offers a decent step forward in that respect, despite the fact that entry-level four cylinder models like this 40 TDI continue to buck the class trend by pushing power through the front wheels. Dynamically, that's a limiting factor, but with this 'C8'-series model, Audi's engineers have worked around it by building in a stiffer MLB-Evo chassis, a more sharply-responding variable 'Progressive' steering rack and a very effective optional adaptive damping system. Arguably the most important changes made here though, have taken place beneath the bonnet. The '40 TDI' 2.0-litre diesel unit we tested features Audi's latest MHEV mild hybrid technology and certainly seems quieter than the equivalent engine in the previous generation model and it's 204PS output represents a 14PS increase too, which arrives along with 400Nm of torque. For buyers, there's a choice of front wheel drive or quattro 4WD and either way, the drivetrain comes mated to the brand's 7-speed dual-clutch 'S tronic' auto gearbox. This transmission hasn't been particularly configured for traffic light Grand Prix-style starts, which is why 62mph from rest in a front-driven saloon A6 model like this one takes 8.1s, which is over half a second slower than rivals like BMW's 520d or the Mercedes E220d would manage. Once you're up to speed though, the engine really gets into its stride, actually out-performing those two competitors in the more important 30-70mph overtaking increment. There's an irrelevantly higher top speed too - 152mph.

According to Audi's research clinics, A6 customers value understated exterior design above almost everything else - so they should feel right at home with the conservatively evolved looks of this 'C8'-series eighth generation contender. This is now a pretty sizeable piece of sculpted Executive segment German real estate, being nearly five metres long and the best part of two metres wide, yet standing only just over 1.4-metres high. Classically elegant? Maybe not, but it's certainly handsome and sophisticated, with shaping that the brand reckons references its 'quattro genes'. The Avant version is exactly the same length as the saloon but is 10mm taller. Behind the wheel, you're going to need to like screens because this completely redesigned cabin can incorporate no fewer than three of them, largely replacing all the many buttons and dials of the previous A6. The two you'll notice first power up as soon as the door is opened and dominate the upper and lower parts of the piano black-trimmed centre stack. The gently curved upper display deals with the most important radio, media and telephone functions while the lower 8.6-inch monitor is reserved for more comfort-orientated mainly climate-related features. Both monitors interact with the optional 12.3-inch 'Audi Virtual Cockpit' instrument binnacle screen you view through the three-spoke wheel. At the back, thanks to 21mm of extra interior length, a 6ft 3-inch passenger can comfortable sit behind a driver of the same size. Audi says that this time round, legroom back here has increased by 17mm, while headroom is up by 10mm. There's a 530-litre boot in the saloon - or 565-litres in the Avant.

The mainstream focus in the A6 line-up centres around the two TDI diesel engines that were offered from launch. Many will opt for the front-driven '40 TDI' 2.0-litre four cylinder version with 204PS, which comes complete with standard 7-speed 'S tronic' dual-clutch auto transmission. At this level in the range, quattro 4WD is optional. As usual with the A6, there's the choice of either a saloon body style or, for a premium of £2,100, the Avant estate body shape. And there are two key trim levels - base 'Sport' or, for a £3,360 premium, the more dynamic 'S line' spec we tried. The standard 'Sport' model should deliver most of what you really want in terms of equipment. There's 18-inch alloy wheels, LED headlamps that automatically dip themselves at night, an acoustically-glazed windscreen, the 'Parking System Plus' all-round parking sensor system, a rear view camera, LED tail lamps, power-folding mirrors and an alarm. There's also a 'Progressive Steering' set-up that constantly alters the gearing of the steering depending on your inputs. Steering's one of the things you can influence via the settings of the usual Audi 'drive select' system that, as well as allowing you to tweak feel at the helm, also enables you to vary throttle response and gearshift timings to suit the way you want to drive. Inside, there's the brand's 'Twin'-style leather upholstery, with heated front seats featuring electric adjustment and 4-way powered lumbar support. The Avant version gets roof rails, a rear spoiler and a power-operated tailgate too.

Audi has equipped all mainstream A6 engines with 'MHEV' 'Mild Hybrid Electric Vehicle' technology built around a belt alternator starter and a lithium-ion battery. This four cylinder '40 TDI' variant gets a 12V version of this electrical system. When coasting in the highway with your foot off the accelerator at between 34 and 99mph, the engine can automatically switch itself off for up to 40 seconds to save fuel - Audi calls this 'Intelligent Coasting'. At slower speeds, the Mild Hybrid set-up maximises brake energy regeneration, providing for an increased energy recovery output of up to 12 kW. Finally, in traffic the MHEV package allows for an extended stop/start function that can work at up to 13mph, allowing the car to glide to a stop with maximum efficiency. Let's take a look at the fuel and CO2 figures, which we'll give you based around the smallest 18-inch size of wheel and the saloon body style. Obviously, larger rims - the 19-inchers of this 'S line' variant for example - will have a fractional impact on your returns. The Avant estate body style's extra 65kgs of weight affects efficiency by around 5%. The '40 TDI' can manage 62.8mpg on the combined cycle and 117g/km of CO2, which equates to a Benefit-in-Kind taxation rate of 28%. That's pretty much the same as you'd get from a rival BMW 520d and a fraction better than you'll get from rival Mercedes E220d.

And in summary? Well this 'C8'-series A6 meets the required brief, especially in this 40 TDI guise, and restores full credibility to an A6 model line that had previously become a rather forgotten choice in its sector. Yes, to really like it, you've still got to really like Audis, but if you do, you'll find it easier than ever to bond with this one. Some may still see this A6 as being a little remote compared to a status-conscious Mercedes, a proudly opulent BMW or a wood-panelled Jaguar. For others though, that'll simply be part of this car's vorsprung durch tecknik appeal, its design full of intelligent technologies created to make your life easier and save you time. Is that all that really matters? At the end of the kind of very long day this A6 has been designed for, you might well think so.