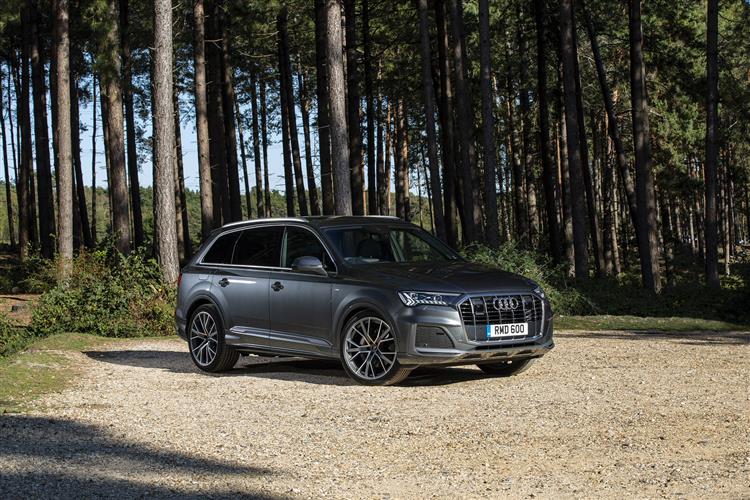 Ever since the original version of this Q7 was first launched in 2007, it's been a vehicle that middle-England families have always rather liked but, if truth were told, felt a bit awkward about owning, the MK1 Q7's sheer size, power and weight hardly in keeping with these eco-conscious times. The MK2 model, launched in 2015, improved things, thanks to a lighter platform shared with premium brands like Bentley and Porsche. But this car was still a huge thing. Now though, with Mild Hybrid engines and the option of Plug-in power, it claims to have a better eco-footprint, enabling you to consider one with a clearer conscience. Which is nice because for many - ourselves included - there remains something tantalisingly tempting about this big Audi. The way it dominates the road as it'll dominate your driveway. You'll want to justify buying one - but will you be able to? Let's find out.

Audi is offering its latest 48-volt mild hybrid engine technology with the revised version of this second generation Q7. There are two diesel options; there's a 231PS '45 TDI' variant but most buyers will choose the '50 TDI' 286PS diesel powerplant. It's one of Audi's best, creamy smooth, superbly refined and generally torquey, equipped with 600Nm of pulling power. Alternatively, there's a 340PS 3.0-litre petrol engine, badged '55 TFSI'. You can also ask your dealer about two petrol Plug-in hybrid models too, the 55 TFSIe, with 380PS and the 60 TFSIe Competition, with 455PS. At the top of the line-up, there's the 507PS petrol-powered SQ7 V8 TFSI. Across the range, Audi's worked on the drive dynamics and reckons this improved car is more manoeuvrable, precise and agile in urban traffic and on hairpin bends, particularly in top 'Vorsprung' specification which includes all-wheel-steering as standard. That allows the car to turn into corners quicker and be more manoeuvrable at parking speeds. Adaptive air suspension is now standard across the range. This provides variable ground clearance and better prepares the Audi Q7 with its standard quattro drive for terrain off the beaten track. The relevant offroad mode can be selected via the standard 'Audi drive select' dynamic handling system with its seven profiles. 'Black Edition' and 'Vorsprung' versions are equipped with the slightly tauter adaptive air suspension sport with a lower ride height than the standard air suspension system.

This revised version of the second generation Q7 adopts the large octagon Singleframe grille of its Q8 showroom stablemate, this feature incorporating six upright slates and giving the car a more aggressive look. Matrix LED headlights are now standard and at the rear, a chrome strip now connects the LED tail lamps. Big wheels vary in size between 19 and 21-inches and 11mm of length has been added as part of the re-design. As before, three seating rows are standard. Inside, the Q7 gains the hi-tech piano black twin-screen haptic feedback control panel we're now used to from the brand's other larger models And the fully-digitalised 'Audi Cockpit' screen you view through the wheel is standard. Versus its direct competitors, the Q7 has a greater interior length as well as more headroom and elbow room in the front and rear. Depending on the position of the rear seat backs, the luggage compartment offers between 865 and 2,050-litres of capacity across a flat load area. An electric tailgate is standard and when the optional 'Comfort and Sound pack' is specified it also brings foot-activated gesture control for even easier opening. Versatility is further increased by the standard 'rear bench seat plus', which adds individual fore/aft movement and backrest angle adjustment for the middle seating row.

Expect to be paying from just over £56,000 to around £95,000 for your Q7, depending on the variant you want. For that, you'd want a very high standard of specification - and this Q7 doesn't disappoint. There are four trim levels - 'Sport, 'S line', 'Black Edition' and 'Vorsprung'. Even base 'Sport' variants get fully digitised instrumentation and the 'MMI navigation plus' infotainment package delivers top-of-the-line connectivity by incorporating LTE Advanced streaming, a Wi-Fi hotspot, natural voice control and the extensive Audi connect portfolio, opening up everything from online traffic information and navigation with Google Earth to hybrid radio. The cloud-based Amazon voice service Alexa, which is integrated into the MMI operating system, is also new. Top 'Vorsprung' variant include just about everything you could possibly want. With 22-inch wheels, S line detailing and a black styling pack, they show the remodelled Q7 body in its most impactful light and their powered soft-close doors set the tone for the exceptional comfort and luxury within. Occupants are treated to ultra-supportive front super sport seats with diamond-stitched Valcona leather upholstery, climate control and a massage function, plus an extended leather pack taking in the door pull handles, armrests and lower door trim, the front centre console trim and the underside of the instrument panel. Seat heating is also expanded to the second row, and attention is even lavished on the roof, which gains a soft-touch Alcantara headlining. The brand's 3D BOSE surround sound system is also installed to fill the interior with virtually cinematic sound quality.

The now-standard mild hybrid technology plays a major part in the efficiency of the engines on offer here. It can reduce consumption by up to 0.7 litres per 100 kilometres. Its central component, the belt alternator starter (BAS), powers a 48-volt main electrical system in which a compact lithium-ion battery stores the energy. During braking, the BAS can recover up to 8kW of power and feed it back into the battery. If the driver eases off the accelerator at speeds of between 34mph and 99mph, the Audi Q7 recuperates energy, rolls at idle or coasts for up to 40 seconds with the engine switched off. The BAS restarts the engine the next time the accelerator is depressed, and does so faster and more gently than a conventional starter. The startstop range begins at 13mph. This works with a clever starter motor / generator system and allows the car to coast at both high and low speeds using 48V electrical assistance. Hence the provision of efficiency figures that are difficult to better amongst large luxury SUVs. The volume 45 TDI version offers 33.2mpg on the WLTP combined cycle and 184g/km of NEDC-rated CO2. The two plug-in petrol Q7 models can offer around 26 miles of all-electric driving range and can recharge from a 7kW home charger in around two and a half hours. As before, all models have an unremarkable 3 year 60,000 mile warranty.

Here's a big Audi SUV that, in an eco-conscious world, you could now own proudly, rather than slightly awkwardly. A statement of technology and innovation with electronic intuition anticipating needs you didn't know you had. As well as simply a very plush and practical way to transport your household just about anywhere. It looks the part, the badge works for the boardroom, it's as capable off road as most will ever need and the seven-seat format is fine for families. True, there are rival large SUVs that are better to drive in this segment - but none of them are as practical. And yes, there are certainly others that are significantly cheaper - but none of them are as advanced. In summary, we're left with a car that's slimmed down and shaped up. Audi are certainly aware that a model of this kind can never be completely eco-centric, but as they've proved in this case, there's certainly plenty that can be done to reduce its environmental impact. In short, what we have here is simply this: a lesson in Vorsprung durch Technik.