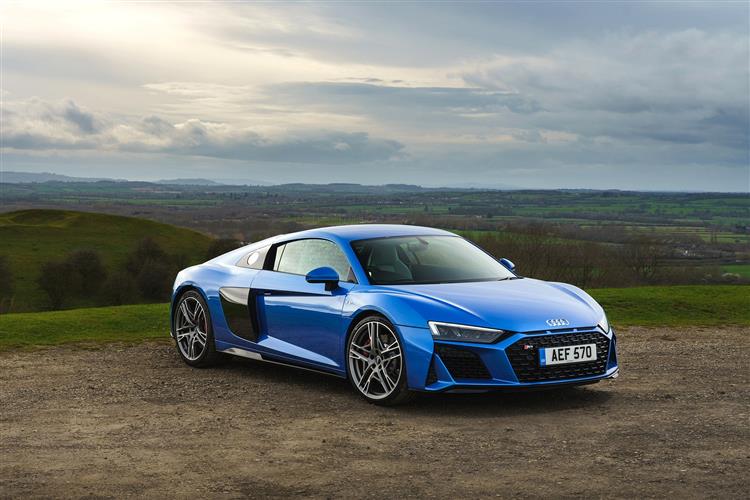 Models like the Audi R8 don't come about very often. By that we mean sports cars that redefine what you think a vehicle manufacturer is capable of. In living memory, Audi has probably had two: the original all-wheel drive Quattro and the R8. I guess a case could be made for the excellent V8-engined RS4, but it didn't break the mould in any particular regard. It's hard to believe that the R8 was launched in 2006, a year Porsche got a double-whammy from both Audi and Nissan, with its magnificent GT-R. The R8 had a light refresh back in Spring 2012, when it got a better automatic gearbox, an more powerful V10 Plus version and a very subtle restyle, but that was just a means to see the MK1 design through the last couple of years of its life. In its place in 2015, we got this second-generation R8 model, here usefully improved.

The big news with this second generation R8 is that there's more power. The standard V10 engine gets a 30PS increase to 570PS, while the previous 'V10 plus' version (now re-branded the 'V10 performance' model) gets a 10PS increase to 620PS. As for oither changes, well modifications to the suspension provide more stability and precision. Plus the assistance has been retuned both with the optional dynamic steering and the electromechanical power steering. In addition, Audi Sport has made the distinction between the profiles available as part of the Audi drive select dynamic handling system - comfort, auto, dynamic and individual - clearer. Thanks to the enhanced Electronic Stabilisation Control (ESC), the Audi R8 V10 performance brakes from 62mph to a standstill up to 1.5 metres earlier; the stopping distance from 124mph is up to five metres shorter - in each case depending on the exterior conditions. The range is now built purely around quattro 4WD and as usual, only an S tronic twin-clutch sequential auto paddleshift 'box is offered. Otherwise, it's much as before. The R8 V10 performance model is the most powerful Audi road car ever built. That's serious stuff and so is a sprint to 62mph in around 3 seconds and a top speed of well over 200mph. The suspension is the same basic layout of double wishbones front and rear, mated to steel springs and dampers or there's an optional Magnetic Ride system that delivers continuously variable damping control. Where possible, weight has been excised from the suspension parts, Audi claiming that it has used lighter components developed through its LMP and LMS racing programme.

The visual changes made to this improved model are extremely subtle. The Singleframe radiator grille has a wider, flatter line. Thick bars divide up the large air inlets, and flat slits in the hood are reminiscent of the Audi Ur-quattro brand icon. The smarter front splitter is now wider, underscoring the focused look. The air vent grille runs across the full width; the diffuser has been drawn upward, making the R8 seem even wider. In the engine compartment the air filter is situated under a new, three-part cover, which is available in a choice of plastic or carbon fibre. Otherwise, its as you were before. The customisab;e sideblades continue to be a talking point. 19-inch alloy wheels are fitted as standard to both models, but there's also an option of a 20-inch rim if you want it. If you like the idea of open-top motoring, there's also a Spyder version. Inside the car, there's the usual Nappa leather sports seats while the V10 performance model gets deeper bucket seats. A flat-bottomed steering wheel houses two 'satellites' incorporating the control buttons for the Audi drive select system and engine start-stop function. Go for the V10 performance and there are two more satellites. One houses a button controlling the exhaust system's sound-altering adjustable flaps. The other deals with the activation switch for the 'performance mode' which is standard for this version (and optional for the standard V10), along with a rotary wheel enabling selection of this mode's individual 'dry', 'wet' and 'snow' programs. The 'Audi virtual cockpit' digital instrument binnacle continues here. It sits in the conventional speedo and tach binnacle, this 12.3-inch display allowing the driver to toggle between different display modes as well as a custom 'individual' mode. In 'performance mode', the driver is presented with information on the driving programs, acceleration, deceleration and lateral forces, as well as power and torque. There's even a shift light which illuminates when the rev limit has been reached.

Lasers. You got them here first. As standard, the R8 comes with an all-LED headlight pack, but laser spots can be optioned onto the R8. Go for the V10 performance version and they're fitted as standard. The rear LED tail lamps are slick too, with a scrolling function in the intended turn direction. Clearly all this comes at a price and in case you're curious as to what that is, you might want to take a seat. The entry-level car costs around £125,000, while the V10 performance will need a budget of around £150,000 by the time you've added a few well chosen extras. R8 customers can choose from three exterior packages depending on the engine variant; these packages add various highlights to the front splitter, the side trims and the diffuser. Standard specification for the R8 V10 quattro with 570PS is high-gloss black; the top-of-the-line version R8 V10 performance quattro with 620PS comes off the production line with a matt titanium look. The high-gloss carbon package is available for both engine variants. As an option, the Audi rings and badges on the exterior are painted in high-gloss black; the new metallic colours Kemora grey and Ascari blue are recent additions to the paint range.

The R8 may well be the sensible mid-engined supercar but don't let that lull you into the false belief that it'll be cheap to run. Still, Audi has done its best. The V10 FSI powerplant comes with direct and indirect injection and Cylinder on Demand technology linked to a hi-tech start-stop system that'll cut the engine when you don't need it, stuck in traffic or waiting at the lights. Then there's the Multimaterial Audi Space Frame construction that helps to reduce weight by up to 50kg. As a result, even the V10 performance variant manages 23.9mpg on the combined cycle. Keeping the basic look much the same will protect residual values of previous R8 models, and they were still holding up strong before this improved second generation model was announced.

Further improving the Audi R8 must have presented a few headaches. Back when the original MK1 design was originally launched, it was a rival for a Porsche 911 Carrera S. That's changed. Now it's way above the price of even the most expensive 911 Turbo. This, one feels, isn't exactly by chance. Volkswagen owns Porsche, Audi and Lamborghini, so it needed to slot the products into some sort of non-competing order. With V10 engines and rapid-fire sequential gearshifts, the latest R8 is laser-focused, and hasn't lost any of its wow factor. Sit inside and it's impossible not to be impressed by the Virtual Cockpit, with its myriad of purposeful-sounding buttons that hang off the steering wheel and just beg to be prodded. Then there's the general build quality, which is all soft buttery leathers and cool turned aluminium finishes. More power, less weight and more exaggerated supercar dimensions complete a compelling argument. The R8 has evolved. Now it's up to you to try to keep up.