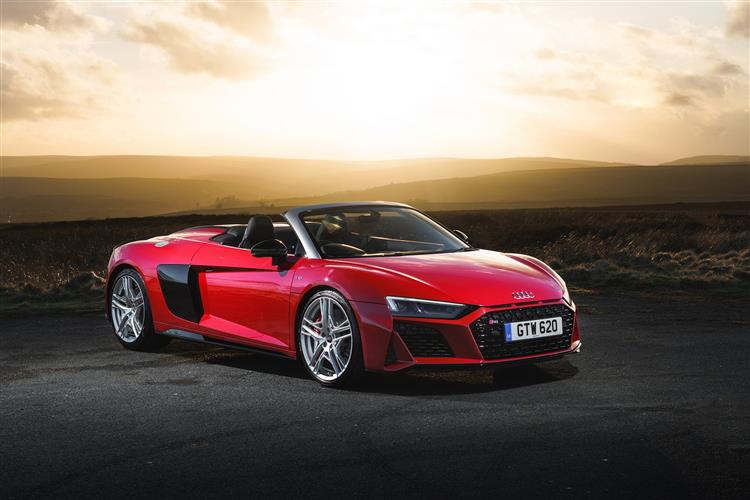 The improved version of Audi's desirable second generation R8 sportscar is even more appealing in open-topped Spyder form. Jonathan Crouch checks it out

An Audi supercar was the last thing anyone would have expected back in the 80s and 90s when customers had the choice of only three Audi models and weren't buying any of them in any great numbers. Today, the Ingolstadt maker's range is vast and the R8's existence is taken for granted. Sharing many components with the Lamborghini Huracan, this model is as good a symbol as any of how far Audi has progressed and of all the R8 derivatives, it could be the Spyder convertible that best showcases the brand's all-conquering ambition. In second generation form, this car is less of a style statement and more dynamically adept, thanks to Audi Space Frame technology that makes it a far tauter driving tool. And in this improved form, it still looks as eye-catching as ever.

As with the coupe R8, Spyder buyers get a mighty mid-mounted 5.2-litre FSI V10 normally aspirated engine with dual injection system, dynamic throttle response and a distinctive hard-edged soundtrack which can be amplified further by an optional sport exhaust system with gloss black tailpipe trims. There's a choice of two versions of this engine. The standard one delivers 570PS of power (30PS more than before), offering phenomenal performance, 62mph occupying under 4 seconds on the way to a top speed of of well over 190mph. If you want to go even faster, the V10 performance model gives you 620PS (10PS more than previously), enough to see 62mph achievable from rest in only a fraction over 3 seconds en route to a top speed of around 200mph. Older owners' toupees will need to be firmly tied down. Or at least they'll need to be if the fabric hood is open: it retracts in just 20 seconds and can be operated at speeds of up to 31mph. Behind the V10, there's a seven-speed S tronic transmission with lightning-fast action and power is distributed by a cleverly designed quattro drive system which distributes the torque to front or rear according to the driving situation - in extreme cases, up to 100 percent to the front or rear wheels. The dynamic handling owes much to the engine's low mounting position, which is achieved thanks to dry sump lubrication. The wheels are controlled by lightweight aluminium wishbones - a layout that reveals motorsport DNA. The electromechanical power steering provides feelsome road contact and can be supplemented with dynamic steering as an option.

As ever, the R8 embodies Audi's wealth of expertise in ultra-lightweight design. The aluminium body of this Spyder with the Audi Space Frame (ASF) weighs just 208kg, keeping total weight down to just 1,612kg. This design's elegant, lightweight fabric top, with its largely aluminium and magnesium linkage, perfectly complements this approach. What's more, torsional rigidity has increased by 50% compared with the previous model. The visual changes made to this improved model are extremely subtle. The Singleframe radiator grille has a wider, flatter line. Thick bars divide up the large air inlets, and flat slits in the hood are reminiscent of the Audi Ur-quattro brand icon. The smarter front splitter is now wider, underscoring the focused look. The underbody has a smooth trim, to improve the aerodynamics. And at the rear, a large diffuser increases the downforce - two solutions taken directly from motorsport. The R8 Spyder V10 is almost entirely hand-built at the "Audi B?ellinger H?efe" purpose-made production plant near Neckarsulm. At the wheel, the standard Audi virtual cockpit presents all information in richly detailed, high-resolution 3D graphics on a 12.3-inch monitor. The driver can choose between three screens - the classic view, the infotainment view and the performance view. Owners taking to the racetrack will particularly appreciate the latter, which supplies data on torque, power output, oil and tyre temperatures, lap times and g-forces. The displays around the speedometer and rev counter can be customised to individual preferences. The sport seats for driver and passenger come as standard. Alternatively Audi can supply bucket seats for even better lateral support.

You're going to need a budget of at least around £137,000 for your new R8 Spyder - or around £150,000 if you want the top 'performance' version. For that, you'd expect plenty of equipment and an exquisite finish - and you get it. Over and above the extensive standard equipment, customers have almost unlimited scope to tailor both the interior and exterior to their individual preferences. Body components such as the front spoiler, the diffuser and the new sideblades are also available in carbon. The Bang & Olufsen Sound System is an R8 Spyder highlight, Audi having integrated two head restraint loudspeakers into each seat, for an excellent audio experience even when driving with the hood open. As standard, the R8 comes with an all-LED headlight pack, but laser spots can be optioned onto the car. Go for the V10 performance version and they're fitted as standard. The rear LED tail lamps are slick too, with a scrolling function in the intended turn direction. R8 customers can choose from three exterior packages depending on the engine variant; these packages add various highlights to the front splitter, the side trims and the diffuser. Standard specification for the R8 V10 quattro with 570PS is high-gloss black; the top-of-the-line version R8 V10 performance quattro with 620PS comes off the production line with a matt titanium look. The high-gloss carbon package is available for both engine variants. As an option, the Audi rings and badges on the exterior are painted in high-gloss black; the new metallic colours Kemora grey and Ascari blue are recent additions to the paint range.

Efficiency technologies such as the freewheeling mode, in which the R8 coasts with the engine decoupled, have helped with fuel efficiency - but don't expect too much. Official figures suggest that around 22mpg is possible from a V10 performance model, but if you regularly replicate that, you probably shouldn't have bought this car in the first place. The returns you do get are aided by the 5.2-litre FSI engine's clever 'COD' 'Cylinder on Demand' technology. When one of the four upper gears is engaged, this shuts down the cylinders on either the left or the right bank of the engine. Which means that at low speeds when you're driving off-throttle, you'll probably be at the wheel of a V5 rather than a V10 R8. What else? Well, you'll be able to get your R8 serviced at any Audi dealership and there's a choice of fixed or flexible pre-paid plans, depending on whether you cover more or less than 10,000 miles a year. We're slightly disappointed by the three year 60,000 warranty though, particularly given that the mechanically-identical (and supposedly more temperamental) Lamborghini Huracan comes with a four year unlimited mileage package. The three year deal you get with equivalent McLaren and Porsche models is also unlimited mileage too. On to residuals. With only around 30 cars each day being hand-built at Audi's Neckarsulm factory, there's enough rarity value about this R8 to keep residuals buoyant.

It seems there are no limits to Audi's ambition and having grown its mainstream range exponentially over recent years, it's also established itself as a supercar manufacturer to be taken very seriously. The R8 Spyder sits at the top of the Audi pile, adding a slickly engineered fabric hood to the standard R8 package. It's a touch more visually elegant than the muscular coupe but those all-wheel-drive V10 mechanicals mean there will be no let-up in its performance. The MK2 model improvements haven't fundamentally affected this car's appeal, but they're welcome nonetheless, further smartening the already jaw-dropping looks. Do you really need more than this in a lottery-winning convertible supercar? You'd have to wonder..