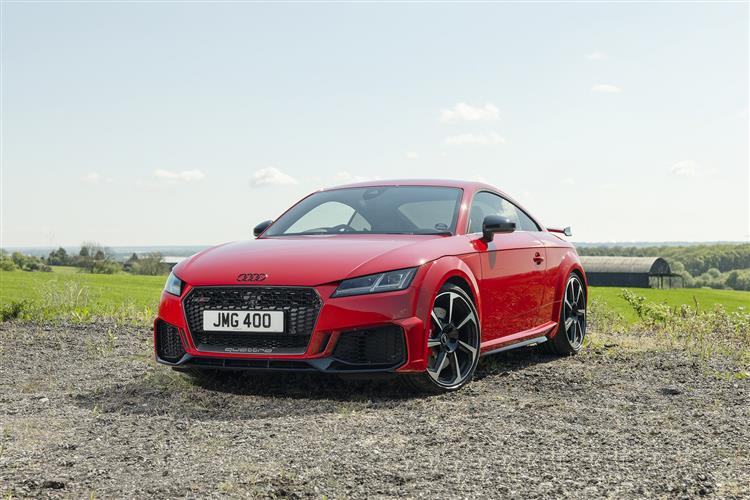 The RS derivative of Audi's TT is the most powerful version of this car we've seen yet. Jonathan Crouch takes a look at the improved version.

The Audi TT started life as a design icon, an acutely modern trinket to be looked at and lusted after but one that never completely convinced as a driver's car, perhaps, in truth, because it was little more than a Volkswagen Golf with a prettier look. The current improved third generation version though, is much more its own car, so the idea of a 400PS 2.5-litre TFSI engine beneath the bonnet has quite an appeal. If you're a real Audi fan, the combination of four-wheel drive and a charismatic five cylinder turbo can really only bring to mind one car: the legendary 1980 Audi Quattro. This RS, the Germans tell us, is its spiritual successor. No pressure there then. Yet you can't deny that it's been equipped for the task. It's a tantalising prospect.

You buy an Audi TT RS for its engine. If you merely wanted a very quick Audi TT, the TTS model with its 2.0-litre four-cylinder turbo engine more than fits the bill. It's good for 306PS and delivers its power effectively in almost all weathers. The RS is an altogether more charismatic thing, the warbling of its in-line 2.5-litre five-cylinder engine harking back to more famous Quattros of the past. In RS guise, that engine has been massaged to 400PS in its current form. It only comes mated to 7-speed S tronic twin-clutch transmission and will catapult you from rest to 62mph in just 3.7 seconds in Coupe form. The Roadster is only two tenths of a second slower and whether you choose soft top or metal roof, the top speed can be 174mph if you ask your dealer to remove the 155mph limiter. And through the corners? Well, the progressive steering, whose ratio becomes ever more direct with increasing steering input, is RS-tuned. Targeted spring and damper modifications make the chassis with technically elaborate four-link rear suspension more dynamic and precise. The body sits ten millimetres lower than the base model, and this also applies for the optional 'RS sport suspension plus with Audi magnetic ride' set-up. Here, the damping characteristic can be changed electronically using the Audi 'drive select' driving mode system.

The TT RS has never looked so athletic, whether you order it on coupe or open-topped roadster form. The redrawn front end and the striking rear give it a dynamic appearance and LED headlights are standard. Lateral air inlets, which have been enlarged onc this revised model, are each divided by vertical strips on the inside and outside and extend almost all the way to the front wheel wells, making this TT RS appear extremely wide. For cooling purposes there are additional radiators located behind the typical RS honeycomb grill. At the rear, a newly designed fixed rear wing with side winglets catches the eye. Two large oval exhaust tailpipes create the signature RS finish. Inside, the controls and display in the TT RS are focused completely on the driver. There are RS sport seats and RS logos on the seats, steering wheel, door sill trims, and selector levers. Plus special RS displays in the standard 12.3-inch Audi virtual cockpit instrument binnacle screen provide information on tyre pressure, torque, and g-forces. In manual mode, the shift light display prompts the driver to upshift when the maximum engine speed is reached. In addition to multifunction buttons, the RS sport leather steering wheel with shift paddles features two satellite controls for turning the engine on and off as well as the Audi drive select dynamic handling system.

Prices for this TT RS start at around £55,000 for the Coupe model and you'll need the best part of £60,000 for a well-specified Roadster version. So yes, you're looking at Porsche 718 Cayman S and Porsche 718 Boxster S money. Options include the Audi 'MMI navigation plus with MMI touch' package, including free text search and natural voice control, as well as the 'Audi connect' online module with its Wi-Fi hotspot. Using the 'Audi phone box' package, compatible mobile phones can be charged inductively and paired with the onboard antennae for optimal reception. The latest Audi smartphone interface technology displays selected apps from the handset directly in the Audi virtual cockpit instrument display. And the Bang & Olufsen sound system will be a highlight for fans of audio acoustics. The TT RS Coupe and the TT RS Roadster are fitted as standard with 19-inch cast wheels. The optional RS design package adds red or blue highlights to the car on the air vent doors, the seat belts, and the floor mats with the RS logo. The extended RS design package also offers contrasting design elements on the seats and centre console. As a further option, the RS sport suspension plus is available with adaptive dampers in Audi magnetic ride technology. Their control technology is also integrated into the Audi drive select dynamic handling system.

Audi has worked hard at improving the fuel economy of this RS model's 2.5-litre TFSI engine and given the performance on offer here, the efficiency figures are pretty impressive. The WLTP-rated figures (converted back to NEDC2-spec) suggest a combined cycle figure of 34.9-35.8mpg and a CO2 emissions reading of 183-181g/km. The might of this award-winning powerplant is channelled via a seven-speed S tronic transmission. The dual-clutch transmission impresses with high efficiency and a large spread - its lower gears are short and the seventh gear has a long transmission ratio to reduce consumption. A plate heat exchanger controls the temperature of the transmission oil; a new angle drive to the propeller shaft reduces the weight by about two kilograms. It all helps. The TT RS model's cachet will keep residual values sturdy - in the short term at least - though if you go too far in expensive options, you'll still feel the pain come resale time. Insurance isn't going to be cheap. And if you're thinking of doing some trackday tyre smoking, bear in mind that the bespoke tyres supplied will be fearsomely pricey to replace.

Anyone who still thinks Audi's TT is a bit soft is way behind the times. In this RS guise, it can live with the fastest and the best, accelerating as if on a mission, gripping the road like a limpet and it turning into corners like a shark turning towards a meal. Is it as charismatic as the original Audi Quattro? Perhaps not. Is it a better sportscar? Very definitely yes. But then, bettering a 30-year old design, you might think, isn't too difficult. Matching the cream of the world's finest £60,000 sportscars: well that's a lot more difficult. That this Audi does it so easily should make rival brands worried.