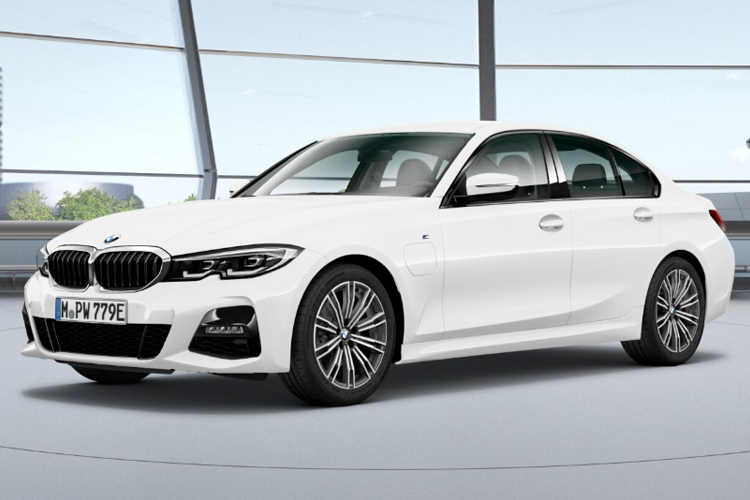 The 330e Plug-in hybrid is the technological flagship of BMW's current 3 Series line-up. Now, it has wider appeal. Jonathan Crouch takes a look.

Not everyone wanting futuristic engine technology wants their car to also look futuristic. To look like BMW's i3 for instance. If you're buying from this Bavarian brand and want a petrol/electric powerplant, the 330e Plug-in hybrid offers a more subtle way to go. You get 37.3 miles of all-electric driving range when the car's charged up, which enables the creation of some impressive overall stats - up to 217.3mpg on the WLTP combined cycle and as little as 30g/km of WLTP-rated CO2. Those figures fall only fractionally with this Touring estate body style. Take some time to understand BMW's thinking here and it's hard not to be impressed.

This current 330e Plug-in hybrid took a big step forward over its predecessor, the main difference between the two cars found when it comes to measurement of all-electric driving range. This was rated at only 21 miles in the previous generation 3 Series plug-in but in this current 330e design, BMW clams up to 37 miles of zero emissions motoring from a fully-charged set of batteries. In other words, if you've a pretty typical daily commute, you might never have to fuel up this car to complete it. As you might expect, this kind of cleverness comes courtesy of a very advanced powerplant indeed, in this case a combination of the 184bhp 2.0-litre petrol unit from the 320i mated to an electric motor incorporating an 'XtraBoost' function. This can increase power to as much as 293hp, reducing the 62mph sprint time to six seconds exactly. The hybrid system's extra weight drops maximum speed slightly over that of the ordinary 320i, but it's still rated at 143mph. The brand's xDrive 4WD system is now available on this variant.

This isn't the kind of Plug-in hybrid model you'll buy if you want to make an eco-statement. Unless you really know your BMWs, there's almost nothing to visually differentiate a 330e from any other 3 Series saloon unless you happen to spot the side panel charging flap. The 3 Series styling theme by now should be familiar to almost every business buyer. Classic cues like the kidney grille at the front, the sharp lines of the flanks and the powerful rear end are all present and correct. The cabin looks predictably smart, with chrome finishing and high-gloss surfaces. This 'M Sport'-trimmed models get the full 'Live Cockpit Professional' package which gives you a 12.3-inch virtual instrument binnacle screen and a 10.25-inch centre-dash iDrive monitor. There's some clever stuff incorporated into this pricier set-up, including gesture control and what BMW calls an 'Intelligent Personal Assistant', which works a bit like the 'Siri' or 'Google Assistant' systems you might use on your 'phone and is there to answer questions you can voice to the car as you drive it. And out back? Well the 330e saloon's luggage bay measures 375-litres - that's 105-litres down on a conventional four-door 3 Series model. This Touring estate 330e derivative has a 410-litre boot, extendable to 1,420-litres - which is 90-litres down on a conventionally-engined 3 Series Touring model.

The 330e now comes in both saloon and Touring estate guises, plus there's a choice of either rear-driven or 4x4 xDrive formats. You get four trim levels to choose from - 'SE', 'Sport', 'M Sport' and 'M Sport Pro Edition'. Prices start at around £40,000 and rise to around £50,000. As with all Plug-in hybrids, you have to have automatic transmission. The xDrive set-up commands an extra premium of around £1,500. There's a premium of £1,500 for this Touring estate body style. Key rivals include include two models from Mercedes (the C300e and the CLA 250e), the Volvo S60 T8 Plug-in Hybrid and, if you're prepared to compromise on a premium badge in return for a bit of extra space, the Volkswagen Passat GTE and the Skoda Superb iV. Even base 'SE' trim gets you plenty of kit that previously you'd have had to pay extra for on a 3 Series - things like Adaptive full-LED headlamps, a Parking Assistant that automatically steers you into spaces, a reversing camera, acoustic side glass and 3-Zone air conditioning that allows rear passengers to set their own climate. BMW has even standardised its lovely 'Welcome Light Carpet' that illuminates the ground around the front doors when you get into the car or step out of it at night.

Despite the fact that these days there's no longer the government contribution towards the purchase price that helped to boost sales of earlier versions of the old 'F30'-series 330e, BMW still reckons this plug-in derivative will be a strong seller. The installation of a more capable 12.0kWh lithium-ion high-voltage battery has nearly doubled its potential electric driving range - to as much as 37.3 miles. And increased the all-electric top speed potential to 68mph. Charging time for the 12.0kWh battery is around two and a half hours from a conventional 7kW garage wallbox or plug-in public charge point. Hook up to a domestic 3-pin socket and the charging time will be just under five and a half hours. As usual with Plug-in hybrids, the official WLTP combined cycle fuel figures - up to 217.3mpg for the saloon and up to 201.8g/km for this Touring version - need to be taken with a pinch of salt, but the important thing is that the government believes the quoted CO2 return - which can be as little as 30g/km in the saloon or up to 32g/km in the Touring. Either way, this means a super-low Benefit-in-Kind taxation rating of 10%. Of course it's unlikely that you'd ever achieve the quoted mpg and CO2 figures in the real world, but the important thing is that the government believes them, hence the attractive tax breaks that'll come as part and parcel of 330e model ownership.

Here, BMW has brought us a hybrid 3 Series model that makes real world sense. The previous generation 330e struggled a little in this regard with its relatively restricted all-electric driving range. Fortunately, technology has moved on and this current 'G20'-series 330e model demonstrates just how far. If you were thinking of a high-spec diesel-engined version of this Bavarian contender, we think you really have to look at a 330e as a realistic alternative. The waiting lists for this variant suggest that many potential customers already are.