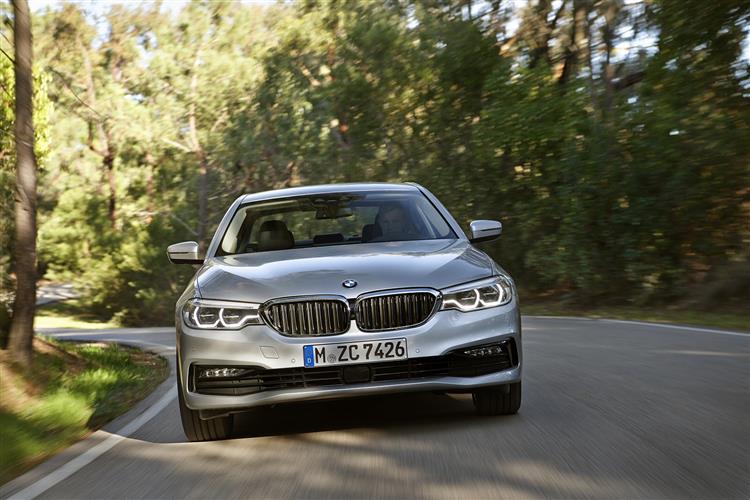 This seventh generation version of BMW's Executive-segment 5 Series contender is the first to get plug-in hybrid technology. It's a big step forward from the non-Plug-in engineering that featured in the previous MK6 range's disappointing ActiveHybrid5 model. Certainly, the fuel and CO2 figures of this 530e variant look promising, though whether they'll be remotely achievable in normal day-to-day use is of course another question. Perhaps an even bigger question s whether plug-in technology is merely a stopgap solution until hydrogen fuel cell cars hit the market in a few years time. If it is, it's a very tempting one.

Enthusiasts have bemoaned the fact that BMW's traditionally perfect 50:50 weight distribution has been lost with this car. Here, it's actually 47% front and 53% rear instead. That of course is down to the unusual mechanicals, a 182bhp four cylinder 2.0-litre turbo petrol engine mated to a 111bhp electric motor powered by a 9.2kWh battery pack under the rear seats. It all produces a combined output of 252hp and drives through the usual 8-speed automatic gearbox, with 62mph possible from rest in just 6.1s. The top speed is 146mph - or 87mph on all-electric power alone. There's an energy management system that ensures a seamlessly and efficient transition between the petrol and electric motors. When braking, the car can harvest kinetic energy, which is the used to help recharge the batteries. Most of the time, you'll be driving the car in its 'Auto eDrive' mode which sorts out the ratio of electrified or fuel-driven motoring (depending on trim variant, there's up to 36 miles of battery-driven progress possible if everything's been charged up). If you want to keep things in milkfloat mode, there's a 'Max eDrive' mode option.

You'll need to be eagle-eyed to spot the visual differences between this 530e variant any other, more conventional 5 Series models. iPerformance models like this one get unique styling to set them apart from the rest of the range, which includes BMW's traditional kidney grille getting blue slats. The wheel hubs are a blue alloy and eDrive badges have been added to the c-pillars. However, the biggest clue that this is a plug-in electric vehicle is the charging flap on the passenger side front wing of the car. Inside, the 530e gets an iPerformance menu called eDrive, which can help you save fuel and monitor battery reserves. You'll also find eDrive labelling on the door sills. Otherwise, it's business as usual. So there's a luxurious interior, dressed in leather and high-quality materials. You get BMW's iDrive infotainment system complete with optional gesture control. By using a 3D sensor, it allows you to operate it at the swipe of a hand or the pinching of fingers. The bootspace figure falls from the 530-litre capacity you'd get in an ordinary 5 Series to 410-litres.

Should you choose this 530e over an equivalent 530d diesel model? That's the question many potential buyers will be grappling with. The 530e will actually cost you slightly less than its showroom counterpart, coming in at around £47,000 in base 'SE' form. Around £3,000 more gets you 'M Sport' trim. And with either spec, there's the option of xDrive AWD for a couple of thousand more. Like all 5 Series models, this one gets Dakota leather trim, a high quality stereo and a Bluetooth telephone kit, plus Apple CarPlay integration. And, as you'd expect, there's a wide choice of options. There are sports seats (standard on M Sport models) and 'Comfort' seats that can be specified with a Massage function: in both cases, soft Nappa leather and decorative contrast stitching are optional. The extra cost Head-Up Display system will be popular too, now featuring a projection area that's around 70% larger than in the previous model. There are key changes with this generation 5 Series range with Driver Assistance systems. Dynamic and Active Cruise Control systems take the effort out of motorway trips and there's an optional 'Driving Assistant Plus' safety package that not only keeps you in lane but also includes an 'Evasion Aid' that helps you to deal with any hazard that might suddenly appear at speed.

As you'd expect, the twin turbocharged petrol/electric hybrid engine used in the 530e produces impressive WLTP efficiency figures, with BMW claiming a combined cycle return of up to 201.8mpg and up to 32g/km for the rear-driven 'SE' model; for the rear-driven 'M Sport' variant, it's up to 166.2mpg and up to 38g/km; and for an xDrive 'M Sport' 530e, it's up to 141.2mpg and up to 45g/km. In comparison, a 530d diesel manages up to 48.7mpg on the combined cycle and up to 151g/km of CO2. This 530e model qualifies for the low 12% company car tax band too (or 10% for a rear-driven 'SE' variant): it's 37% for a 530d. Keep the car in its 'Max eDrive' mode and a claimed all-electric driving range of up to 36 miles is supposed to be possible in a rear-driven 'SE' variant (it's around 30 miles across other 530e variants), but get the car on a motorway and you'll find that either figure is difficult to get anywhere near. The 9.2kWh battery pack under the rear seats can be charged in less than three hours. Insurance ranges between group 36 and 39 depending on variant. Adding flexibility to charging your plug-in model, BMW offers a charging device called a wall box, which can be installed at home or at work, to reduce charging time. Alternatively, you can simply plug your 740e into a domestic wall socket. BMW's ConnectedDrive app will help you find where the nearest charging points are when you are out and about. All BMW's come with a three-year unlimited mileage warranty. However, high voltage batteries get an eight-year 100,000-mile warranty. Residuals should be quite strong, the 530e likely to retain over 40% of its value after three years.

You're going to need a very specific set of circumstances to make 530e plug-in hybrid motoring work for you. Forget the incredible claimed combined consumption figure: in reality, you're probably going to be returning the same kind of regular consumption figure of around 35-40mpg that you'd manage in a comparable 530d. That diesel variant's lower weight means it would handle more sweetly. Plus it has a bigger boot. On the other hand, this 530e runs on cheaper fuel, will cost you less in BIK tax. Plus, if you've a short daily commute, there's real appeal in the thought that if you get your charging regime right, you should rarely have to ever visit a fuel station. It's a compelling thought.