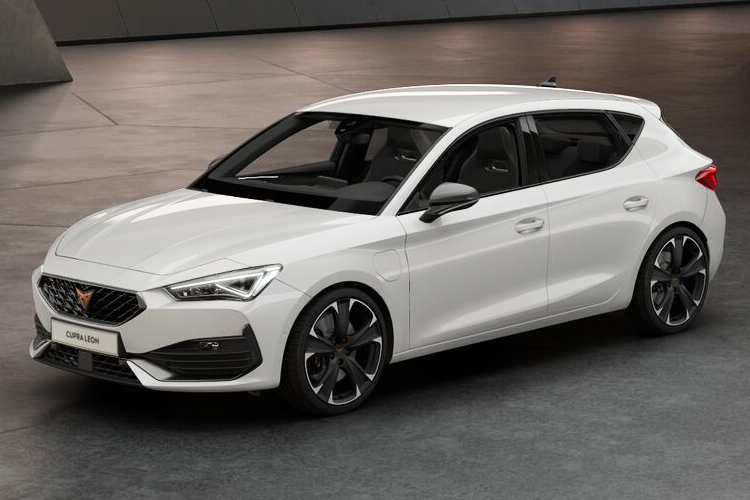 Will the CUPRA Leon be as appealing in e-Hybrid PHEV form? Jonathan Crouch drives it.

Hot hatches can these days be very socially responsible - and if you doubt that, here's one that sets out to change your mind - the CUPRA Leon e-Hybrid. The name here may not be familiar, but the engineering formula delivered may well be. Ever since 2015, Volkswagen's sporty Golf GTE has offered a 1.4-litre TSI petrol engine mated to an electric motor powered by lithium-ion battery that gives limited all-electric driving range. In more recent years, this more dynamic take on the PHEV plug-in formula has been replicated in similar products by two other VW Group brands; Skoda, who these days can offer you a plug-in version of their Octavia vRS. And CUPRA, who've brought us this CUPRA Leon e-Hybrid. The Golf and the Octavia both also offer this PHEV powerplant in 204PS form, but that's a bit of a weedy output for a car looking like this one, so this Spanish contender limits itself to the Golf GTE-style 245PS version of this powertrain. How does it fare?

This CUPRA may have a socially responsible powertrain but it still wants to be a hot hatch. Like other more conventional CUPRA Leons, this one get sports suspension lowered by 25mm at the front and 20mm at the rear. And a set of drive modes - 'Comfort', 'Sport' and 'CUPRA', the latter for those red mist moments. These set-ups determine throttle response, gearshift timings from the DSG 7-speed auto, steering feel and the level of artificial engine noise you'll want pumped into the cabin. An extra 'Individual' menu option allows you to set your own parameters if you don't like the pre-set ones. Under the bonnet, it's just as in a Golf GTE, which means a 150PS 1.4-litre TSI petrol engine is mated to a 6-speed DSG auto gearbox and an 85kW electric motor powered by a 13kWh lithium-ion battery with a WLTP-rated all-electric driving range quoted at 34 miles. Which of course you won't get anywhere near if you explore the quoted all-electric top speed of 80mph or start trying to throw the thing around too much (an extra kerb weight addition of up to 60kgs over a conventionally-engined CUPRA Leon discourages you a bit from doing that anyway). There's 400Nm of torque on tap, which facilitates a 0-62mph time of 6.7s (7.0s for the estate) en route to 140mph flat out. Sensible family motoring was never quite as fun as this.

Apart from an extra charging flap on the offside front wing, there are no significant visual changes differentiating this e-Hybrid variant from other CUPRA Leons. So, like its showroom stablemates, this car looks really gym-toned in its two offered body shapes - there's a five-door hatch and an Estate. The CUPRA logo sits boldly on the front grille, with a large front splitter and big air intakes highlighting this car's assertive look. There are side skirts that visually lower the vehicle and you get CUPRA-specific 19-inch black alloy wheels with black and silver finishing. The dark chrome front grille frame, front wings and exterior side mirrors contrast with the various model-specific body colour options. Inside, there are sporty bucket seats and a CUPRA steering wheel, which houses the engine start and driver mode selection button. You also get an interactive digital driver display to replace conventional binnacle dials. And as with other Leons, there's a large, central 10-inch infotainment touchscreen that reduces the button count. This look is further accentuated by the vehicle's compact DSG shifter. Throughout the interior, the copper and dark chrome detailing brings a sense of drama, with the dashboard and door mouldings finished in brushed dark aluminium and illuminated CUPRA tread plates in the front doors, plus there are colour coded door panels and seats. Otherwise, it's much as in any other Leon. There's comfortable room for a couple of adults in the back. As usual with a PHEV, you'll have to accept a little less boot space, which here falls from 380-litres in a normal CUPRA Leon to just 270-litres.

At the time of this test in Summer 2021, the Leon e-Hybrid hatch was priced in its most affordable 'VZ2' form from around £35,000 and in 'VZ3' 245PS guise from just under £37,000. Allow around £1,100 more for the alternative estate body style. That looks good value against rivals like Audi's A3 Sportback Sportback 40 TFSIe and the Mercedes CLA 250e. As for equipment, well base 'VZ2' models include DCC dynamic chassis control, speed-sensitive steering, 19-inch alloy wheels and (on the Estate) roof rails too. The flagship 'VZ3' model adds petrol blue Nappa leather bucket seats, a heated steering wheel and a wireless smartphone charging pad. Depending on the spec level chosen, there's plenty of autonomous driving tech and safety equipment too fitted across the range. Predictive Adaptive Cruise Control (ACC) uses feeds from GPS data delivered from the navigation system and input from the front-mounted camera and Traffic Sign Recognition, allowing it to proactively adjust the cruise speed depending on the road layout ahead. When the road becomes more congested Traffic Jam Assist takes the stress out of driving, maintaining a safe distance to the vehicle in front. There's also an 'Emergency Assist' system that can bring the Leon to a controlled stop if you're taken ill at the wheel. And a 'Blind Spot Detection' system that alerts the driver to another vehicle in their blind spot.

This CUPRA Leon e-Hybrid model boasts a WLTP-rated all-electric driving range of up to 34 miles. And there's a 'hold' feature that allows you to save battery charge for urban motoring you might have to do later in any given trip. Of course, in deciding the budgetary case for this PHEV CUPRA, you will of course need to factor in charging costs, but if you get your charging regime right on off-peak electricity that'll hopefully cost pennies rather than pounds to consume, these bills shouldn't be too great. The combined range of the petrol and electric motor is around 660 miles, making a plug-in Leon CUPRA of this sort an ideal comfortable car for the really long journeys that would probably defeat full-EV models in this class like, say, a Kia EV5, a Hyundai IONIQ 5 or a BMW i4 - or CUPRA's own Born EV. And the electrified version of this CUPRA will charge much quicker than a full-EV: powering a PHEV CUPRA Leon up from a domestic socket would take around five hours, but using a garage wallbox, you'll be able to reduce your charging time period to around three and a half hours. Bear in mind that only a single Mode 3 charging cable is included as standard. The quoted WLTP combined cycle fuel return for a CUPRA Leon e-HYBRID Hatch model is up to 217.3mpg. For the Estate e-Hybrid variant, it's up to 201.8mpg. And the CO2 reading that'll see your BiK tax payments rated at just 11% is an impressive 30g/km; that's for the Hatch version - for the Estate variant, it's 31g/km. These are pie-in-the-sky figures of course. If you don't charge your CUPRA Leon e-Hybrid much and use a little of throttle, you'll be burning plenty of fuel - and possibly getting through quite a few sets of front tyres too.

Family folk who've dismissed the idea of a hot hatch on the basis of inefficient running costs might well like what CUPRA is serving up here. Yes, you can have pretty much the same confection offered as either a Volkswagen Golf GTE or a Skoda Octavia vRS, but those two cars will be a touch too conservative for the kind of person who'll like this Leon. It's a bit sportier than the Golf or the Octavia to drive too, though obviously not quite as agile as an ordinary CUPRA Leon. The extra weight of the PHEV system has to tell somewhere. That set-up also adds plenty to the bottom line asking price. But if you can justify that, there's plenty to like here. Being able to conduct nearly all your commuting duties under battery motion, then being able to let rip on the back road home under petrol power is an enticing combination of virtues. Particularly when it's packaged up like this. In a Leon like no other.