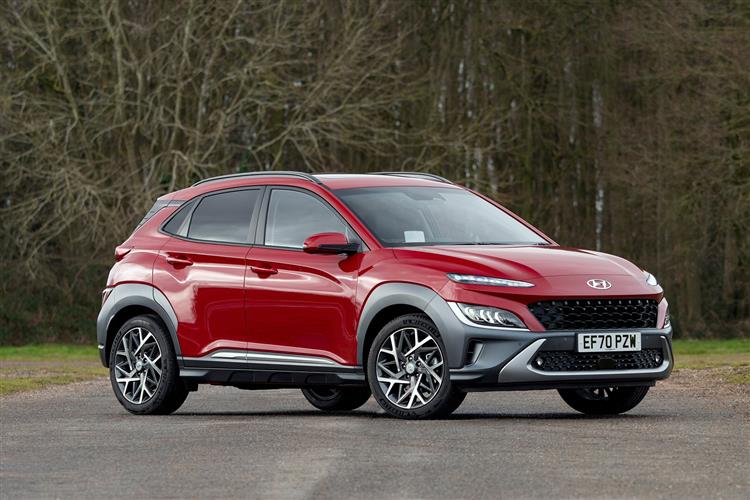 The Kona small SUV, named after the island of Hawaii's Kona district, has proved to be one of Hyundai's strongest-selling models. It was first launched in 2017 with a range of petrol and diesel engines, then a full-electric battery-powered EV version joined the range in 2018. A year later, the CRDi diesel powerplants in the line-up were replaced by the far more eco-conscious variant we're going to look at here, the Kona Hybrid, a petrol/electric derivative using much of the engineering already seen in the company's frugally-focused IONIQ model. This Kona Hybrid was then lightly facelifted in late 2020 to create the car we're going to look at in this report. We ought to clarify the terminology here. 'Hybrid' is a word bandied about quite a bit these days, but very often at present, it designates 'mild hybrid' technology, the sort of thing you get in a lesser 1.0-litre Kona - and elsewhere in this class for instance in a Ford Puma, which sees a normal combustion engine only very marginally electrified by a tiny battery positioned under the rear seat. Full-Hybrid engines are very different and, unlike mild hybrids, can switch to full-electrification in city motoring. Toyota's C-HR and Kia's Niro are the only other brands currently offering such a thing in the small SUV segment.

The Kona Hybrid takes its drivetrain from the proven IONIQ Hybrid, using a Kappa 1.6 GDi Atkinson Cycle combustion engine working with a 1.56kWh battery and a 32kW motor to deliver a maximum hybrid system power of 141PS and 265Nm to the front wheels, via a 6 speed dual clutch transmission. That torque output isn't quite as much as was generated by the diesel version being replaced here, but it's not too far off. This model's little electric motor draws its energy from a lithium-ion polymer battery, but it's only 1.56kWh in size, so definitely not of the plug-in variety. As for performance, well 62mph from rest takes 11.6s en route to a 115mph maximum. This mildly electrified Kona model takes its more sophisticated multi-link rear suspension from the top variant in the petrol Kona range, the 1.6-litre 'Premium GT' derivative. And it can offer a towing capacity of up to 1300kg. On the move, you notice a somewhat rough, coarse note to the GDI petrol engine under harsh acceleration - it's one of Hyundai's older units. But lift off and refinement reigns supreme, perfectly complementing the light but accurate 'Motor Driven Power Steering' system that makes the car so easy to precisely place on the road, whether you're in town or threading your way at speed through corners on the open road. To improve traction and damping through those bends, there's also an 'Advanced Traction Cornering Control' package. Plus there's a 'Sport' mode to sharpen throttle response and give the steering a little more weight.

It's difficult to distinguish a Kona Hybrid from a conventional petrol model, but brand loyalists will perhaps note 16 or 17-inch wheels of a design bespoke to the hybrid model and the special 'Blue Drive' badging used on the wings and tailgate. Otherwise, the exterior looks are as with any other ordinary Kona SUV, so you get the useful package of exterior updates recently applied to this facelifted model. The Kona was always quite a bold looking small SUV: well, it's even bolder now, the facelift update package adding protective cladding panels at the front, while enhanced upper daytime running lights now flank fluted inlets at the front of the bonnet. Updated alloy wheel designs feature and at the rear, the re-styled tail lights feature horizontally-stretched graphics, plus there's a smarter bumper too. As before, short rear overhangs and a low roofline add to the purposeful silhouette, plus contrasting exterior accents and standard-fit roof bars inject a bit of all-important SUV flavour. In its dimensions, this updated Kona is 40mm longer than the previous version, giving it a more sleek and dynamic look to balance out its wide, strong visual stance. Inside, the cabin gains a revised centre console and there's a higher quality feel thanks to the addition of fresh colours and materials, plus careful use of ambient lighting. An electronic handbrake switch is now standardised. The centre-dash infotainment screen is now much bigger - 10.25-inches in size - and can now be ordered optionally in AVN form with a split-screen function and multiple Bluetooth connections, plus the brand's latest suite of 'Bluelink' telematics - and there are extra voice recognition features too. Either way, the infotainment package is of course compatible with the 'Apple CarPlay' and 'Android Auto' systems. As for practicalities, well there's space for a couple of adults in the rear to sit reasonably comfortably. Plus there's a 374-litre boot that you can extend in size to 1,156-litres when the 60:40 split-folding rear backrest is flattened.

There are three Kona Hybrid trim levels - 'SE Connect', 'Premium' and 'Ultimate', with pricing pitched from around £23,500 to just under £29,000. To give you some perspective, that's around £2,700 more than you'd pay for an equivalently specified Kona with the brand's more conventional milfd hybrid 1.0 T-GDi 120PS petrol engine. You can't have that conventional 1.0-litre model with an auto gearbox though. If you could, the price difference to this Hybrid variant would obviously be much narrower. Whichever Kona Hybrid derivative you go for, equipment levels are pretty generous. Even the base 'SE Connect' variant comes with 17-inch alloy wheels, body-coloured door mirrors, LED daytime running lights, roof rails and rear spoiler with integrated LED brake light. Inside there is manual air conditioning, 60/40 split-folding rear seats, electric windows front and rear, a 10.25-inch Driver's Digital Supervision Instrument Cluster, a USB port, automatic activation for the headlights, plus an 8-inch touchscreen Display Audio with rear-view camera and Smart Device Integration with Apple CarPlay and Android Auto. All models in the Kona range are equipped with a range of enhanced safety and driving assist features for added peace of mind. For example, Leading Vehicle Departure Alert (LVDA) alerts the driver if they do not react fast enough when the vehicle ahead of them starts moving. Another is Lane Following Assist (LFA), which automatically adjusts steering to assist the driver to keep in the centre of the lane. Forward Collision-Avoidance Assist with pedestrian detection (FCA) is now standard. Rear Seat Alert (RSA) alerts the driver if someone or something is in the back seat when they go to exit the vehicle. In addition, all Kona models are now available with eCall, a feature which automatically alerts emergency services if the airbags are deployed or the e-Call button is pushed.

Let's get to the figures. In base 'SE' form, this Kona Hybrid manages 57.6mpg on the WLTP combined cycle - and 112g/km of WLTP-rated CO2. Go for the 'mid-range Premium' model with its larger 17-inch wheels and those figures fall to 56.5mpg and 114g/km. To give you some range perspective on those figures, a conventional 1.0-litre T-GDi petrol-powered mild hybrid 120PS Kona model manages 47.1mpg and 135g/km of CO2. Insurance on the Kona Hybrid is rated at group 13E - but falls to group 11E on the top 'Ultimate' model thanks to its extra camera safety kit. As for servicing, well your Kona will need a garage visit once a year or every 10,000 miles, whichever comes sooner. If you want to budget ahead for routine maintenance, there are various 'Hyundai Sense' packages that offer fixed-price servicing over two, three or five-year periods. You can pay for your plan monthly and add MoTs into the three or five year plans for an extra fee. A strong buying incentive is the five year unlimited mileage warranty that comes as standard. It's backed up by breakdown cover that last the same length of time and free annual vehicle health checks over this duration.

If you're after a small Crossover that's particularly city-orientated and you're not quite ready to take the plunge into full-EV motoring, then this Kona Hybrid might prove to be a very good pick. This variant hasn't of course garnered as many headlines as the fully battery-powered Kona Electric but in reality, right here, right now, it's probably the better pick for the majority of likely buyers. Obviously the key competitor on Hyundai's radar here is the Toyota C-HR. Well that car represents tough opposition but there's certainly plenty of room in the full-hybrid part of this class for both cars and this Kona represents a slightly better value proposition. We think it's a car the segment will like.

Absolutely fantastic services from start to finish. Alex was amazing, everytime I called for a update on my car order he let me know what was happening. All the staff at stable are very professional. What a pleasure it has been. Thank you so much.