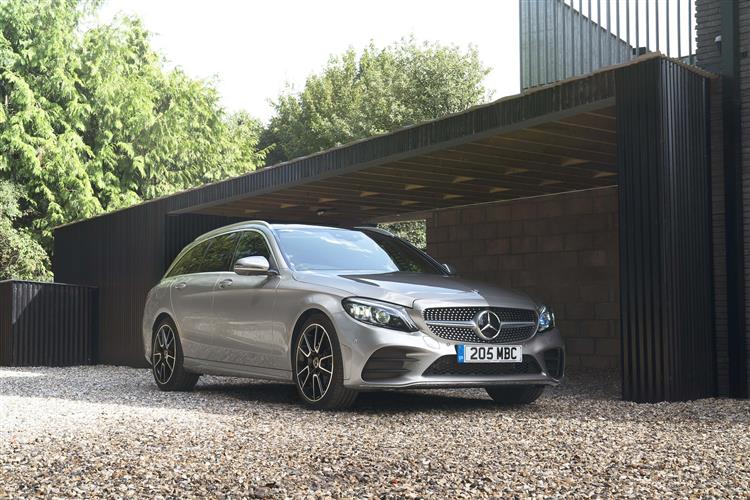 At its original launch in 2014, the fourth generation C-Class Estate boasted that it offered the largest boot of any C-Class station wagon yet made. That wasn't saying too much, the 490-litre figure being only 5-litres bigger than the previous generation model and still well inferior to apparently smaller, humbler station wagons. Still, buyers in this segment don't usually come looking for ultimate capacity. They want sophistication and class - which this improved MK4 model provides in spades.

As you'd expect, the handling of this estate variant is pretty much indistinguishable from the saloon model. The C-Class has for some time been, and will continue to be, a car with a clear focus on comfort and refinement - at least in its mainstream guises anyway. It was the first model in this class to offer the option of air suspension, though most buyers stick with the standard steel springs. As before, across the range there's a standard 'DYNAMIC SELECT' driving modes system - and you can add to that with optional 'DYNAMIC BODY CONTROL' adaptive damping. All models come as standard with 9G-Tronic automatic transmssion, which now features nine speeds and buyers certainly aren't short of engine options, with most still likely to want a diesel. There's a base 160hp 1.5-litre unit in the C200d. But most buyers opt for the 2.0-litre 194hp unit on offer in the C220d variant, which offers the option of 4MATIC 4WD. The entry-level petrol unit in the base C180 is a 1.6-litre 156hp powerplant, but ideally you'd stretch to the more modern, much perkier 184hp 1.5-litre engine installed in the C200 which features the brand's latest 'EQ Boost' technology using a 48volt on-board network with a belt-driven starter/alternator. When accelerating, 'EQ Boost' system can assist the engine with an additional 14hp, bridging the brief moment until the turbocharger has built up its full charge pressure. 4MATIC 4WD is optional. Mercedes has also developed a 2.0-litre 258hp version of this petrol engine for the C300 derivative. Beyond that lie only the Mercedes-AMG high performance derivatives. The first of these, the 3.0-litre V6 C43 4MATIC, now puts out 390hp, 23hp more than before. Beyond that lies only the V8 C63 AMG model, with a 4.0-litre V8 Biturbo engine offering either 476 or 510hp.

First the figures. The boot offers 490-litres of capacity with the seats in place and 1,510-litres all-up. Not vast then. Still, that's the same as an Audi A4 Avant, while the BMW 3 Series Touring only adds another 5-litres, so as load luggers, all three are reasonably dismal. The luggage bay measures 950mm in width and the rear seat splits 40:20:40 allowing longer items to be carried with two rear seats in use. A powered tailgate and hands-free access system are both offered as options and you can also spend more on a Cargo Package which includes adjustable rails to separate boot contents and an additional electric rear seat release button. On to the changes made to this revised model. The design of the front and rear lights is defined by clear-lined contours. On both the saloon and the estate, the bumpers have been re-styled both front and rear and the sportier 'AMG Line'-trimmed models get a sleeker front apron and rear diffuser. Inside, the alterations are more obvious, with the introduction - as an option - of the fully digital instrument display already familiar from the brand's E-Class and S-Class models, complete with touch-sensitive steering wheel buttons. This is complemented by now-larger centre console screens that can be either 7-inches or 10.25-inches in size, the latter format used for the top 'COMMAND' multi-media set-up that many customers will want.

You're looking at a £1,200 premum to get this estate over the saloon variant. Prices haven't changed too much, as before sitting mainly in the £32,000 to £47,000 bracket. There are three trim levels, 'SE', 'Sport' and 'AMG Line' before you then get into the super-serious Mercedes-AMG C43 4MATIC and C63 high performance models. As for equipment, well that's more generous than it used to be. Media connectivity will be important to likely customers, so every C-Class comes as standard with an 'Audio 20' multimedia system featuring two USB ports, an SD card reader, Bluetooth connection and media interface. Many though will want to upgrade to the 'COMAND Online' system that boasts fast 3D hard-disc navigation and access to a Concierge service that'll connect you through to help with every aspect of your journey. There's now an optional wireless charger and an 'Energizing' comfort control system that links various interior functions to create a series of relaxing themes. Plus there are now two optional audio upgrade choices - a 9-speaker 225-watt set-up and the top Burmester surround sound system. Safety-wise, 'Active Brake Assist' autonomous braking is standard. And there's an optional 'Driving Assistance' package that delivers the 'Active Distance Assist DISTRONIC' system enabling 'level 2' autonomous driving capability.

The new 1.5-litre EQ Boost petrol engine fitted to the base C200 enables a useful improvement in efficiency to be possible, so don't automatically opt for a diesel this time round. It features a clever starter/alternator that during deceleration recuperates kinetic energy and charges the battery. For auto models, there's also a gliding mode that operates at cruising speeds, switching the engine off, before seamlessly re-starting it when you brush your foot against the throttle. And a 'recuperative brake with intelligent engine stop' function which also works when the vehicle is coasting. Mercedes says that internal friction is much reduced with this new four cylinder unit. As for the new 2.0-litre diesel engine fitted to the C220d, well it performs to the latest super-stringent Euro 6d-TEMP standard and uses a particularly efficient 'step recess' combustion process - named after the shape of the combustion case in the piston. Internal friction is also reduced here - by around 25% - and the engine's more compact, leading to significant efficiency benefits. What else? Well maintenance costs will be kept down thanks to an ASSYST Plus service indicator on the dash that'll calculates precisely when a dealer visit might be needed. And residual values will be as high if not higher than anything else in the class.

Although there's a lot to like about this improved MK4 model C-Class Estate, it's still not really a car that will appeal to those with a lot of gear to carry. Seats up in normal family mode, there's a scant 10-litres more space back there than you get with the saloon. So why would you bother? The added practicality does come in handy for those odd occasions when you need to drag some Billy bookcases back from IKEA or such like, but how often will this be? Often enough in, say, three years to justify tying up another £1,200-odd over the saloon? That'll be a decision you need to make. Some may well find the estate's styling a bit more handsome than the saloon's. We've heard a few dissenting opinions regarding the four-door car's CLA-like tapered rear end and the estate is more conventionally proportioned. Still, the opportunity to offer significantly more space than its key rivals has been missed and that would have clearly and objectively differentiated this model. Overall, this C-Class looks a very good car. As an estate, however, we remain to be wholly convinced.