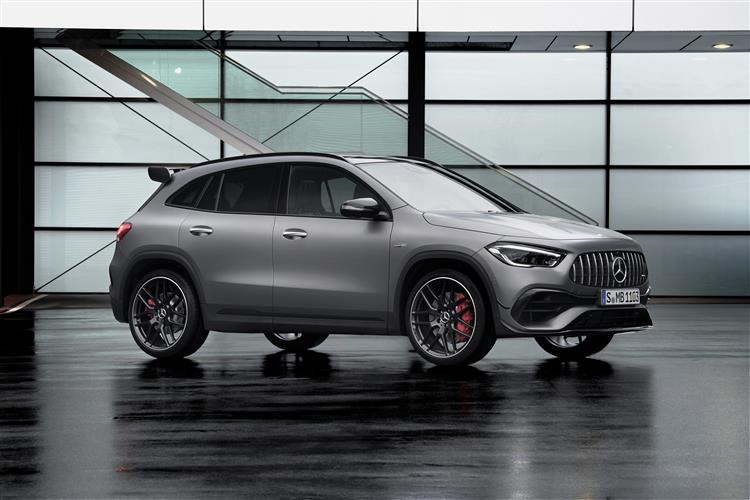 Mercedes is marking its territory at the performance end of the premium-badged compact SUV segment in no uncertain terms with the powerhouse GLA 45. Jonathan Crouch reports.

It's not like Mercedes-Benz to miss out on an opportunity - and the brand hasn't done here. We've been impressed with the second generation version of the company's GLA compact premium SUV and it didn't take the brand's Afalterbach-based AMG tuning division long to get its hands on it and produce the vehicle we have here; the GLA 45. It borrows the potent '45'-spec performance engineering also used on the brand's A and CLA-class models and this spells all-wheel drive traction and a surfeit of power that's almost obscene. Can it work in a higher-riding 'crossover' body? Audi's RS Q3 has demonstrated that a market exists. Can Mercedes trump Audi at its own game?

There's only one engine on offer but it's quite a powerplant. A 2.0-litre four-cylinder unit might not immediately promise great fireworks, but this one comprehensively trumps the 400hp 2.5-litre lump in the Audi RS Q3, developing a hefty 421hp from a relatively lightweight hand-built twin-scroll turbo engine (which is 40hp than the equivalent version of the previous generation model). That's in '45 S' version form, the only variant of this car offered in our market. Mercedes claims this car's engine to be the most powerful series-production four-cylinder turbo powerplant in the world and although you might well remember the odd Mitsubishi Evo with a few more ponies under the bonnet, for the time being at least it's impossible to argue with Mercedes' claim. This engine develops 500Nm of torque from just 2,250rpm (up from 475Nm before), again incrementally better than the RS Q3 Audi can manage. 62mph from rest takes 4.3s en route to 168mph. Drive naturally goes to all four wheels, but despite the SUV tag, don't be tempted to go green laning in this one. The ground clearance is minimal and the low-profile tyres aren't going to afford much grip on wet grass or protection to the beautifully-finished 20-inch alloy wheels. You get an AMG SPEEDSHIFT DCT 8-speed dual clutch sports transmission which has a RACE-START function and various AMG DYNAMIC SELECT driving modes enhanced by AMG DYNAMICS integrated agility control. Traction through the bends is enhanced by AMG Performance 4MATIC+ all-wheel drive with AMG TORQUE CONTROL. Plus there's bespoke AMG suspension with adaptive damping based around the three modes of AMG RIDE CONTROL. There's also a high performance braking system and circuit fiends can play with an AMG TRACK PACE app.

The styling of the GLA 45 offers a neat third way if you find the A45 AMG too gawky and the CLA 45 AMG too weird. Of the three, it's probably got the most cohesive front to rear design and it's not too overdone. There's a long bonnet with pronounced powerdomes, plus a compact greenhouse and muscular shoulders over the wheel arches that clearly reveal sports car genes. The AMG-specific radiator grille with the vertical slats identifies this GLA 45 as a member of the AMG Performance family and is flanked by piercing LED High Performance headlamps, plus there are big 20-inch wheels, flared front wings and large air intakes with silver chrome inserts in the fins. Inside, there are contoured sport seats with firm lateral support, double topstitching in red and red designo seat belts, plus AMG carbon fibre-look trim elements in the dashboard support. The chromed air vents are likewise upgraded with a red ring. Yellow trimming highlights distinguish the status of this S-Model and there's an AMG Performance steering wheel in nappa leather and DINAMICA microfibre with contrasting yellow topstitching. Otherwise, it's the standard GLA recipe, with twin front fascia screen and an advanced MBUX infotainment system. There's reasonable rear passenger space on a sliding rear bench - and a practical 435-litre boot.

Expect to pay around £59,000 for your GLA 45 S 4MATIC+ - or around £65,000 if you want the plusher GLA 45 S 4MATIC+ Plus version. Many will want to add extras - for instance, to upgrade to the larger optional 21-inch AMG Performance light-alloy wheel rims (which are standard with 'Plus' trim) and the DTM-style winged AMG Performance front seats. Still, you do at least get plenty for your not-inconsiderable outlay. Aside from everything we've so far mentioned, there are three bespoke AMG display styles ("Classic", "Sport" and "Supersport") for the instrument cluster. The "Supersport" mode is particularly striking with a central, round rev counter and additional information presented in the form of bars to the left and right of the rev counter: with a three-dimensional perspective, they reach far into the background to an artificial horizon. We also love the standard AMG exhaust system. Depending on the choice of drive program, its sound signature ranges from harmonious and discreet (in the programs Slippery, Comfort and Sport) to emotive and sporty (in Sport+ and RACE). The sound characteristics are controlled by an exhaust gas flap, depending on engine speed and load. AMG Real Performance Sound is available as an option.

The emissions figure of the GLA 45 S 4MATIC+ (215-224g/km WLTP) seems scarcely credible given that this is a 421hp crossover that hits 62 in less than five seconds. Its key rival, the Audi RS Q3 manages 202g/km, but the Audi is less powerful and anyway, you can justify this Merc's return by telling yourself that it's really not that much worse than something like, say, a lightweight Toyota GT86 sports coupe; a car with no all-wheel drive, no usable rear seats, no turbocharger and which develops less than half the torque of the GLA 45 AMG. That's quite jaw-slackening. The WLTP combined cycle fuel return of the GLA 45 S 4MATIC+ is rated at 28.8-29.7mpg. Mercedes is quite upfront about how it's making those numbers. The combination of multiple fuel injection and multiple spark ignition improves fuel economy and significantly increases the thermodynamic efficiency, leading to low exhaust emissions. The injection system's outstanding flexibility also ensures a high degree of freedom in terms of application. There are up to five injections per combustion cycle in the cold-start and warm-up phase, which is so crucial for emissions. Residual values are bound to be sturdy, as the A and CLA-Class cars have already proved. The promise of a hot Mercedes crossover with low running costs and high build values isn't going to be lost on used buyers.

Mercedes has a product range bursting with talent at the moment, yet the GLA 45 S still catches the eye. Yes, around £50,000 is quite a lot to pay for a vehicle that doesn't really offer that much everyday practicality over a family hatch, but when you factor in the incredible power and performance of this car, it doesn't at first seem an unreasonable ask. Or does it? Think a little more about the GLA 45 AMG and you come away wondering not how it measures up against an Audi RS Q3, but whether it really offers anything much more over, say, a far more affordable 306hp GLA 35 AMG 4MATIC model, other than being slightly quicker to 62mph. It's easy to be wowed by the numbers here - and they are quite some numbers - but let's look at the salient facts. This is a road car. It rides a little higher than most, albeit not by much, but the ride height is just something to lever this car into a different niche. It adds nothing to its dynamic capabilities. If you're not sold on the styling of the A45 AMG and would like something that little bit different, we can see the point of the GLA 45 AMG and Audi has proven that a market exists for testosterone-packed crossovers. Despite all that though, we can't help suspecting that maybe, just maybe, this hot GLA could be a little too niche for its own good.