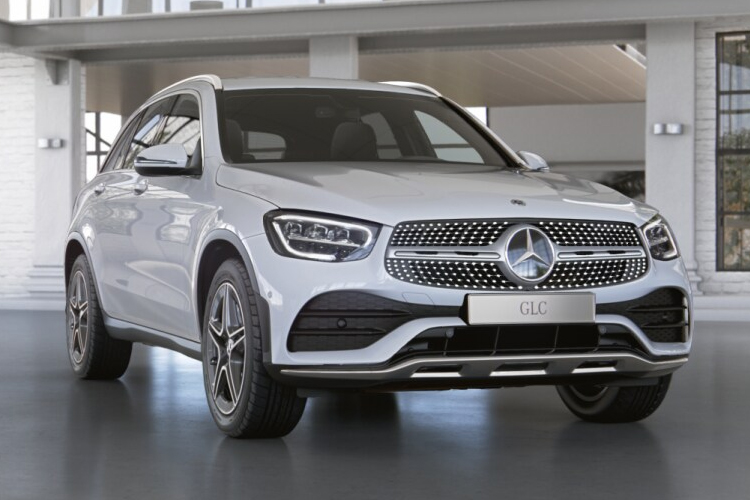 The GLC brings a bit of Mercedes polish to the premium part of the mid-sized SUV segment. Jonathan Crouch drives the 220d version.

The GLC shares plenty with the C-Class models that roll down the same German production line in Bremen. Which is why this SUV benefits from much the same kind of update package that was visited upon the fourth generation version of that car in 2018. So there's a smarter LED headlamp and grille combo and inside, infotainment updated with the latest MBUX media system. Semi-autonomous driving tech makes an appearance, there's now the option of a fully-digitalised instrument cluster and, as before, buyers get the chance to add sophisticated air suspension. More important than all of that though, is that the volume 220d diesel variant that almost all GLC buyers choose gets a completely fresh 2.0-litre OM654-series engine that offers vast improvements in refinement, efficiency and technology. In short, the GLC is now much better equipped to take on key direct rivals launched since this design's original introduction, cars like the third generation BMW X3, the second generation Volvo XC60 and Alfa Romeo's Stelvio, as well as improved versions of established rivals like the Audi Q5 and the Jaguar F-PACE. Sounds promising. Time to check this Mercedes out.

The GLC has been rejuvenated beneath the bonnet, the key update being the introduction of the 2.0-litre 'OM654'-series diesel unit we're trying here in the GLC 220d variant that most buyers of this car in our market choose. This engine is far more refined than the rumbly 2.1-unit it replaces - and is mated to a package that as in all GLCs, includes 4MATIC on-demand 4WD and a 9G-TRONIC PLUS 9-speed auto gearbox, which works with the usual 'DYNAMIC SELECT' driving modes that alter drive response, steering feel and ESP settings. This four cylinder diesel powerplant is probably the most refined unit of its kind that we've come across and always feels impressively smooth and free from vibration, a vital consideration when you're looking for a car that will ease you along with the minimum of fuss. Even under firm acceleration, this engine remains calm, unruffled - and reasonably rapid too. There's a lusty 400Nm of torque, which helps propel the car to 62mph in 7.9 seconds on the way to a top speed that's rated at 134mph. Buyers won't care much about off road prowess, though it's worth pointing out that unlike some class rivals, the GLC actually has some. The 4MATIC 4WD system the car uses is like virtually all AWD systems in this segment in that it only engages the rear wheels when a lack of traction calls for it.

Subtle changes mark the revised version of this first generation GLC apart from the original. The fact that it's also available in a separate Coupe body style relieves this standard SUV variant of the need to look too self-consciously sporty, but there's still just enough visual dynamism here to interest someone who might also be considering, say, an Evoque, an F-PACE or an Alfa Stelvio in this segment. The GLC's cabin was always a showroom selling point and with this revised model, thoughtful changes have further enhanced it. A smarter three-spoke steering wheel incorporates little touchpads, the left hand one of which can operate the now much larger 10.25-inch touchscreen positioned on top of the dash. This much more sophisticated media set-up incorporates the Stuttgart brand's new-generation 'MBUX' ('Mercedes-Benz User eXperience') multimedia platform with its clever 'Hey Mercedes' voice-activated functionality. Base models stay with old-tech analogue dials surrounding a central 5.5-inch display, but upper-spec GLC versions now feature configurable virtual gauges on a 12.3-inch TFT screen. In the rear, there's certainly more room for legs and knees back here than you'd get in a C-Class, though that's not enough to make this car feel any more spacious than its direct Audi Q5 and BMW X3 segment rivals. Like those cars, this one has a 550-litre boot.

The GLC SUV sits primarily in the £40,000 to £55,000 bracket; that's for mainstream versions of this conventional model, which in 220d form kicks off in base 'Sport' guise, then graduates through 'AMG Line' and 'AMG Line Premium' variants. If you don't mind forgoing base 'Sport' trim, your dealer will also offer you the alternative of a swept-back 'Coupe' version of this model, available at an extra cost over this standard design that's just below the £3,000 mark. It isn't co-incidental that the budget Mercedes requires for the 220d derivative is almost exactly the same as you'd need for its two closest Teutonic competitors, Audi's Q5 40 TDI quattro and the BMW X3 xDrive20d. In all three cases, the ownership stats are very similar, so the final decision will really come down to personal preference. Even base-spec 'Sport' variants get plenty of kit; 18-inch wheels, full-LED High Performance headlights and power-folding mirrors, plus an 'Active Parking Assist with PARKTRONIC' system to automatically steer you into tight spaces. Inside, there's a 10.25-inch touchscreen, your access point for a vastly better MBUX ('Mercedes-Benz User eXperience') multimedia set-up. It features "Hey Mercedes" voice control, a neat touchpad, a DAB tuner, lots of lovely informational graphics and Bluetooth (though not 'Apple CarPlay'/'AndroidAuto').

Those this GLC is a little heavier than its direct rivals, you shouldn't be disappointed with the efficiency stats it can deliver in 220d form. A 194hp GLC SUV 220d variant manages up to 47.9mpg on the WLTP combined cycle and up to 156g/km of WLTP-rated CO2. For company car tax, that equates to a Benefit-in-Kind taxation rate of 31%. These figures are very similar to those you'd get from a competing BMW X3 xDrive20d (which manages 45.6mpg and 133g/km); but significantly better than an Audi Q5 40 TDI quattro (rated at 39.2mpg and 144g/km). You might be interestred to know that the JLR contenders in this class, equivalent versions of the Range Rover Evoque, the Land Rover Discovery Sport and the Jaguar F-PACE, are even further away from this GLC's efficiency standard. What else? Well insurance is rated at groups 31 to 32. And you get a comprehensive three year warranty that has no mileage restriction (rival BMW and Audi warranties restrict you to 60,000 miles). And this package is built upon by Mercedes' Mobilo scheme which delivers breakdown cover for up to thirty years, as long as you continue to have your car serviced at a Mercedes main dealer. And it's worth knowing that your maintenance outlay can be kept a little in check by going for the optional Service Care package that takes care of routine maintenance, spreading the cost of regular servicing.

Image is everything when it comes to premium mid-sized SUVs and on that basis, this improved GLC is a very desirable package. In terms of styling, technology and efficiency, it borrows hugely from other Mercedes models - to very good effect. The achilees heel of the original version of this car (it's rumbly old 2.1-litre diesel engine) has been impressively dispatched. The replacement 2.0-litre unit is now difficult to better if you're looking for a refined black pump-fuelled option in this class. Of course, this car's two closest arch-rivals, the BMW X3 and the Audi Q5 have strong followings. And beyond those cars, there are trendier-looking options - a Range Rover Evoque or an Alfa Romeo Stelvio for instance. Others may want the seven-seat capacity of a comparable Land Rover Discovery Sport. As an all-rounder though, combining many of the qualities you'll find in all of those cars, the GLC remains a tempting package. A segment benchmark? You'd have to say so.