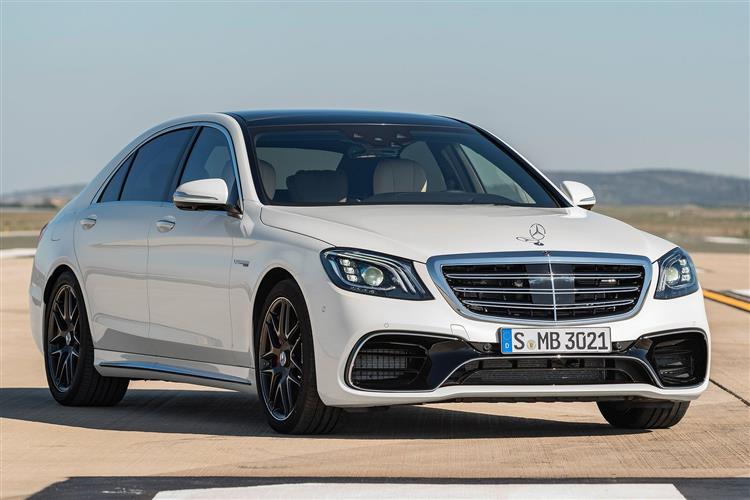 The Mercedes-AMG S 63 is still the go-to choice if you want a big saloon that doesn't hang around. Jonathan Crouch reports on the latest version.

There's something deliciously wanton about a true hero-power limousine. Whether it's the image of stealthy speed or the notion of money being no object and time being a more precious commodity, cars like the Mercedes-AMG S 63 play to an audience that most of us find utterly unknowable. Still, even if not all of us can afford the £130,000-odd admission fee to this decidedly exclusive club, sometimes it's just fun to press our noses to the glass. Perhaps the most impressive aspect of this latest S63 AMG isn't the power, the quality or the luxury gadgetry. It's the almost obsessive quest to make a car of this type - which by its very nature is one of excess and extremes - as efficient as possible. Does that matter to the target audience? Insofar as it's an indicator that they're buying some of the world's best automotive engineering, it just might.

The utterly magnificent E63 AMG gave us a clue what to expect with the big brother and also what we're missing. Mercedes is bringing to the UK an S63 AMG with drive being directed to the rear wheels: left hand drive markets get the same car with 4MATIC+ AWD, but there are no plans to offer that set-up on this model here. S 63 buyers get the same 612PS 4.0-litre Biturbo V8 found beneath the bonnet of the 'S' Model version of the Mercedes-AMG E 63. More numbers? You get 900Nm of torque, which is some 50Nm more than the E 63. Hierarchies need to be observed, you see. This will catapult the 2,070kg S63 to 62mph from rest in a mere 3.5 seconds and it keeps going until 155mph appears on the speedometer not so very long later, at which point a soft electronic speed limiter intervenes. Fitted as standard is the AMG SPEEDSHIFT MCT 9speed sports transmission, replacing the previous 7-speed unit. It's influenced by your selection between the four provided 'AMG DYNAMIC SELECT' driving modes - 'Comfort', 'Sport', 'Sport+' and 'Individual'. Each setting modifies key parameters, such as the response of engine, transmission, suspension, steering and the ESP stability control. Independently of the 'DYNAMIC SELECT' driving modes, the driver has the option of pressing an 'M' button to switch directly to manual mode, in which gearshifts are executed exclusively using the paddle shifters on the steering wheel. If required, the suspension settings can be specially selected as well. The 3-stage ESP system and the exhaust flap can also be switched with a special AMG button. There's also a 'Race Start' function for Grand Prix getaways.

Mercedes has adopted quite a subtle approach to the styling of this latest S 63, this improved model identifiable by its new 'Multibeam LED' headlamps and its redesigned front apron. The three-dimensional front splitter reduces lift at the front axle. Big 19-inch forged light-alloy wheels feature and at the back, there's an updated rear apron with diffuser insert and a set of redesigned model-specific dual tailpipes for the AMG sport exhaust system. Other changes are the same as those recently imparted to humbler S-Class models. So the prominent chromed front grille has been updated, as have the graphics of the LED headlamps and tail lights. Inside, the cabin materials are of an even higher grade than before, but otherwise, the spacious interior will be familiar to previous buyers of this sixth generation design. The AMG power Nappa leather sports seats with memory function and seat heating offer the driver and front passenger more lateral support. Special touches include an embossed emblem on the armrest of the front centre console, an analogue clock in an exclusive design and a three-spoke Performance steering wheel featuring paddle shifters and trimmed in black nappa leather and 'Dinamica' microfibre. The 31.2-centimetre TFT wide-screen instrument binnacle display reproduces round dials that provide information about engine speed, vehicle speed and lots of additional data. There's also a special AMG menu that can show engine and transmission oil temperature, lateral and longitudinal acceleration, engine output and torque, boost pressure, tyre temperatures and pressures as well as the current vehicle set-up.

Mercedes offers two versions of this car. The one we're focusing on here is the 4.0 V8 S 63, but those for whom too much is never enough may also want to look at the 6.0-litre V12 S 65 model, which boasts 630bhp. That's a car you could easily spend over £190,000 on. The S 63 requires a slightly more justifiable £125,000 to £130,000 budget and comes with the choice of short or long wheelbase variants. Rival super-powerful full-Luxury boardroom segment saloons in the £120,000-£130,000 bracket are actually few and far between. BMW has long been curiously reticent to offer a seriously sporty 7 Series and the Audi S8 is around £30,000 cheaper. Go £30,000 the other way and you butt into the Bentley Flying Spur. Maserati's Quattroporte isn't really the same kettle of kippers and neither are Aston Martin's four-door Rapide or Porsche's might Panamera Turbo. It's hard to believe, but the Mercedes-AMG S 63 4MATIC+ could be said to have wriggled into a class of one. Equipment? Well a key draw this time round will be the improved 'Intelligent Drive' driving assistance technology on offer which takes another step towards fully autonomous driving. DISTRONIC Active Proximity Control and Active Steer Assist now provide even more comfortable support for the driver to keep a safe distance and steer. The speed is now adjusted automatically ahead of curves or junctions.

Obviously, the switch from 5.5-litre to 4.0-litre V8 power pays off here. Combined fuel consumption for the S 63 improves from around 27mpg to 31.4mpg. The CO2 reading also improves - from 23g/km to 203g/km, though that still won't be enough to get you any Christmas cards from Greenpeace. Overall cost of ownership is a tough one to pin down on this car until we get hold of some more concrete numbers, especially those concerning residual value which tends to be the big ticket item with a model of this type and the one bill that almost all prospective owners will sit up and pay attention to. There are counter arguments as to how this vehicle will hold up in that regard. The first is that it's a big petrol Mercedes and these tend to be hit hard, unless they're limited run coupe editions. Have a look at what you can buy earlier S55 AMGs for in the classifieds and ask yourself whether this car will really suffer a dramatically different fate. Of course, the flipside of this is that this is the most desirable S-Class of the current crop, which should plump up demand for the short term at least.

The Mercedes-AMG S 63 is a car with no significant Achilles heel. It's a vehicle that has become acutely attuned to the needs of its target market who want a rapid yet discreet car that can entertain when required and ride like a standard long-wheelbase limousine the rest of the time. This duality of personality is something that took AMG a long while to master, yet the fine tuning of this ride and handling compromise is something that the Affalterbach company has excelled at in recent years. Where this car differs from its key rivals is that it is a mature theme. It doesn't need to try too hard and that becomes enormously seductive. There's a confidence imbued throughout the S 63 that's notably absent from some rivals. Never mind the big numbers. Mercedes has moved beyond that and is working at a more rarefied level in the automotive hierarchy of special needs.