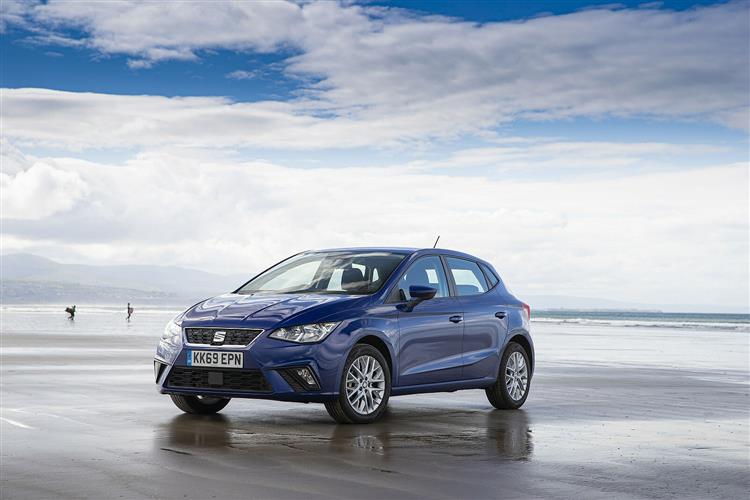 'Enjoyneering'. It's one of those marketing words of course, but it's also a rather apt description of what Spanish maker SEAT sets out to create when it brings us a small car. Something beautifully engineered: but with a bit of extra Latin sparkle. Something like this, the Iberian brand's much improved fifth generation Ibiza supermini? Perhaps. The 'beautifully engineered' bit isn't difficult to believe. The 'Sociedad Espanola de Automoviles de Turismo' - or 'SEAT' as we better know it - is well used to injecting a little life into the mainstream market. In this case, the Spanish maker's position within the Volkswagen Group means that this car is the first of the conglomerate's supermini models to get the empire's sophisticated MQB platform, something that enables weight savings and the addition of extra electronic features borrowed from larger models. Plus SEAT reckons buyers will really notice the extra personalisation options, the smarter interior and the additional media connectivity incorporated this time round. Will it all be enough to keep this car current against more recent rivals? Let's find out.

SEAT has had a good look at the engine range. It's nearly all petrol-powered, things kicking off with the old 80PS 1.0 MPI unit at the foot of the range. Try your hardest to ignore this aging unit and graduate instead to the far-preferrable (and more economic) 1.0-litre TSI three-cylinder turbo powerplant which produces either 95 or 115PS. The feebler MPI engine gets a five-speed manual gearbox, with a six-speeder used further up the range, where there's also the option of 7-speed DSG auto transmission on the 1.0 TSI 115PS FR model. The diesel alternative is a 1.6-litre TDI unit with 95PS. As for on the road driving dynamics, well SEAT says these have been improved thanks to the adoption of a hi-tech MQB platform that is 30% stiffer. As before, there's an optional 'SEAT Drive Profile' system that offers adaptive damping with two modes - comfort or sports-oriented. The Comfort/Sport selector switch also influences the feeling of the power steering and it'll alter the shift times of the DSG gearbox where automatic transmission has been specified.

The MK5 model version of this SEAT isn't available in three-door form any more, but the Spanish maker says it retains plenty of sporty style potential customers tend to want. From a styling perspective, it's clearly an Ibiza, but one that has undergone a process of evolution, with a so-called 'x-shaped' design that looks more dynamic than before. The front and rear overhangs are very short and at the front of the car, triangular full-LED headlights dominate. The longer wheelbase and window graphics accentuate the size of this model too. Under the skin, the car is based on the Volkswagen Group's MQB platform, which will also be used in next-generation versions of Volkswagen's Polo and Skoda's Fabia. The Ibiza is also bigger this time round, 87mm wider than before, while the 2,564mm distance between the axles represents a 95mm increase. As a result, legroom in the back seats has increased by 35mm, while headroom has increased by 17mm in the back and 24mm in the front. The seats are 42mm wider and the boot area is 63-litres bigger, bringing total capacity up to a class-leading 355-litre figure. The loading height has also been lowered. Other things you'll notice inside include the fact that the controls and instruments are now more driver-orientated and the cabin feels of higher quality, thanks to colour-personalisable LED lighting, an 8-inch centre-dash touchscreen and a 'Full Link' connectivity system.

Prices haven't changed very much, so expect a price span in the £16,000 to £22,000 bracket, which means that, as before, you're getting Volkswagen Polo technology for a significant saving. Only five-door models are on offer and the trim lines run from 'SE' to 'SE Technology', 'FR', 'FR Sport', 'XCELLENCE' and 'XCELLENCE Lux'. As for equipment, well the full-LED headlights are a highlight. Plus most models get 'Apple CarPlay' and 'Android Auto'/'MirrorLink' 'phone connectivity, plus buyers can specify a premium 8-inch touchscreen and a wireless charger with a GSM amplifier. In addition, there's the chance to add in a thumping 300-watt 'Beats' Audio system with 7 speakers and an 8-channel amplifier. Other features buyers might want include keyless entry with a 'heartbeat' engine start button, front and rear parking sensors and a higher quality rear view camera. 'FR' and 'XCELLENCE' variants get colour-personalisable LED interior lighting too. Safety-wise, there's 'Front Assist' autonomous braking, Adaptive Cruise Control and a 'Traffic Jam Assist' feature that can take over the driving from you at very low traffic jam speed.

Being able to dip into the Volkswagen Group parts bin for the niftiest tech usually means a very low overall cost of ownership and that's certainly the case here. The base 1.0 MPI variant manages up to 52.3mpg on the combined WLTP cycle and 108g/km of NEDC-rated CO2. The 1.0-litre TSI 95PS petrol models are capable of up to 51.4mpg (combined WLTP) and an NEDC CO2 figure of as little as 104g/km - so who needs a diesel? If you do, the 1.6 TDI model figures are up to 57.6mpg and 103g/km. The 1.0 TSI 115PS auto petrol model manages up to 45.6mpg and up to 111g/km. A start/stop system, which switches off the engine when the vehicle is at a standstill, is available on all models. What else? Well there's SEAT's usual three year/60,000 mile warranty. That's unexceptional when rivals like Toyota and Hyundai offer five years of cover as standard and Kia offers up to seven years. However, the SEAT deal is extendable, so you might be able to negotiate on that. And it includes two years of Europe-wide roadside assistance.

Ibiza's important to Spain - and this one certainly is to SEAT. Over 5.4 million examples of this car have been sold since the original first generation model's introduction back in 1984. If SEAT can promote this fifth generation car properly, then it stands a chance of gaining a place somewhere near the top of the rather over-stuffed shortlists that most browsing supermini buyers will be working through. An inherent product rightness certainly counts in this Ibiza's favour, borne from a real attention to detail that's come through development of this model line over a quarter of a century. In summary, we're looking here at a car that, like its brand, has matured nicely. One mindful of the fact that modernday Spaniards need to balance Latin spirit with sober sense. In this Ibiza, they've a small car that does exactly that.