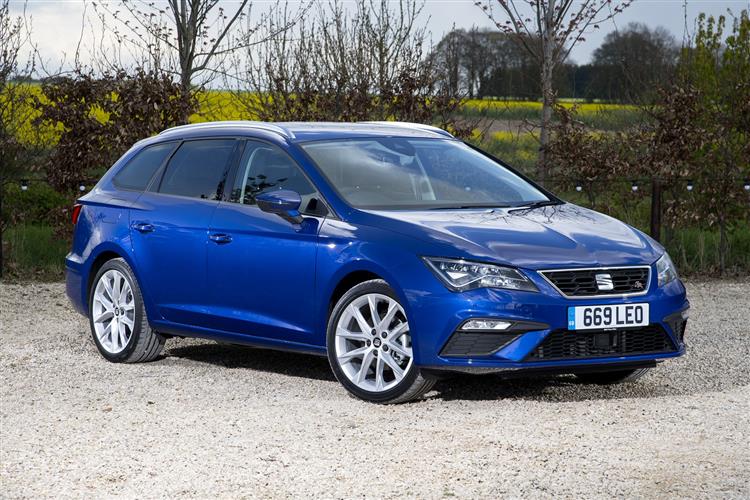 SEAT's now much improved third generation Leon is also offered as an ST estate. It might be the best car you'd never heard of. Jonathan Crouch reports.

So to this improved SEAT Leon ST. a compact estate that isn't that compact. A sensible stationwagon that claims to be sporty. A car of contradictions then, but one that promises to be quite appealing family transport, especially in the revised form we look at here with its slicker looks, stronger safety and improved media connectivity. Practical and sporty, it aims to offer a more dynamic option to compact estate buyers, with a 'lifestyle' appeal that might even pique the interest of folk looking at Qashqai-class crossovers. That's what SEAT says anyway. Time to look at this car in a little more detail.

You might not be surprised to learn that this Leon ST offers a very similar driving experience to that of its hatchback stablemates - which wasn't guaranteed given the fact that this variant must carry along 270mm of extra length behind its rear axle. In the event, it's not something you notice at the wheel, where the driving dynamics are every bit as good as they are across the rest of the Leon line-up. Under the bonnet, things are much as before, though there has been a change at the foot of the petrol range where a 1.0-litre TSI three cylinder 115PS unit slots in above the existing 1.2-litre TSI 110PS four cylinder powerplant. Other petrol engine options include a 1.4-litre TSI unit with 125PS and a clever 1.4 EcoTSI variant with efficient Cylinder-on-Demand technology and 150PS. As before, Cupra versions get the 2.0 TSI petrol engine from the Golf GTI, but in an uprated form developing up to 300PS. Most Leon ST buyers though, will want a diesel. Here again at the foot of the range there's a fresh option, a 115PS version of the VW Group's familiar 1.6-litre TDI unit. Above that sit the usual 2.0-litre TDI units, offered with either 150 or 184PS. When it comes to gearboxes, the range includes five- or six-speed manual options, all well as double-clutch DSG auto 'boxes with six- or seven-speeds.

Thanks to this Leon ST, nobody, SEAT says, now needs to have to compromise in their choice between a sporty car and a practical one. That may be over-stating things a bit but it's true that this is one of the more dynamic shapes in the compact estate segment. To create it, the Spanish designers have had to compromise a little on ultimate carriage capacity: without the smartly angled rear screen for example, you could certainly fit a bit more in, but then the car would look a little more boxy and boring. We're guessing that most potential family buyers would rather sacrifice a few cubic inches for a more assured driveway statement. Visual tweaks made to this improved version include revised bumpers and bodywork with sharper, more assertive lines, plus there's a smarter chromed front grille. Inside, the ambient lighting LEDs' intensity can be regulated as the driver wishes from the newly redesigned eight-inch central infotainment screen. This monitor eliminates the need for many of the buttons and dials that were scattered around the fascia on the previous model. From this monitor, the LED ambient lighting of the cabin can be dimmed or intensified, giving the interior a classy feel. Otherwise, things are much as they were before. Raise the sloping tailgate and you'll find a 587-litre boot that's a usefully square shape and fully 55% bigger than that of the hatchback model, Once the 60/40-split backrest has fallen flat, carriage capacity rises to 1,470-litres.

The ST estate is priced from around the £19,500 mark, so you're looking at a premium of around £1,000 above the five-door model. Customers get a choice of five trim levels - 'S', 'SE Dynamic Technology', 'SE Technology', 'FR Technology' and 'XCELLENCE Technology'. Beyond that lie the hot hatch Cupra models. There are key changes across the range with regard to media connectivity, this revised Leon featuring the latest generation of the brand's 'Easy Connect' infotainment systems, activated by this model's new 'Media System Plus' eight-inch screen. Customers can also specify a 'Connectivity Box' in the central console that enables wireless smartphone charging. And there's the brand's 'Full Link' system, which enables you to use apps from your smartphone on the fascia screen via either the 'Apple CarPlay' or 'Android Auto' media systems. This improved Leon also features many more options when it comes to electronic safety systems. Examples of this include 'Traffic Jam Assist', which virtually drives the car for you in stop/start traffic. And a 'Pedestrian Protection System' which scans the road ahead not only for other vehicles that might pose accident hazards but also people too.

It's not easy to cut back the weight of a modern family estate in a market where buyers want their cars to be safer and more heavily equipped. Yet thanks to the installation of the Volkswagen Group's MQB platform, this SEAT manages to be singularly impressive in its lack of bulk. An entry-level 1.2 TSI Leon ST is the lightest car in its class, weighing just 1,254kgs: to put that into perspective, we're talking 60kgs less than a comparable Ford Focus Estate. On the engine front, the big news with this improved MK3 model Leon ST is the installation of a three cylinder 1.0-litre TSI 115PS unit near the foot of the range. Here, you can expect over 60mpg on the combined cycle and not much more than 100g/km of CO2. The diesel options are also impressively frugal - expect around 75mpg on the combined cycle from the 1.6-litre TDI unit for example. Even the 2.0-litre TDI 150PS unit might surprise you, it being capable of over 65mpg and around 110g/km. All the powerplants get a Start/Stop system that cuts the engine when you don't need it, stuck in traffic or waiting at the lights. Plus an Energy Recovery system that stores brake energy usually lost as heat and uses it to help power the car's electrical systems, ultimately preserving fuel.

Once upon a time, not so very long ago, estate cars were purely for estate people - those with dogs, photocopiers to cart about and weekend leisure equipment. You wouldn't really consider one if you didn't actually need to. But station wagons like this improved Leon ST are rather different. Why wouldn't you choose one of these rather than a standard Leon five-door hatch? After all, the ST variant isn't much more expensive, looks just as good, drives just as well and offers a lot more everyday flexibility Like the best of its family hatchback-based competitors, it's also successful in offering nearly all the practicality in a larger estate car with the easy parking and deft manoeuvrability of a much smaller one. Is there really any point in considering a five-seater compact Scenic-shaped People Carrier when a car like this SEAT can be so versatile? Your call.

Needed a car for a quick delivery and Ray Hughes pulled out all the stops to find the right car. Would highly recommend Ray.

Brilliant service and a pleasure to deal with. Would highly recommend

Ref - lee aldis frm start to finish frm ordering my vehicle Lee was very helpful kept me informed at all times this is why i came back to stable the 2nd time and dealt with Lee. Will be recommending stable to friends for best service.