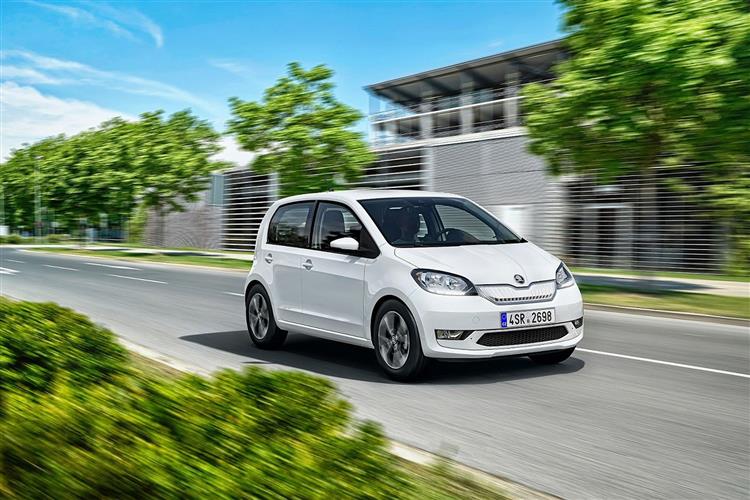 Skoda, like most of its mainstream rivals, is fully into electrification these days. The company's first electrified car (the Superb iV plug-in) was swiftly followed by a plug-in version of the new Octavia. And now, here, we've got the Czech maker's first Zero Emissions model, the CITIGOe iV. In case you're wondering, 'iV' stands for 'innovative Vehicle'. Like all Skodas, it's based on a Volkswagen, in this case the eUp! And, like all Skodas, it offers all the benefits of its Wolfsburg donor car in a more affordable package. One with all the attributes of the Citigo design, now no longer offered with any sort of fossil fuel power: that's a sign of the times.

So. What's it like, this small little electric Skoda? Quicker than you'd expect a tiny runabout to be, that's for sure. That's due to a 61kW electric powerplant with 212Nm of torque, which hurls you away from rest in a manner you'll need to adjust to if your previous experience of Citigo motoring was with a 1.0-litre petrol engine. You'll get used to driving with one eye on the Charge Indicator, a dial to the left of the main speedometer in the instrument cluster. This shows when energy is being recuperated to charge the battery (in its lower blue zone) and when you're driving efficiently (when the needle is in the mid green zone). The battery level indicator is to the right of the speedometer, where the fuel gauge would normally be. Skoda talks of a WLTP driving range when fully charged up of between 140-170 miles. You'll need to adapt to your own charging regime with this car ,which is made easier by a special version of the 'Skoda Connect' app. This allows you to remotely set charging times and to pre-heat or -pre-cool the car before departure, so that you don't use valuable energy with the ventilation system getting to a comfortable cabin temperature once you move off.

The design of this CITIGOe iV is basically the same as the previous petrol-powered Citigo model, but Skoda has fiddled with it a bit as part of this car's switch to battery power. There's only now a 5-door body shape available. A freshly designed front bumper with an integrated spoiler. And the side view mirror caps now have integrated indicators - which look smart but will make the mirrors more expensive to replace if you ever bash them. At the rear, in place of the previous round Skoda brand badge on the tailgate, the company name is displayed in spaced-out letters. There are distinctive 'C'-shaped rear lamp clusters. And the plusher 'SE L' version gets 'Scorpius' 16-inch alloy wheels. As before, the front doors open widely to an 80-degree angle, your access point to a tardis-like interior just as big as that of Skoda's far pricier and apparently much bigger Fabia supermini. Something you especially appreciate on the back seat where there's comfortable room for two adults provided the journey isn't too long. There'd be space for my three children if three belts were provided here. Unfortunately, there are only two, which is a little annoying. No complaints about luggage space though. Though there's a high sill over which you've to lump your stuff, once you get it in, there's a 251-litre capacity that's way better than what you get in a rival MINI Electric.

There are two CITIGEe iV models; once you deduct the £3,500 government grant that still applies to all-electric zero emission cars, you'll find the base 'SE' variant priced at around £17,000 and the top 'SE L' version costing just under £19,500. The 'SE' comes with the basics, but these do include climate controlled air conditioning, a leather multi-function steering wheel and a reasonable quality 'Swing' DAB radio accessible via a 6.5-inch centre-dash touchscreen. Annoyingly, you have to pay extra with base trim for the Mode 3 cable you'll need to attach this car to a garage wallbox. Or the Mode 4 cable you'll need to access a public rapid DC+ charging station. You'll be rather better served by the plusher 'SE L', which has 16-inch 'Scorpius' alloy wheels, body coloured finishing for the mirrors and door handles, powered mirrors, ambient lighting and auto headlamps and wipers. If you want to go further, you can add front fog lamps, rear privacy glass, cruise control, a heated windscreen and heated front seats. Standard safety kit across the range include 'Lane Assist' to keep you in lane on the highway. And ISOFIX childseat fastenings. You'll also want to download the 'Skoda Connect' app which allows remote access to your car. Plus there's a 'Move&Fun' app that enables you to listen to your playlists, control the radio and access your contacts.

Skoda quotes a WLTP driving range when fully charged up of between 140-170 miles. As with all EVs, the range capability is aided by proactive Brake Energy Regeneration. When the accelerator is released, the electric motor's braking function slows down the vehicle and simultaneously recuperates brake energy. Electricity recovered by regenerative braking is stored in the traction battery and is used to drive the vehicle. There's also a Skoda's 'Move&Fun' app which has a 'DriveGreen' feature that helps you drive more efficiently and cut your fuel costs. As for charging the 32.2kW lithium-ion battery, well that'll take 12 hours, 43 minutes from a normal household 3-pin plug (to 80% of battery capacity) with the standard Mode 2 2.3 kW cable, so you'll want to install a wallbox in your garage so you can use the Mode 3 7.2kW cable (which costs extra with base 'SE' trim), whereupon the charging time (to 80%) reduces to a far more acceptable 4 hours 15 minutes. If you can find a public rapid DC+ charging station cable of taking a Mode 4 40kW cable (also optional with base 'SE' trim), you'll be able to charge your CITIGOe iV to 80% in just an hour.

Some citycars sell on cute and cuddly virtues. This isn't one of them. Here instead, the urban runabout has grown up, become mature and got itself properly sorted with full-electric power. If that puts off the twentysomethings who'd prefer something more fashionable, then Skoda won't mind. This, according to Skoda, is 'engineering excellence with a human touch' - a design someone's clearly thought very carefully about. True, there are trendier electric citycars you could consider: maybe more charismatic ones too. But none that better deliver on the promise of two words that sum up this CITIGOe iV. Simply clever.