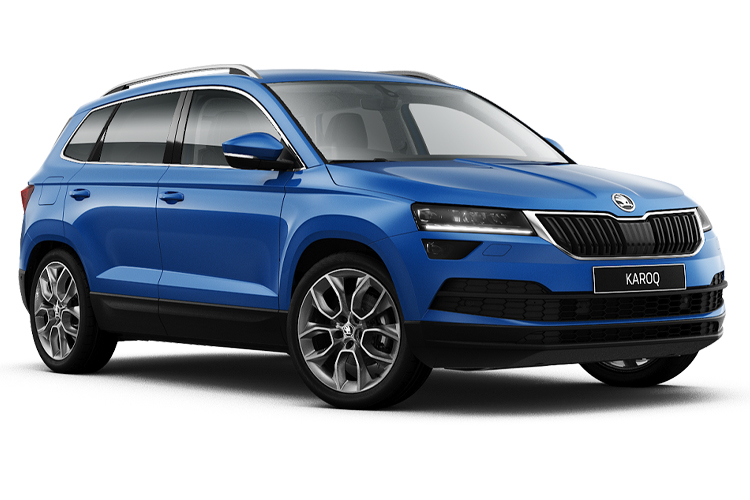 Skoda is having decent success with its mid-sized SUV, the Karoq, recently subtly improved. Jonathan Crouch looks at what this mid-sized Czech SUV has to offer.

Brand identity is everything in the automotive world, so it seems hard to understand why back in 2017, Skoda wanted to abandon one of their most recognisable name plates, that of the Yeti. Yet the Czech maker did just that, replacing that model line with this one - the Karoq. The reason why was that the company wanted to emphasise that this car is a different, larger and more sophisticated SUV than the Yeti ever was - or could be. The Yeti couldn't ever quite decide whether it wanted to be a Juke-shaped supermini-sized SUV or a Qashqai-shaped family hatch-sized model. This larger Karoq has no such dilemma, firmly targeted at the Qashqai sector - and offering a larger boot, amongst other incentives, to tempt buyers away from Nissan's market leader. If you're wondering if the word 'Karoq' has any meaning, then we'll tell you that it's taken from the language of an Alaskan tribe and, roughly translated, means 'car arrow'. Make of that what you will.

Under the skin, this Skoda uses much the same MQB chassis as you'll find in the Volkswagen Group's rival SEAT Ateca and the Volkswagen T-Roc. The set-up with this Karoq is deliberately more comfort-orientated than it is in the Ateca. The various powerplants on offer are all familiar from other Volkswagen Group models. There are six turbo-charged direct injection engine options. Things kick off with a 110PS 1.0-litre TSI petrol unit but most choose the 150PS 1.5 litre TSI powerplant. There's also a 190PS 2.0 TSI variant. There are also three 2.0 TDI diesel engines, offering either 115PS, 150PS or 190PS. The two more powerful diesel drivetrains can be ordered with a 6-speed manual gearbox or 7-speed DSG auto transmission. The 1.5 TSI petrol variant (which is auto-only) uses cylinder deactivation for an exemplary combination of performance and efficiency. Only the top 2.0 TDI diesel and 2.0 TSI petrol variants are available with 4WD; in fact you have to have AWD with these flagship versions. These derivatives are also fitted with a special 'Off Road' mode and hill descent control so that you can more easily slither down slippery slopes. In general though, this Skoda's limited ground clearance makes testing off road forays fairly inadvisable. The Karoq is much happier being used for tarmac use and an option worth considering here is the 'DCC' 'Dynamic Chassis Control' adaptive damping system that can considerably improve the ride over poor surfaces. It works through the settings of the standard 'Driving Mode Select' system.

The Karoq is a slightly bigger car than its Yeti predecessor and much better able to square up to the market-leading Nissan Qashqai in the family-sized part of the volume Crossover SUV sector. This Skoda certainly has a much bigger boot than its Japanese rival, with 521-litres of cargo space, extendable to 1,630-litres if you fold forward VarioFlex middle bench made up of three separate seats that can, if required, be taken out completely. If you do that, a van-like capacity of up to 1,810-litres is freed up. View the car in profile and the longer-than-average wheelbase by class standards is very evident and the side aesthetics are also characterised by short overhangs and a sloping roofline that's visually extended by a contour in the D-pillar. At the front, the headlights flanking the distinctive grille can optionally be ordered with full-LED beams. Inside, for the first time in a Skoda, a digital instrument panel is being offered. And, as usual, there are a range of 'Simply Clever' features, including an electrically-retractable tow bar. And a 'Virtual Pedal' option that allows you to open the power-operated tailgate with a wave of your foot beneath the bumper.

Prices start from around £23,000 but if you go for the flagship 2.0 TDI 190PS 4x4 model and add a few well-chosen extras, you'll probably be looking at close to around £37,000. There are five trim levels - 'SE', 'SE L', 'Scout', 'Sportline' and 'Edition'. Well worth having is the optional 'Skoda Connect services' package. This consists of two things; 'Infotainment Online' gives you online traffic information and can update you on things like fuel prices, parking spaces, current news and weather. Then there are the so-called 'CareConnect Services' which allow you to monitor your car from your smartphone, plus the set-up includes a breakdown call function and will automatically alert the emergency services if the airbags go off in an accident. In terms of camera-driven safety features, the Karoq can offer far more than the old Yeti ever could. Every model comes equipped with autonomous braking - a combination of the brand's 'Front Assist', City Emergency Brake' and 'Predictive Pedestrian Protection' systems. Buyers can also add in Blind Spot Monitoring, Traffic Sign Recognition', a 'Rear Traffic Alert' feature that'll warn you of oncoming traffic when you're reversing out of a space and a 'Driver Alert' system that watches for signs of drowsiness at the wheel. There's also 'ACC' 'Adaptive Cruise Control' and 'Lane Assist' and if you have both these features fitted, you can also have an 'Emergency Assist' feature whereby the vehicle will be brought to a safe, controlled stop, should the driver be in some way incapacitated. A 'Side Assist' system is now optional.

The old fashioned image of SUV vehicles being somewhat profligate when it comes to fuel economy certainly doesn't really apply to the Skoda Karoq. Let's get to the WLTP figures. The 2.0 TDI 150PS front-driven diesel variant that many customers will want manages up to 52.3mpg and up to 143g/km of CO2. Go for the 150PS 1.5-litre TSI petrol unit and you should be able to get up to 44.8mpg and up to 144g/km. The base 1.0 TSI petrol unit manages up to 44.8mpg and 142g/km. Whatever powerplant you choose, as you'd expect in this day and age, all models get a start/stop system that cuts the engine when you don't need it, stuck in traffic or waiting at the lights. And the DSG auto transmission is equipped with a 'coasting' function that at cruising speeds, will disconnect the gearbox, leaving the engine to idle until you next need it. Like most modern diesels, all the TDI units on offer get a selective catalytic reduction filter to cut down on nitrous oxide and have been designed around the use of a urea-based solution called AdBlue. This is injected into the exhaust gas stream to help clean up emissions, the liquid used being stored in a 12-litre tank mounted at the rear beneath the boot. This will need topping up as part of regular servicing and you can monitor its status via dashboard display.

You can see the appeal of this Karoq model. It's spacious, safe, drives well, has a cool but understated image and is affordable to run. In short, what we have here is a class act in a market full of try-hard rivals and a car that strikes an appealing chord between practicality, quality and fashion. True, some of the rivals it has to face are larger, more hi-tech or more efficient. Most of them are pricier too though and it's that very affordability that'll keep this Skoda in the frame for customers who want a more interesting and flexible alternative to yet another Qashqai clone in this class. It's a car that transcends lifestyle snobbery. A family car that doesn't shout 'family'. And a Crossover you could be genuinely pleased to own.