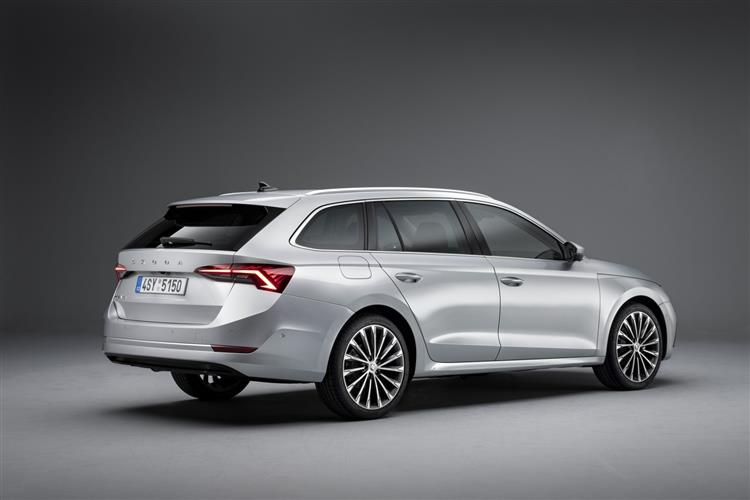 Skoda's improved third generation Octavia Estate now adds a bit of class to what was already quite a spacious proposition. Jonathan Crouch takes a look at what's on offer.

If you're looking for an estate car, then you probably want plenty of carriage space. Once upon a time, older station wagon versions of Skoda's Octavia couldn't fully meet this remit but since the launch of the current third generation model, luggage capacity has been pitched at a class-leading level. Even in this guise though, this model had something of a budget brand feel. It doesn't any more though. The Czech brand has treated its best seller to a smart facelift and the cabin's classier too. The main draw though, continues to be space: there's 1,740-litres of it if you fold the back seats.

As with the Volkswagen Golf and the SEAT Leon, the German engineers who created this car took a pragmatic approach to driving dynamics, deciding that drivers opting for lower order engines wouldn't care too much about cutting edge handling response. So the sophisticated multilink rear suspension is reserved for the performance-oriented vRS models, the most powerful of which uses the 2.0-litre TSI petrol unit borrowed from the Golf GTI. Here though, we're focusing on the mainstream variants that most Octavia customers will be considering, all suspended with a much humbler torsion beam arrangement. A very large proportion of customers opt for entry-level petrol power, previously a 1.2-litre unit but now a more frugal and sophisticated 1.0-litre engine developing 115PS and 200NM of torque. It can be ordered with or without 7-speed DSG auto transmission and in manual form, makes 62mph in 9.6s. Otherwise, the engines on offer are much as before. Petrol people get a 1.5 TSI ACT 150PS unit or, in the top vRS performance models, 230PS or 245PS versions of the 2.0 TSI turbo unit borrowed from the Golf GTI. Those in search of a diesel get either a 115PS 1.6 or 150 or 184PS versions of the usual 2.0 TDI unit. Opt for an engine with 150PS or more and you get the option of DCC adaptive damping. 4WD is an option with the 2.0 TDI engine. And handling? Well as we suggested at the beginning, it isn't really geared towards the needs of the enthusiast driver, though to be fair, bodyroll is well controlled and the steering direct and precise. If you're after more than that, then you'll appreciate one of the sporty vRS models. Horses for courses you see. And if those courses are likely to be on the rough and muddy side, then you'll be interested in the four-wheel drive system also developed for this car, primarily for a Scout estate model with additional body cladding and a raised ride height.

Skoda people will probably quite like the fact that the look and feel of this car doesn't attract too much attention, even in this updated form where the lines have been streamlined, especially at the front. The two adjacent headlights form a dual face with a crystalline look and feature full-LED technology. The brand logo has gained more presence, with the front of the car featuring what the Czech maker hopes is a more powerful and wider appearance. Of course, it remains just as spacious as before and you get a feel for that when you lift the heavy tailgate. There can be no arguments about the 610-litres of space you get in the boot when all the seats are in place. By contrast, if you opted for a really big car like a Mondeo estate, you'd get a mere 537-litres and a car from the class the Octavia used to compete in, such as a Focus Estate yields a mere 476-litres. Now you get an idea of the sheer utility of this car. By folding the rear backrests down, the boot space increases to an impressive 1,740-litres. Skoda prides itself on its 'Simply Clever' philosophy and the Octavia estate lives up to the billing with a double-sided boot floor mat, a net restraint system, multiple bag hooks, a waste bin and numerous bottle holders, multimedia device holders, an ice scraper in the fuel tank opening and a warning-vest holder under the driver's seat. On top of that, there's a coat rack and a remote fold-down function for the rear-seat backrest. The folding passenger seat makes transporting long objects easy. There's even space for the retractable parcel shelf and roof bars under the adjustable variable boot floor.

If you're anything like most, you'll probably be shocked at the prices of new cars. This is a time when Honda can charge you over £27,000 for a diesel Civic and still keep a straight face and as such, the fact that you can buy a Skoda Octavia estate for around £19,500 seems extremely reasonable. Positively generous in fact. Okay, so that'll mean the entry level engine and trim, but even that includes alloy wheels, an eight speaker stereo with a digital radio and Bluetooth compatibility, roof rails, leather trim for the reach and rake adjustable steering wheel, climate control, and a touchscreen infotainment controller. Safety gear includes stability control, hill hold, automatic post collision braking, front, side, knee and curtain airbags. Paying £4,000 more for that Mondeo estate that holds less, seems less well built inside and comes with nothing like as much gear suddenly doesn't seem the smartest choice. Ascend up the range and you can start fitting features like the DSG twin-clutch gearbox which adds about £1,250 to the asking price. There are also some worthwhile extras such as alcantara and leather trim, 'Amundsen' satellite navigation, cruise control, intelligent light assistant, bigger alloys and a remote rear seat fold down facility. An electric panoramic sliding/tilting sunroof is also available for the Octavia estate. Comprising two parts - the front part can be tilted and shifted electrically, while the rear section is fixed - the entire roof module is made of tinted, heat-insulated glass.

The engines on offer are much more frugal than they used to be and a fuel-efficient 1.6 TDI version offers 54.3mpg on the combined cycle and CO2 emissions of only 111g/km. Skoda's engineers have achieved significant improvements in the Octavia's consumption and emission figures thanks to advanced petrol and diesel engines, a low drag coefficient and reduced vehicle weight. This has been achieved thanks to resolute lightweight engineering, a progressive body design, utilisation of high and ultra-tensile steel and a careful selection of materials. The entry-level 1.0-litre petrol engine emits just 109g/km of carbon dioxide, which is amazing for a petrol estate of this size, but even the 2.0-litre diesel can return up to 53.3mpg on the combined cycle. All figures are WLTP-rated converted to NEDC2. Residuals? It's hard to imagine there won't be a long queue of ready buyers who want a smart, cost-effective, reliable and practical car.

The Skoda Octavia Estate is efficient, well built and decently equipped which are all decisively good things. But the key to this car's big draw is simple. It offers a lot of space for not a lot of money. That's a combination that gives pricier rivals like Ford's Mondeo estate and Peugeot's 508 SW a real headache, especially since the announcement of this revised Octavia model with its smarter look and classier cabin.. The best value is to be had at the entry-level end of the Octavia estate range. At the top end of the line-up, it's easy to see many trading equipment for badge equity and defecting to Volkswagen or Audi products, but given that they're all built by the same group, that might not be such a bad thing. Not so much if the money was going to BMW or Mercedes though. As it stands, this is a solid eight out of ten car. If you're sensibly-orientated, you'll love it.