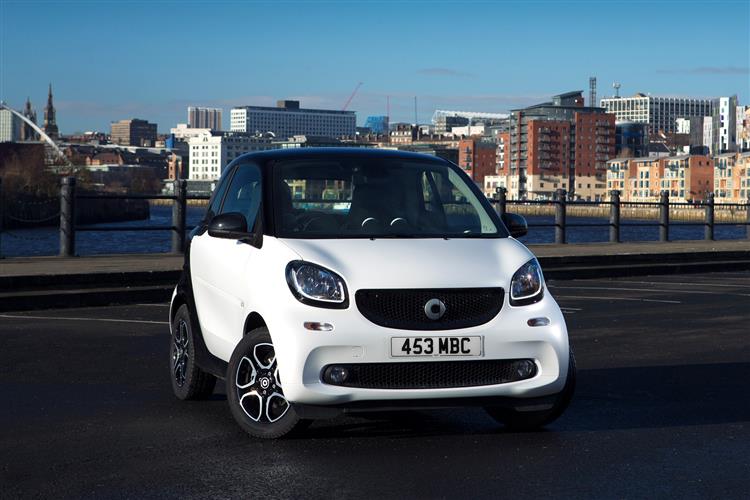 Smart's evergreen fortwo citycar goes under the cosmetic surgeon's knife once more. An all- new fortwo is on the way but, in the meantime, the cutest city scoot has never looked better. David Vivian checks it out

The Smart fortwo is living proof that if a good idea acquires enough traction quickly, it can largely shrug off any inherent shortcomings it may have. Originally a collaboration between watchmaker Swatch and Mercedes-Benz, the first 1998 Smart city car was a radical slice of 'smart' thinking that posited the idea that most so called city commute 'minis' were simply too big and that the rear seats and the attendant bodywork were unnecessary. The resultant four-wheeled plastic capsule was incredibly short, very strong, ingeniously packaged, amazingly economical and cute as a kitten with a ball of wool. It was also slow, quite noisy, had a pretty appalling ride and possibly the slowest automated manual transmission ever fitted to a car. Despite this, the first generation car shifted over 770,000 units. On the back of this success, Smart decided to branch out and build a five-door family hatch (based around Mitsubishi mechanicals) and a very pretty roadster/coupe, using a souped-up version of the city car's turbocharged three-cylinder Mitsubishi-sourced engine. Although both new lines were vastly better to drive, neither really caught on, plunged Smart into the red and were eventually canned. So, unfortunately, were half the jobs at the factory. Mercedes decided that Smart should concentrate on the baby car that continued to sell in healthy numbers and make it as well as it could. The second generation car ameliorated many of the original car's flaws without quite solving them - a situation that persists. The future for Smart looks bright - the Forspeed concept suggesting an exciting new direction for the next generation - but in the meantime, the facelift should keep this little ball of fun rolling.

We've all seen Smart fortwos bowling along the motorway at unlikely velocities - somewhat erratically if there's a strong crosswind blowing. But their natural habitat, the place they really come into their own, is around town, zipping into gaps even a 1950s Fiat 500 would have to pass up. And the saying 'turn on a sixpence' has a more literal feel, too, thanks to the astonishingly tight 8.75m turning circle. The facelifted range continues with the same line-up of 1.0-litre turbo triple petrol engines (available with 71, 84 in Mhd micro-hybrid form or, in Brabus trim, a useful 102bhp) and a 0.8-litre 54bhp Cdi diesel which isn't as slow as you might imagine thanks to a generous helping of torque and, besides, is claimed by Smart, to be the world's most economical production car. Despite the much improved transmission - a five-speed semi-auto Getrag with Auto and steering wheel paddle modes - shift times are still a little laggardly but much easier to live with, especially given the extra torque of the eager and characterful little 1.0-litre engine means that there isn't so much cog-swapping going on anyway. Chassis-wise, it's probably best to steer clear of the Nurburgring, even in the fat-tyred Brabus, but that doesn't mean driving a Smart can't be fun. At least it doesn't ride too badly these days, the helm responds crisply enough, grip levels are surprisingly high and, around town, few things this side of a dispatch rider with an urgent delivery to make feel more nimble. Accept its limitations and the Smart can be an engaging way to travel.

Smart says the fortwo has been 'substantially revamped'. That's an overstatement, but is does look a somewhat bolder. It sports a larger radiator grille with a more prominent integrated chrome Smart logo, remodelled front aprons, side skirts and rear apron and horizontally arranged optional LED daytime driving lights. The previous model's twin air inlets under the number plate have been combined into a single unit. There's also a choice of three new alloy wheels: the fortwo passion comes with a new 9-spoke design and there are two slightly different three-spoke designs fitted with wider tyres to round off the range. The expanded colour chart includes matt anthracite for the first time and the BRABUS Xclusive model becomes optionally available in white. A more fundamental choice is between the two body styles: a hard-topped coupe and the cabriolet with its electrically-retracting fabric roof and removable roof bars. In addition to the three soft top colours previously available (black, red, blue), the smart BRABUS tailor made programme offers six more soft top colours. Inside, trim has been upgraded with a crystal grey leather/fabric combination for the seats, an imitation leather/fabric mix for the door trims and black imitation leather for the instrument panel in combination with a grey knee pad. As before, and somewhat unusually, the fortwo's passenger seat is mounted 15cm further back than that of the driver so that shoulder room can be maximised, and people who've never sat in a Smart before are invariably surprised at how spacious the cabin seems. Even for the very tall, the driving position is remarkably uncompromised. Not so the boot which is tiny, though, in theory, there's up to 340 litres if you stack right up to the roof. The two-piece tailgate with its separately-opening glass window is wide-opening and the bottom part is strong enough for you to sit on.

The facelifted fortwo's pricing will keep in line with the outgoing model's so expect to pay between £9,000 to £10,500 for the standard models, though that will rise steeply if you fall in love with the comprehensive options list. The size-to-price ratio isn't wonderful when you consider you could have a Peugeot 107 for the price of an entry-level Smart or a Fiat 500 for the price of one of the plusher models - but then that's always been the case with the smallest Smart. You'll pay a premium of just under £2,000 for the equivalent cabrio versions.

It's easy to see why mhd (micro hybrid drive) Smart fortwos have become popular, as they offer the best compromise between performance and parsimony. The system's start/stop function disables the engine at traffic lights, junctions or in traffic queues and helps the 71bhp motor post a CO2 figure of just 97g/km, which equates to over 65mpg on the combined cycle. The whole smart range now emits less than 120g/km CO2, which makes all models exempt from the cost of the annual road fund licence for at least the first year from registration. But if you're really serious about slashing running costs, the Cdi diesel is in a class of its own, returning an astonishing 85.6mpg on the combined cycle with CO2 emissions of just 86g/km.. Clip-on, clip-off plastic panels help with cheap insurance groups which for mainstream models vary between 2-3, while residual values are among the best in class.

Often derided in magazine road tests for not offering the polished dynamics, refinement and comfort of more conventional, four-seater city cars, the baby Smart nonetheless has a loyal and enthusiastic following that appreciates its chic style and quirky charms. It may struggle to convince on the open road but, in the cut and thrust of urban traffic, nothing nips, tucks and parks quite like a Smart fortwo. The most recent facelift once again keeps that original unique shape looking fresh, cute and appealing and is merely the latest development in an evolutionary process that, to be frank, has seen the Smart improve out of all recognition since its 1998 debut. With fuel prices and environmental pressures seemingly on an ever upward spiral, the Smart fortwo has never been more relevant and its ability to put a smile on your face never more welcome.