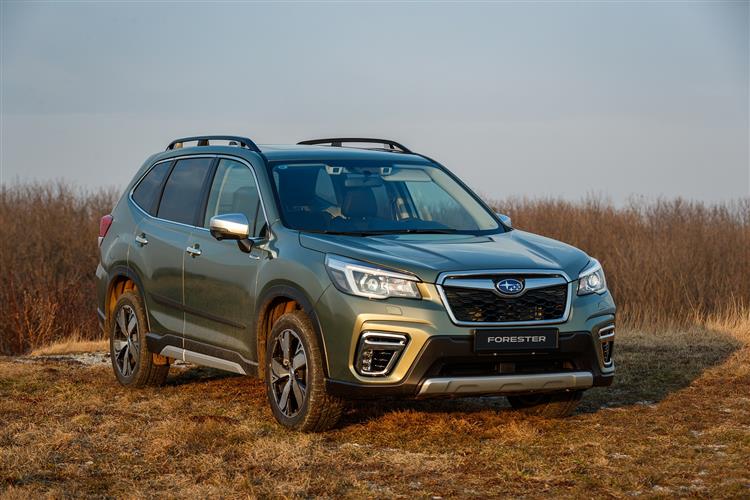 Wouldn't it be nice to find a properly capable mid-sized family SUV? A car that could walk the walk as well as talking the talk? A car like this one, Subaru's fifth generation Forester, now enhanced with an e-Boxer mild hybrid petrol powertrain. Everything about this design seems to be nicely balanced, from the shape and positioning of its freshly electrified Boxer engine to the shape and positioning of its intended clientele. People who want something fashionable, but don't need to make a fashion statement. People who want something tough and rugged, but don't need to tackle the Rubicon Trail. So the smarter styling inside and out will go down as well as the Symmetrical All-Wheel-Drive system and the symmetrical off road technology. You buy this car for what it does, not for what it says about you. Talk to almost any Forester owner and they'll tell you of times when they cruised past other similar vehicles that came unstuck when the going got tough. They'll tell you that nothing ever fell off. That nothing ever went wrong. And that nothing would persuade them to buy anything else.

For most of its recent life, the Forester has sold primarily with a Boxer diesel powerplant and it's taken some time for the brand to shift its engineering emphasis. This e-Boxer mild hybrid unit looks promising though. Thanks to a small electric drive motor with 16bhp and 48 Ib ft of torque powered by a little lithium-ion battery, the Forester can in this form offer emissions-free motoring for short periods. The whole set-up's relatively light (it adds only 110kgs to the 150PS 2.0-litre normally aspirated petrol powertrain it's mated to). And it drives through a re-engineered version of the same belt-driven CVT auto gearbox that other Subarus use. Best of all for loyal Forester towers, there's none of the usual reduction in hauling capacity that hybrids of any kind are usually afflicted with. This one can tug almost 1,800kgs, helped by the brand's usual asymmetrical four-wheel drive system. On the move on tarmac, the hybrid system's electric motor provides a bit more instant pulling power, especially when using the car's provide 'S' driving mode. Steering wheel gearchange paddles are provided and a rear stabiliser has been added for a little more cornering decorum. Off road, the Forester, as you'd expect, makes light work of tough terrain thanks to decent ground clearance, that responsive and capable 4WD system and standard hill descent control.

Subaru insists that this is an entirely new model, but at first glance, you'd sware it was merely a mild evolution of the old fourth generation car. Quite possibly though, that's what loyal Forester owners want here. They'll immediately notice the revised front end design, with its sharper angles and more upright grille. In profile, this MK5 model's extra length might be noted. And at the rear, where this revised design's additional width is evident, there are smarter tail lamps and contrasting black trim above the numberplate. Inside, the cabin has a more expensive feel than the rather utilitarian interior of the previous model - which is just as well given the increase in price. There's nothing here to give Audi designers any sleepless nights but it's a big step forward for a Forester. Generally, it's more spacious for passengers than before, which is particularly noticeable at the back. A faster automatic tailgate accesses a large boot - 1,779-litres with the back seat folded.

Pricing for this Forester e-Boxer is pitched at around £34,000 for the standard variant - or around £37,000 for the plush 'Premium'-spec version. Expect lots of equipment, even in the base variant. The kit list runs to full-LED headlights with auto activation and high beam assist, front fog lamps, heated power-folding mirrors, UV-protection glass that's privacy-tinted further back, rain-sensitive wipers, wiper de-icers, headlight washers and a Thatcham category 1 alarm/immobiliser. You get alloy wheels of course too. Inside, there's dual-zone air conditioning, a Keyless access system with a push-button starter, heated front seats and cruise control, plus leather for the gearstick and the multi-function steering wheel. Also standard is the Subaru infotainment and audio system with its colour touchscreen, the portal via which you access the DAB stereo system and use the Bluetooth 'phone functionality. The package includes 'Apple CarPlay' and 'Android Auto' smartphone-mirroring, voice recognition, a CD player, dual USB ports and an aux-in jack. Safety provision is taken care of by Subaru's impressively complete package of 'EyeSight' driver assist technology. The set-up uses two stereo cameras - one mounted either side of the rear view mirror - to monitor the road for up to 110 metres ahead as you drive. As a result, this car can offer 'Adaptive Cruise Control', 'Lane Keep Assist', 'Lane Sway and Departure Warning, 'Lead Vehicle Start Alert', 'Pre-Collision Throttle Management', a 'Rear Vehicle Detection System' package, 'Blind Spot Detection', 'Lane Change Assist' and 'Rear Cross Traffic Alert'. It's all very reassuring.

Normally, a more capable car is a more expensive one to run. You'd certainly expect that the permanent Symmetical 4WD system of this Forester would exact more of a fuel and emissions penalty than would be found on most other rivals, cars that trundle around in two wheel drive most of the time, with all-wheel traction only being introduced when needed. Thanks to the mild hybrid technology, you might be pleasantly surprised on that score, but don't get your hopes up too high; Subaru is only claiming an improvement of around 11% over the city economy figures of the previous generation 2.0-litre petrol model here. Expect 34.7mpg on the WLTP combined cycle, with CO2 emissions at 154g/km (NEDC). What else? Well there's the peace of mind of a five year / 100,000 mile warranty that embarrasses the three year / 60,000 mile package most rivals offer. You also get a three year recovery and roadside assistance programme you'll almost certainly never need.

If you've always found yourself attracted by the tough utility of a Subaru Forester but were put off by the prospect of below-par running costs, then this fifth generation e-Boxer model might be exactly what you're looking for. Most hybrid SUVs are in some way compromised when it comes to things like towing and off roading; this one isn't. True, it doesn't have the kind of electric capability you'd get from a pricier, less capable plug-in rival. But you may not need that - and if you don't, then this MK5 Forester's mix of old-school toughness and new generation technology might just be right up your street. Crucially, this is now an SUV you could consider as a realistic alternative to more compromised competitors. This Forester is fashionable without being trendy. And built to last while never feeling utilitarian. In short, it's the kind of car it really ought to be, a vehicle in which four wheel drive is fundamental, rather than simply an optional extra and as a result, one of the best cars in its class to buy if you really plan on using it to its full potential.