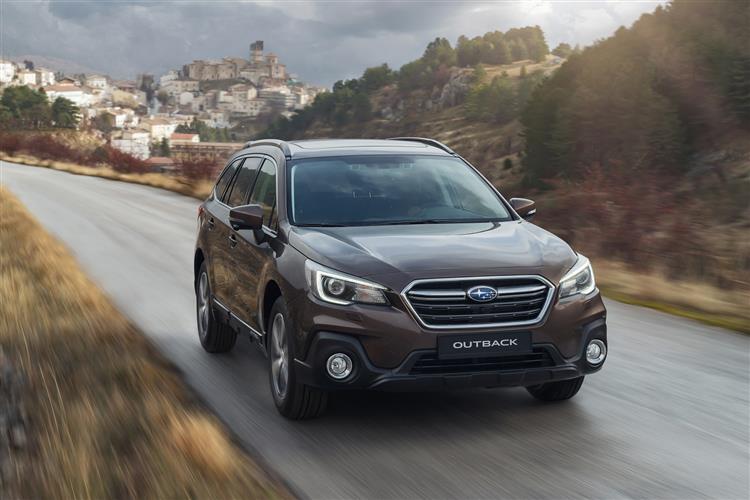 The Subaru Outback has been thoroughly updated and it now makes more sense than ever. Jonathan Crouch reports.

The Subaru Outback. With a history going all the way back to 1995, it was the original off-road-orientated family estate, with an image that, at the turn of the century, placed it comfortably alongside big Volvos and Land Rovers as a preferred choice for the tweed jacketed country set. In more recent times, it's been a rarer sight on our roads - something Subaru's importers would like to change, with the introduction of a much improved version of the fifth generation design that was originally launched in 2015. Enhancements to this revised model include the standardisation of petrol power, the addition of a new front and side-view camera system and enhancements to the 'EyeSight' camera-driven safety set-up. More importantly, it's all still matched to the same tough, practical 4WD package.

Subaru doesn't offer its 2.0-litre diesel engine any more - or manual transmission come to that. So Outback customers are limited to a 2.5-litre 175PS four cylinder petrol powerplant mated to a Lineartronic automatic gearbox. Well, when I say 'automatic', it's strictly speaking a seven-step constantly variable transmission with 'virtual' ratios, but you get the idea. There's no clutch pedal. As usual with the brand, the engine up-front is a Boxer unit and due to its size and shape, it's installed lower down and further back than a conventional powerplant for a lower centre of gravity. Boxer technology - with its unique 'punch-counterpunch' rotational cycle - offers smoothness, low vibration and noise, plus excellent accelerator response. The 2.5-litre engine produces 235Nm torque at 4,000rpm. As before, you get a healthy 200mm of ground clearance and Subaru's Symmetrical All-Wheel Drive (AWD) system features on all models. For better off road traction, the Lineartronic CVT auto gearbox is mated to a centre differential with a viscous limited slip differential. Helping off road is the clever 'X-Mode' set-up, an integrated control system that oversees and co-ordinates the operation of the transmission, the All-Wheel Drive mechanicals and the VDC dynamics control. Press the appropriate dash-mounted button and 'X-Mode' tweaks all of these systems for off road use and adds in Hill Descent Control for steep slopes. The result is a set of off road capabilities not far off those of full-blown SUVs.

The exterior changes made to this revised Outback model are subtle and limited to a minor redesign for the front grille, bumper, door mirrors and headlights. The hexagonal grille redesign showcases a sharper, more defined shape and incorporates the distinctive Subaru wing design, which draws parallels to the horizontally opposed Subaru Boxer engine. If you haven't been in a Subaru for a bit, you'll probably be impressed by the cabin, which is a considerable improvement on previous interiors that the brand has brought us. You still wouldn't mistake the interior for something produced by a premium German brand but the slightly more utilitarian hard-wearing feel is in keeping with this SUV brand. There's one of the best steering wheels in the class and even the touch screen system is easy to operate. The boot measures 559-litres to the tonneau cover, with 1,848-litres available when the seats are folded. That's about the same as, say, a pricier Volvo XC90. We like the little touches too. The memory function for the electrically-powered tailgate so you can set it at a specific height in multi-storey carparks or garages with low ceilings. The tailgate interior grip handle that can act as a hanger rail for things like damp wetsuits. The strengthened cargo hooks that can take up to 50kgs. And the useful foot-step on the rear sills that makes it easier to get up to roof level to oversee transportation of longer or bulkier items around the standard-fit silver roofrails.

Prices start at £30,000 for the base 'SE' model, rising to around £33,000 for the plusher leather-lined 'SE Premium' variant. Both versions come only in 2.5-litre petrol Lineartronic automatic form. The most recent updates include the addition of a new front view camera, which has been positioned below the brand badge on the front grille. This can monitor a 180-degree area in front of the car that would normally be in the driver's blind spot. A furtherl side view camera is mounted at the base of the passenger door mirror. A 'view' switch positioned next to the X-Mode button by the gearstick allows the driver to move between display options on the centre touchscreen. Other more conventional standard kit features include automatic LED headlamps and headlamp washers, cruise control, Active Torque Vectoring, 17-inch alloy wheels, heated front seats, electrically-adjustable driver's seat and privacy glass, as well as a 7.0-inch touchscreen infotainment system, incorporating satellite navigation, audio, smartphone connectivity and a rear view parking camera. Also standard is the camera-based 'EyeSight' safety system, now embellished with 'Lane Keep Assist'. The 'EyeSight' package monitors the road and traffic ahead for potential hazards and includes autonomous Pre-collision Braking Control and Pre-collision Throttle Management, Adaptive Cruise Control and Lane Departure & Sway Warning. The Outback has scored a five-star EuroNCAP safety score, so it's hard to put your family in anything much safer.

Subaru owners tend to be a well-informed bunch and they probably won't thank us for letting a few of their secrets out. The big one is residual value. The Outback has long been a big winner in that department and things have only got better in recent years, in the main due to the company's excellent five year, 100,000 mile fully transferable warranty. That means that if you sell the car after, say, three years and 40,000 miles, the new owner gets a two year, 60,000 mile warranty. Try that in a Volvo XC90 and the new owner gets nothing, zilch, zip, nada. The same goes for the poor schlub buying a used Skoda Octavia Scout, Vauxhall Insignia Country Tourer or even an Audi A4 Allroad. The 2.5-litre engine manages 38.7mpg on the combined cycle and 166g/km of CO2. You also get a three year recovery and roadside assistance programme you'll almost certainly never need.

If you really don't want an SUV but really need one, there are plenty of plush jacked-up 4WD estate cars than can claim to offer a realistic alternative. Yet few of them would last long if regularly used up-hill, down-dale on the average rutted farm track. Here's an exception. This fifth generation Outback may not be able to replace a fully-fledged off roader for those living halfway up a mountain peak but for a vehicle of this kind, it really is extraordinarily capable. Previous versions of this model were just as good, but weren't really large or plush enough to compete against the Volvos and Audis that represent this car's most natural competition. That's now changed. Today, the facts are that one of these is more practical than an Audi allroad or Volvo XC90 rival - and at the same time, a lot less expensive, with current asking figures really not very far above the less capable rival models you'd get from mainstream brands like Skoda and Vauxhall. These days, Outback ownership also represents the thinking family's alternative to a RAV4 or CR-V-style soft roading compact SUV. True, there are still more dynamically able models of this kind, with smarter cabins and trendier badges. As an overall package though, this Outback is now a stronger contender than ever before. It's always been the most capable car of its kind when conditions are at their worst, but now it's a much stronger everyday choice too. It deserves its moment in the sun.