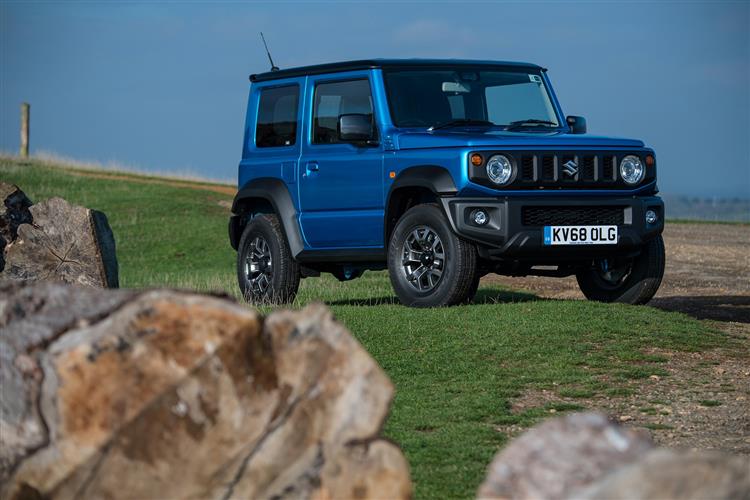 Suzuki's little Jimny SUV is well worth considering if you're after something a little different. Jonathan Crouch checks out the new era version.

New Jimnys don't come around very often. The version prior to this fourth generation one was on sale for two decades, which is why perhaps this model line has such a cult following. It's one of those utilitarian SUV icons - like the Land Rover Defender, the Jeep Wrangler and the Mercedes G-Wagen. And, just as those cars have in recent times been painstakingly updated in a way that retains their essential character, Suzuki has laboured long and hard to ensure that this MK4 Jimny model line continues to be true to the values it was originally born to serve.

Let's get this straight: if you've no intention of ever going off road, don't bother with this Suzuki. You'll hate it within the first half mile. The low speed ride crashes over bumps and the tall, slab-sided shape rolls its way through the bends. To be fair, this version is better in this regard than the previous one but that's not saying much. On the plus side, there's only 1,135kg of mass to roll about and the steering does give some sort of idea as to what's going on beneath you. Power comes from a 1.5-litre normally aspirated petrol unit offering 109bhp and a top speed of just 90mph. Off road of course, things are very different. It's no exaggeration to say that this little car can get to places that larger, pricier more sophisticated SUVs couldn't think about. Light weight will do that for you. Suzuki's mission statement with this model line - to make 'the one-and-only, small, lightweight four-wheel-drive vehicle' - remains credible thanks to the engineering that lies beneath that bodywork. You're offered 2WD, 4WD and 4WD with a low mode. And you get a ladder frame chassis, three-link rigid axle coil spring suspension and four-wheel drive. To it has been added fresh tech such as hill hold and descent control, brake support and various driver assistance systems, all of it intended to make the car even more capable than before.

Appropriately, the Jimny has been designed more for the mud than the metropolis. Flared wheel arches, bulky side panels and that spare wheel on the tailgate give it a purposeful look intended to reflect a 'rugged personality'. Longstanding Jimny design cues like round headlights and independent indicators are carried forward and the front grille will be familiar to previous buyers too. It's 45mm wider and 20mm higher than its predecessor, but actually 30mm shorter. Inevitably, those compact dimensions mean that space is at something of a premium inside. The footwells are tight for instance and the driver and front seat passenger will need to be on friendly terms. There are only a couple of seats in the back and there's not much legroom for those confined there. If you do have rear seat passengers, you'll have just 85-litres of boot storage space - yes, you read that right; folding the rear bench increases that figure to a mere 377-litres. Mind you, that's 53-litres more than the previous generation model could offer. The dashboard's pretty functional and black plastic predominates around the cabin. The seats are comfortable but not really intended for overly long trips.

Prices start at around £15,500 for the entry-level 'SZ4' manual variant; the alternative is an £18,000 'SZ5' version of the same model. Go for that 'SZ5' and you'll be offered automatic transmission for an extra £1,000. 'SZ5' niceties include climate control, rear privacy glass and heated front seats. You also get Suzuki's 7.0in touchscreen at this level, complete with 'Apple CarPlay' smartphone-mirroring. The old car didn't have this of course, being as it was originally released nine years before the iPhone was invented... In true Suzuki style, you can also jazz up your Jimny by choosing from a huge accessory range. Bear in mind, however, that these things are likely to do little for residual values when the time comes to sell. 'SZ5' customers also get the brand's Dual Sensor Brake Support (DSBS) autonomous braking set-up. If this system determines that there is a risk of collision with a forward vehicle or pedestrian, it issues an audio and visual warning, increases braking force, or applies strong automatic brakes depending on the situation, in an effort to avoid the collision or reduce damage. Other functions include lane departure warning and a weaving alert function to help the driver keep alert, plus there's high beam assist.

The 1.5-litre engine can only manage 41.5mpg (combined NEDC) and 178g/km of CO2 (NEDC). This is largely thanks to the weight of those 4x4 mechanicals but it's not the most modern powerplant either. What else? Well, once your Jimny has been registered for three years, it will become eligible for Suzuki's fixed price service package which will enable you to get servicing carried out for a single fixed price that will include parts, labour and VAT. There are around 180 Suzuki dealers in the UK and they're noted for excellent customer service. You can also even cut the cost of regular maintenance with a 'Service Payment Plan' that covers you for anything between one and three garage visits. Like every Suzuki model, this one comes with a three-year, 60,000-mile warranty: the brand maybe needs to think about extending this to match rivals now offering four, five or even seven-year plans. There's also a year's breakdown cover that extends across the whole of Europe and includes roadside recovery. You can extend it yourself at extra cost via arrangement with your dealer. A 12-year anti-rust guarantee comes with the car too.

For Suzuki, one nice thing about having so many small SUVs in its model line-up is that each can be quite distinct in its appeal. If you don't like the agricultural feel of this Jimny on road, then no problem: the brand has Ignis, Vitara and S-CROSS models lined-up to look at that will suit you much better. None of these models though, has the unique appeal that so marks out a Jimny. Like all really unique automotive products, it's virtually class-less. OK, it's more than a little rough around the edges on a paved surface, but this little Suzuki has real character, a rare find in cars costing twice as much. And as ever, no small rival can get near it for off road ability. As an extra car for the wilds at weekends, we think it'd be just about perfect.