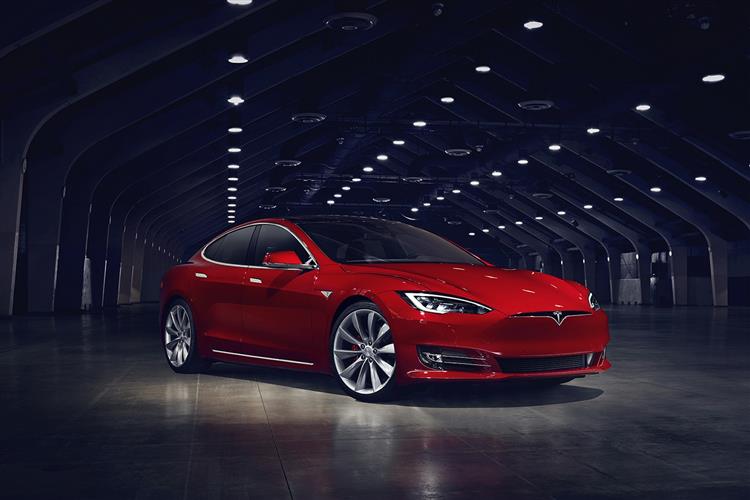 What do electric cars say to you? For the most part, they're rather inoffensive city scoots. Get one out on the open road and they're often only about half an hour from leaving you stranded on the hard shoulder with no juice. That's the way electric cars have been developed by big car companies. Tesla isn't a big car company. It has never been rooted in the culture of the internal combustion engine, so perhaps it's understandable that when it sets out to build an electric vehicle, things are a bit different. Co-founded by Paypal creator, Elon Musk, Tesla has been committed from the word go to changing how we think about electric vehicles. The Model S may look like a relatively conventional luxury car but it's anything but. It's a car that has the power to fundamentally alter the status quo in this sector. Electric power isn't just for small cars. It works really well with big ones too.

What are the driving characteristics you'd look for in a big luxury car? We'd be looking for hushed refinement, a smooth step-off the line, instant acceleration as soon as you prod the throttle and the handling ability of a smaller car. The Tesla Model S delivers all of these things and more. The 2.2-tonne kerb weight hints at a rather portly demeanour but the Model S handles a good deal more sharply than you might imagine. The steering can be switched between three settings - Comfort, Normal and Sport - changing the weight of feel but not markedly adjusting the level of feedback. Ride quality is better than you'd expect from a vehicle running on 21-inch wheels. Air suspension is optional and worth having. As you'd expect from an EV, there's no gearbox as such, so power transfer is even smoother than the best automatic transmissions. That power comes courtesy of batteries developed by Panasonic which sit under the floor of the car, keeping the centre of gravity low, while the electric motor sits atop the rear axle. Tesla now only offers 100 kWh variants of this car. There are two variants on offer, the 'Long Range' model, which can offer a 379 miles WLTP rated driving range; and the 'Performance' version, where the driving range figure is WLTP-rated at 367 miles. Even with the base 'Long Range' version, sixty is just 3.7s away from rest, so you'll be looking at very rapid progress. All derivatives get standard Dual Motor All Wheel Drive, which gives you get two electric motors, one sitting on the front axle, the other driving from the rear. With the power spread around the drivetrain, you've of course got the perfect recipe for AWD traction. The same AWD set-up is used by the insane flagship 'Performance' variant. 'Insane' is a word we feel we have to use because it designates the most frantic of this top Tesla's three driving modes - the others being 'Normal' and 'Sport'. Go 'Insane' and 60mph is just 2.3s away from rest, courtesy of a 761bhp combined power output. As advertised, there's nothing else with four or five seats that can get remotely close to this kind of pace.

Tesla deliberately set out to style this car in a relatively conservative fashion so as not to alienate its core buyers. There's even a dummy air intake at the front. The car it most closely resembles in external dimension is a Porsche Panamera, but when you check the tape measure, you realise quite what a massive car this is. At 4978mm long, 1964mm wide and 1435mm high, it's 8mm longer, 33mm wider and 17mm taller than a Panamera, which is already a pretty sizeable hunk of automotive real estate. The width makes it feel a handful on narrow city streets but there's plenty of space inside. The car is a comfortable five-seater and can even be configured into a seven seat mode thanks to a pair of the cleverest rear-facing occasional seats we've ever seen. They flip out of the boot floor and while they may only be good for small kids, it's a trick that few will see coming. With no internal combustion engine to package, the Model S has storage front and rear totalling a massive 895-litres. Fold the rear seats flat and you get 1,642-litres of luggage capacity. The dashboard is dominated by a monster 17-inch colour touch pad display that controls everything from the air-conditioning to the air suspension. Parts quality inside is extremely good although the eagle-eyed amongst you might well spot some Mercedes-Benz switchgear. Still, that's no bad thing.

So, how much will you pay for this taste of your motoring future? A little more than used to be the case for a Model S because Tesla no longer offers this car with its feeblest 75 kWh battery. The larger 100 kWh battery features with the volume 'Long Range' version, which costs around £78,000 and includes the clever Dual Motor All Wheel Drive system that now comes as standard. Top of the range, priced from around £93,000, is the 'Model S Performance' derivative, one of the fastest and most unique cars in the world. You certainly get Performance, the 100 kWh battery here mated with an electric motor offering almost twice as much grunt - 761bhp! - and enough pulling power to ensure that the Dual Motor All Wheel Drive system will have its work cut out in transmitting the torque to the tarmac.

Owning a Model S is different from conventionally powered vehicles. There's no petrol bill and service is minimal. The annual service fee covers an annual inspection, replacement parts like brake pads and windscreen wipers, 24 hour roadside assistance, system monitoring, remote diagnostics, software updates and new features sent through the touchscreen. It's possible to charge the battery half way in about 30 minutes using Tesla's 'supercharger' but as with most elements of this car, it requires a change in your way of thinking. The car responds best to nightly recharges, but will happily sit for a couple of weeks at an airport while you holiday without losing significant charge and the battery pack has no 'memory effect'. Over longer stationary periods, the batteries will slowly lose their charge. If left at a 0% state of charge for period of time, you may need a battery replacement. The batteries are guaranteed for 8 years with a full replacement billed at $12,000 USD. Tesla reckons that the 100kWh 'Long range' model can go 379 miles on the WLTP test (367 miles for the Performance version), but a realworld range is more in the region of 300 miles. Charging takes about 8 hours from a 7kW wallbox, but you can replenish the battery up to around half its capacity in about 30 minutes if you use a Tesla Supercharger station.

The Tesla Model S is a remarkable vehicle. It changes the way you'll view the whole concept of a motor car. As long as you're willing to alter your long-held preconceptions of what an automobile demands and, in turn, delivers, the Model S demonstrates that the genuinely practical electric vehicle has been achieved. Caveats are few. Yes, battery charging does require a little more thought than just topping up a tank and if a car is shared between a married couple for instance, you'll both need to be on the ball with it. Other than that, it's a tour de force. The interior is adventurous, the packaging ingenious, the styling sleek and mature in its execution. It's searingly rapid, wonderfully refined and rides and handles well. If this is the future of cars, bring it on. The internal combustion engine has had a good innings and certainly has charisma, but the Tesla Model S opens a window to a better way.