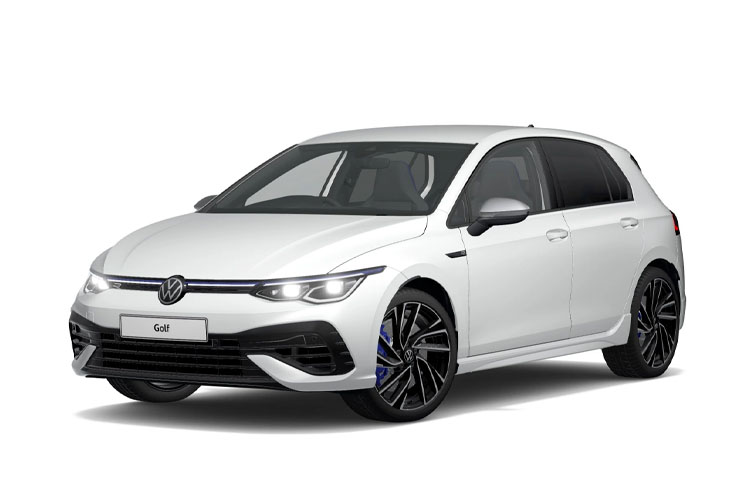 We've had the Golf R around in various forms since 2009 and the formula it offers hasn't fundamentally changed much in that time. There's VW's 2.0-litre TSI turbo petrol engine in its fastest form, 4MOTION 4WD and a slice of Golf GTI engineering tuned up to the max. This latest version, based on the current MK8 Golf architecture, doesn't deviate much from that script but does usefully embellish it. And of course, predictably, it claims to be the quickest and most powerful Golf ever made. That isn't enough to allow it to fully take on uber-fast super hatches like the Mercedes-AMG A 45 or the Audi RS3. But the Golf R significantly undercuts both these models on price and in real world point-to-point motoring probably isn't much slower. Plus a major draw is that its pavement presence is that bit more understated. You could get away with one of these in the company carpark without Directorship-level eyebrows being raised. Sounds tempting.

So to what you need to know here. The fourth generation 'Evo 4' version of this Volkswagen's EA888 2.0-litre TSI turbo petrol unit now puts out 320PS. Just as it does in the Tiguan R and Arteon R models that also use it. 62mph from rest occupies 4.7s (0.2s faster than the previous car could manage) and if you pay extra for the optional 'R-Performance upgrade' package, Volkswagen will remove the 155mph speed limiter so that 168mph is possible. All this motor's pulling power is available from just 2,100rpm. Power though, is nothing without control - and this Golf R has more of that. For the first time, power can be distributed not only between front and rear axles but also between the rear wheels. Thanks to a new torque vectoring system using a pair of electronically operated multi-disc clutches, output can be balanced across the rear axle from 0-100% within milliseconds. You're going to want that optional 'R-Performance' upgrade package because it includes two extra driving modes. 'Special' was configured for optimum performance at the legendary Nurburgring Nordschliefe race track (around which the latest car is apparently 17 seconds quicker than its predecessor). There's also 'Drift', configured for general wild racetrack use. Changes common to both Golf R variants include 10% stiffer springs, a 1.3-degree front axle camber change and steering software tweaked to be more direct. The brake discs are 17mm bigger and feature crisper pedal response. And the front aluminium subframe is 3kgs lighter. All good to know.

Apart from that hoovered-to-the-tarmac ride height, the Golf R is distinguished by its 18-inch 'Jerez' alloy wheels (upgradeable to 19-inchers), full R body kit, roof spoiler and quad exhaust pipes - a feature that subtly hints at the model's potency compared with other Golf models. The model's brake callipers are finished in the hallmark shade of Volkswagen R blue, and feature the R division's logo, while the car's door mirrors are finished in a matt chrome effect - another identifier of the powerful and enthusiast-focused Golf R. Inside, a bespoke, heated R steering wheel features, with a new R button which allows the driver direct access to the car's newly enhanced range of drive modes without needing to take their hands away from the wheel. Extended paddle shifters also add to the driver-focused convenience of the model's cockpit. Sports seats with integrated head restraints feature a 'Sardegna' design in black-blue cloth, unique to the new R models, while the outer areas are in ArtVelours. Otherwise, everything is much as it would be in an ordinary Golf. There's comfortable space for a couple of adults on the back seat and the convenience of a reasonably-sized 380-litre boot.

This Golf R was priced from just over £39,000 at launch. Most customers will want to find the £2,000 extra necessary for the optional 'R-Performance Package'. It brings upgraded 19-inch 'Estoril' alloy wheels, a performance rear spoiler for added downforce, and an increased top speed of 168 mph (where permitted). The pack also adds two new driver modes; Drift and Special. Drift mode is entirely focused upon driver enjoyment away from public highways. This mode uses the full potential of the new R-Performance Torque Vectoring and enables the driver to drift the new Golf R on private tracks. The pack also introduces a 'Special' mode that provides the car with the perfect setup to tackle the famously challenging N??rburgring. This is an extension of the standard Race driving mode, in which the engine sound is increased, while the DSG, optional DCC, progressive steering and the all-wheel drive system are adjusted to a sportier set-up. Several accessories are available for the Golf R including an Akrapovic titanium exhaust, panoramic sunroof, Harmon/Kardon sound system and a head up display. Volkswagen also says that this current generation model will be upgradeable, so if required, features like adaptive cruise control, light assist and a wi-fi hotspot can be added and enabled after you bought the car. Most owners will want to consider the option of adding DCC adaptive damping. The car's driver assistance systems include lane change assist and Travel Assist with Side Assist and Emergency Assist.

Granted, you don't buy a car like the Volkswagen Golf R to wow your friends with its environmental credentials, but it's hard not to be impressed with a combined fuel consumption of between 35.3mpg and 36.2mpg on the combined cycle. Likewise, emissions are also very good, registering between 177 and 181g/km. Insurance is group 31E. And the warranty? Well the standard package is three years and 60,000 miles. We can't see why Volkswagen couldn't extend that mileage limit to 100,000 miles, since that what you get on its mechanically very similar Caddy model. Doing that though, wouldn't give Volkswagen dealers so much of an opportunity to sell extended warranty packages. There's one for four years and 75,000 miles or, if you plan to see a bit more of the world in your Golf GTI, there's a five year / 90,000 mile package.

The Volkswagen Golf R might seem a bit of a conundrum. On the one hand, it's a four-wheel drive, 320PS, two-litre turbo road rocket; the sort of car that you thought had gone out of fashion. On the other, it's a wholly civilised, beautifully built family hatch that can better 35mpg and emits less carbon dioxide than many much slower hot hatches. That, more than its incredible performance figures, shows us how times have changed and how fast hatches have needed to rehabilitate themselves or die. Offering a strong value proposition and no shortage of capability, it's hard to see how this rejuvenated Volkswagen Golf R can fail. Can it match the polished capability of a BMW M135i or the vivacity and excitement delivered by the Renaultsport Megane or the Honda Civic Type R? That will very much depend on how you like your sports hatches but one thing's for sure. You've never had it so good.