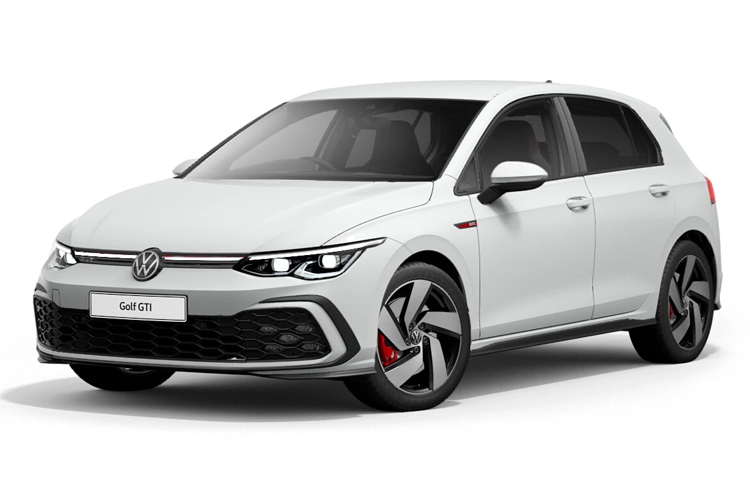 Before Volkswagen dreamed up the Golf GTI, there was no such thing as a 'hot hatchback'. Now the phrase has entered everyday parlance and virtually any manufacturer that has a hatchback also has a hot one - or a warm one at the very least. It was 1976 when the original version of this car was born and since then, through seven generations and with the help of countless imitators, it has brought performance, handling and fun to the masses on an unprecedented scale. The current Golf GTI is the mark eight and by rights, it should be the best yet.

The big news for enthusiasts is that this GTI now gets a bit more power. The latest 'EA888 EVO4' version of the Volkswagen Group's 2.0-litre TSI petrol turbo engine puts out 245PS with a gutsy 370Nm of torque. As usual, a 6-speed manual gearbox is standard, with a 7-speed DSG dual clutch paddleshift auto being optional. Select the DSG variant and 62mph from rest takes 6.2s en route to 155mph. As before, for diesel fans, Volkswagen still offers a 'GTD' version of this model which these days uses a 200PS 2.0 TDI black pump-fuelled unit. This eighth generation Golf GTI model's handling should feel a touch sharper thanks to a tweaked version of the previous model's multi-link rear suspension and a new driving dynamics control system known as the 'Vehicle Dynamics Manager'. This set-up controls both the XDS torque vectoring system (which helps get traction down at speed through tight turns). And if you've specified the optional DCC adaptive chassis control adaptive damping system, 'Vehicle Dynamics Manager' will proactively oversee that too. With DCC, the required damping is calculated for each wheel and adjusted at the four shock absorbers within fractions of a second. As usual, the DCC set-up has 'Comfort', 'Eco', 'Sport' and 'Individual' settings.

There's no doubt that this is a seriously good looking car these days. It sits on the same MQB platform as the last generation model but gets the lower, more menacing nose that's a feature of this eighth generation design. There's a single five-door hatch body style on offer. Unique 17-inch Richmond alloy wheels are standard (with 18 or 19-inch rims optional). There are wider black side skirts sills - and a splitter design similar to that found on racing cars. The dominant design element of the side section is the C-pillar, which as usual with a Golf visually propels the vehicle body forwards. Full-LED tail lights feature at the rear and the GTI lettering is now positioned centrally under the Volkswagen emblem. Inside, key detailing elements will be familiar to previous Golf GTI buyers - the golf ball-style manual gear knob, the tartan sports seats with black side bolsters, the sports steering wheel with three silver double spokes - all of this is present and correct. But this cabin's futuristic too, mainly thanks to the so-called 'Innovision Cockpit', which fuses a 10.25-inch digital instrument binnacle screen with a 10-inch centre-dash screen. Otherwise, things are much as with any other Golf, so you get great build quality, decent space for two adults on the rear bench and a class-competitive 380-litre boot.

You'll now need to think in terms of a budget getting on towards £35,000 or more for a Golf GTI, once you've specced it to your precise requirements. Once, that was the amount you'd have needed for the more potent Golf R, but things have moved on. Prices start at around £33,500 for the manual variant; you'll need another £1,500 more for the 7-speed DSG auto paddleshift version. To justify its asking price, this MK8 Golf GTI arrives with quite a portfolio of optional semi-autonomous driving tech, including a 'Travel Assist' feature that allows the car to accelerate, steer and brake on motorways at speeds of up to 130mph. Standard equipment includes a 10-inch centre-dash infotainment screen with an operating interface that responds to the command 'Hey Volkswagen', followed by whatever you want to ask. This is the segment's most interactive voice control system. Also standard are the full-LED headlights and the 10.25-inch 'Digital Cockpit' instrument binnacle screen. Volkswagen also says that this eighth generation model will be upgradeable, so if required, features like adaptive cruise control, light assist and a wi-fi hotspot can be added and enabled after you bought the car. Most owners will want to consider the option of adding DCC adaptive damping. The car's driver assistance systems include lane change assist and Travel Assist with Side Assist and Emergency Assist.

There's no mild hybrid tech offered on this MK8 GTI model's 2.0-litre turbo engine but Volkswagen still claims that efficiency has improved by around 10%. Let's get to the WLTP figures. In manual form, the car manages up to 38.2mpg on the combined cycle and up to 169g/km of CO2. As a DSG auto, the figures are exactly the same. If that's not enough for you, then switch your attention to the diesel-powered Golf GTD version of this model. That black pump-fuelled variant gets an AdBlue delivery system that cuts nitrogen oxide emissions by 80%. Whatever engine you select, the car's coasting function (available with DSG auto transmission) is always active helping with its efficiency figures. And the warranty? Well the standard package is three years and 60,000 miles. We can't see why Volkswagen couldn't extend that mileage limit to 100,000 miles, since that what you get on its mechanically very similar Caddy model. Doing that though, wouldn't give Volkswagen dealers so much of an opportunity to sell extended warranty packages. There's one for four years and 75,000 miles or, if you plan to see a bit more of the world in your Golf GTI, there's a five year / 90,000 mile package.

When the Golf GTI was first launched in 1976, Volkswagen wondered whether it would struggle to sell an early production run of 5,000 vehicles. Today, well over two million sales later, the issue is not whether this car will sell but who will buy it. After all, in recent generations, this model has mainly sold to folk who, if they were honest, would probably admit to having out-grown the shopping rocket genre it originally created. These people will really like this eighth generation car. It needed to return a little to its roots - add an old fashioned dose of fun into the mature mix. It has.

Made up with my new car. Ray answered all my questions straightaway and was very helpful Will definitely use again in the future.

Returning customer to Stable vehicle leasing, David Trulio is a credit to them and works hard to get you a good deal.