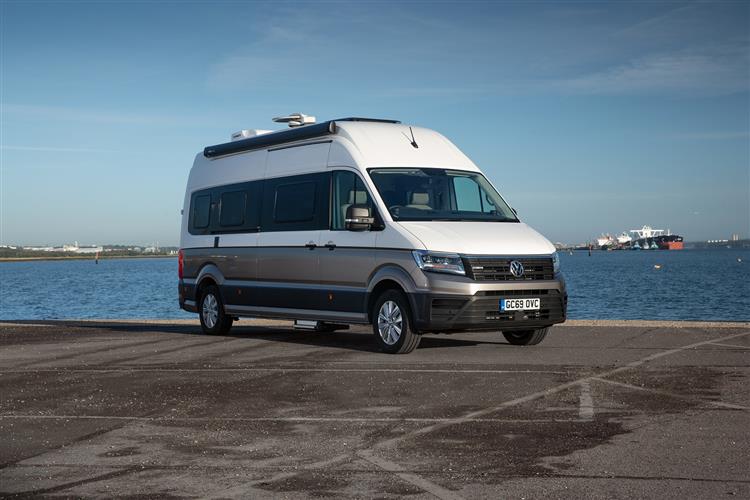 Here, Volkswagen has set itself the target of producing the ultimate motorhome. Jonathan Crouch tries the Grand California

By and large, motorhomes are built by companies that borrow van manufacturer engineering, then build luxury quarters around it. Or at least some of them do. Since 1988, Volkswagen has been offering the California, a four-berth motorhome based on the Transporter van, which in more recent years has been challenged by the Mercedes Marco Polo, a V-Class/Vito van-based contender of the same size. Many motorhome buyers though, want something larger than either of these models. And you'd certainly need something bigger if you wanted a proper bathroom in your motorhome, a feature that would give you real go-anywhere freedom in using a vehicle like this. That's what this model, the Volkswagen Grand California, provides. Launched in early 2020, it's only direct rivals come from motorhome companies basing a living structure on third-party large van - usually a Fiat Ducato or a Peugeot Boxer. Volkswagen reckons that designing and producing the complete vehicle itself produces a much more complete end product. Are they right? Let's find out.

Because of its sheer size, the Grand California is a more challenging thing to drive than Volkswagen's regular California model - and of course it's much heavier too, which is why the 2.0-litre TDI 177PS diesel engine that all variants of this model share takes nearly 16 seconds to reach 60mph from rest and longer still to get itself through the gears. Overtakes will need to be planned well in advance but once you're up to speed, the plump 410Nm torque figure keeps you there without undue bother. All derivatives use an 8-speed DSG automatic gearbox which changes sweetly through the ratios and facilitates quiet cruising. Body roll is actually pretty well kept in check for a vehicle of this size but of course you won't be wanting to throw any sort of motorhome about and the stability system here is programmed to make sure that you don't. On this '680' variant, there's the option of Volkswagen's 4MOTION four-wheel-drive system, which might be well worth having for slippery campsites or if you're venturing to rural destinations. The suspension set-up achieves a good balance of ride quality. And your view out and ahead is excellent thanks to the high seating position. Manoeuvring of course can be difficult with a motorhome this big; we think you'll certainly need the optional rear view camera. Bear in mind too, that to drive this Volkswagen, your driving licence will need a C1 rating allowing you to pilot something this heavy. If you passed your test after 1st January 1997, that might be a problem.

With the Grand California, Volkswagen has for the first time entered what the motorhome industry calls '6-metre' class and added in a bathroom to a vehicle of this kind. If you know the Wolfsburg brand's LCVs, you'll recognise from here at the front that it's based on the company's biggest van, the Crafter. Which means it's big - particularly in this '680' form, the figures designating a 6.8m length. There's also a slightly smaller '600' model measuring in at 6m for those with smaller driveways. That alternative '600' model offers the option of an upstairs sleeping area. A Grand California '680', in contrast, is very much based around luxury accommodation for just two folk. So, let's take a look inside the living area, access to which is gained by a large offside sliding door, below which a motorised step slides out to help you in. You immediately come across a two-person rear bench seat. At meal times, this can make up one half of a four-seat dining area when a table is inserted in front and the cab area chair swivelled round to face those at the rear. Heading backwards down the vehicle, there's a kitchenette on one side with two-burner cooker, work top, sink and refrigerator. And, on the other side, this Grand California model's most unique inclusion - a fully fitted-out wet room. The latter feature is crucial because it means that owners won't be tied to camping sites with toilet and shower facilities and therefore can roam more freely. The shower in this wet room draws water from a 110-litre on-board freshwater tank and drains it into a 90-litre waste tank. There are some lovely touches here which come with Volkswagen's ability to design and create the whole vehicle itself. Things like smart optional ambient lighting strips around the classy cupboard doors. And this wall-mounted tablet that allows you not only to adjust cabin heating and ventilation but also to deploy the optional roof-mounted satellite dish. You can choose to heat the cabin either using gas (the vehicle can store two big bottles of it) or electricity. The main bed is at the rear and is a comfortable size for a couple of adults - as you'd hope it would be in a vehicle this big. Bluetooth speakers around this bed allow someone at this end of the vehicle to listen to a different kind of music from that playing in the cab. If you do need to sleep more than two people, there's the option on the 600 model of an extra berth over the cab, which slides cleverly in and out and could be used by a couple of kids or small adult. As you'd expect, the front cab area is pretty much exactly as it would be in a well specified Crafter van and includes an 8-inch 'Discover Media' navigation system touchscreen incorporating the brand's 'App-Connect' smartphone-mirroring system, Bluetooth and a 4-speaker DAB audio system.

Let's try and guide you through the Grand California range. All models use a 2.0-litre TDI 177PS diesel mated to an 8-speed automatic gearbox. If you go for the shorter 6m-long '600' variant, there's a choice of two vehicle weights; either 3.5 tonnes (which at the time of this test in mid-2020 cost around £73,000); or a 3.88-tonne '600' variant costing around £600 more. For this test though, we chose the longer 6.8m '680' model, which is only available in 3.88-tonnes guise. '680' prices start at just over £75,000. For around £7,000 more, you can get a '680' derivative complete with the brand's 4MOTION four-wheel-drive system. As for options, well if you want to sleep more than two people in a Grand California, you'll need the smaller '600' model, which alone offers the £2,500 option of an over-cab bed with an access ladder. Most buyers will want an awning, available in either black or white; and probably also features like a roof-mounted satellite dish, a Wi-Fi LTE hotspot data server and a stationary air conditioning/roof air-conditioner. You can also add in a couple of extra windows in the vehicle's side panel, an auxiliary heater, solar panels, ambient lighting, toilet ventilation and a heating system for water and interior powered by mains electricity or diesel. You might also want a rear view camera, a heated windscreen, power-folding mirrors, a rear bicycle rack and a towbar. There are various optional 'Driver Assistance' packs which give you features like Lane Keeping Assist and a Blind Spot Monitor: and you can add in full-LED headlights with High Beam Assist stop. Side and curtain airbags also cost extra.

You might expect that you'd need deep pockets to run a vehicle this big and heavy. As it happens, you might be surprised. Let's take a look at the WLTP figures. The '600' series model can manage up to 24.8mpg on the combined cycle and up to 298g/km of CO2. This '680' front-driven variant can manage up to 24.6mpg and 301g/km of CO2. For the '680 4MOTION' variant, the top figure is 22.8mpg and up to 324g/km of CO2. A 3 year / 100,000 mile warranty is included - and it can be extended at extra cost. Volkswagen offers a range of insurance plans and also fixed priced servicing and a fixed cost maintenance programme.

When it comes to motorhomes, space is the ultimate luxury. And since this Grand California has so much of it, that's enough to make it feel very luxurious indeed. It's initially a bit shocking to find that a vehicle as big as this only sleeps two in standard form. But that's what the retiree market it's aimed at want - and on the 600 model, there is the chance to pay extra for an extra high bunk if owners want the option of bringing along the grandchildren. You have to know what you're buying here of course. This model won't be as easy to adapt to on the road as the brand's smaller Transporter-based standard California model. And of course it's much pricier to. If though, you want the most complete, most comprehensively engineered motorhome there is, this could very well be it.

Alex at Stable was recommended to me by a friend as he had dealt with him on a number of occasions previously and the service provided did not disappoint. Alex was very helpful and had an excellent knowledge with regards to vehicle options and helped me pick the best deal for me. He kept me up to date throughout with regards to my order and delivery times and was always on hand to help when I had any queries. Will definitely be using Stable again in the future and would recommend to anyone.

Dave was great and patiently tweaked quotes as I built the spec. The whole process was really easy from start to finish.

This is the 3rd car I have now leased through Stable Vehicle Contracts with Ray Hughes, and as before, the service was brilliant from start to finish, Ray was very friendly & supportive throughout the process and was always there to help, Lyndsey and Jade were very helpful also. I couldn’t be happier with the service I have received and I am delighted with the car. I would 100% recommend SVC and I’ll definitely be contacting Ray again for my next car.