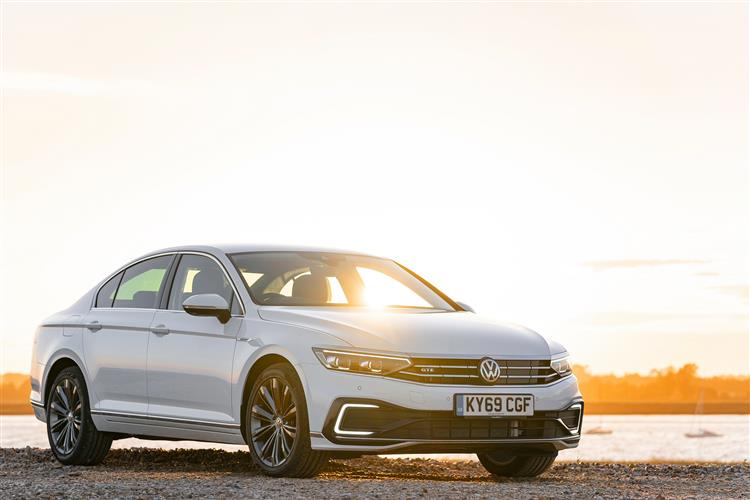 Volkswagen has updated the technology of its plug-in hybrid Passat GTE. Jonathan Crouch takes a look.

Over eight generations, the Volkswagen Passat has evolved from a slightly oddly-proportioned family car into today's handsome saloon or estate model that comes close to stepping on the toes of sister-brand, Audi. The GTE suffix was first used on the Golf plug-in hybrid and the technology was subsequently introduced into the Passat range, reducing emissions and improving fuel economy in a car that traditionally covers higher mileage. Plug-in hybrid technology will make a lot more sense for many buyers than conventional hybrid engines do. Keep the car charged up and if all you cover is a normal commuting distance, you could conceivably never have to fuel the car up at all. Yet, unlike a full-electric car, there's seamless transition to full engine technology for longer distances. This revised Passat GTE gets a bigger drive battery, 30% more zero-emissions range and some extra drive mode functionality.

Moving off from a standstill, the Passat always begins in silent electric mode. Once on the move (or when it's more prudent to save battery-life to use later on in the journey), e-Mode can be turned off and the 1.4-litre TSI petrol engine will take over. As the GTE drives in this setting, it will be recharging the battery pack and making full use of regenerative braking to top up the electricity on board. When the two power units are working together, they produce a combined 218PS, which allows the car to accelerate to 62mph in 7.6 seconds and on to a top speed of 140mph. The characteristics of an electric motor mean that the full power is available instantly, unlike in an internal combustion unit where the maximum output is only available when it reaches a certain engine speed. This can often have the effect of making a hybrid or electric car feel quicker than the figures suggest. The Passat GTE can achieve 81mph on electric mode, so there is no concern about travelling at motorway speeds, and in this revised model, the battery range has increased fto up to 36 miles under new-style WLTP rating. This improved design is also able to blend petrol and electric power more cleverly when you're using the car's more laid-back driver modes to emphasise real-world fuel economy. And it can use data from the navigation system to decide when to run the car on its electric motor, when to run it under petrol power, and how the two power sources should be combined to get you efficiently to your destination.

After seven generations of slightly quirky design, the eighth VW Passat emerged as a rather handsome, well proportioned automobile and has been improved in this revised form with full-LED head and tail lights that emphasise the car's width. The GTE variant is available not only as a saloon but also in an estate guise that gives this hybrid excellent load carrying ability and versatility. The exterior is thoroughly modern and gives this generation Passat a more prestigious appearance than its predecessor. A narrow blue line across the top of the grille identifies this as the plug-in hybrid model. A high-quality interior reinforces the grand touring purpose of the GTE, with comfortable ergonomic seats designed to reduce driver fatigue on longer journeys. Compared to the diesel models, the only compromise in space is down to the placement of the lithium-ion battery pack under the rear seats, which has resulted in the fuel tank taking up some hidden storage space in boot of the car. As in any normal Passat, the dashboard features a big central screen (in this revised car, it's VW's third generation 'MIB' touchscreen infotainment system). In the case of the GTE, this display has a range of other eco-minded functions. Through the steering wheel, you can specify a set of optional digital 'virtual' dials. The seats, as in most Volkswagens, initially feel unyielding but are supremely comfortable over longer distances. Three adults can fit in the back too.

There's inevitably a premium to pay for this GTE over, say, a top Passat diesel and these days, there's no helpful government Plug-in car grant to soften the blow. Nevertheless, Volkswagen still thinks this GTE variant will account for around 25% of Passat sales. That's despite the fact that you'll need to approach purchase with a budget of around £36,500 in mind. That's for the standard saloon variant; you'll need another £1,500 for the Estate derivative. There are standard and 'advance' trim levels. The GTE comes with 'Car-Net Guide & Inform', a system that delivers information such as traffic, petrol prices, and free parking, to the navigation screen through a range of apps. Many of these apps can be controlled via your smartphone. Car-Net e-Remote allows you to monitor the charge of your GTE battery, and can help direct you to your Passat if you've returned to a busy car park without remembering where exactly you had parked. Other equipment includes a blue-stitched, leather-trimmed three-spoke multi-function steering wheel, stainless steel pedals, 2Zone climate control and a 'Composition Media' infotainment system with a 6.5-inch touchscreen display. This offers access to Bluetooth telephony, the usual informational functions, SD card and USB connectivity and a DAB tuner as part of an eight-speaker stereo system.

First the headlines. Volkswagen claims an unlikely-sounding 217.9mpg WLTP combined cycle fuel figure for this car, along with a squeaky-clean 29g/km of WLTP-rated CO2. Plus under the WLTP cycle, it's now supposed to be able to travel on full-electric power for up to 36 miles when fully-charged. In other words, if the vehicle is only used for short commutes and re-charged regularly overnight, it is conceivable that this GTE can be run entirely on off-peak electricity, costing pennies rather than pounds to consume. The combined range of the petrol and electric motor is around 660 miles, making it an ideal comfortable car for longer journeys. The extent to which you can charge this car up from the mains is also obviously going to make quite a difference to your overall running costs. Doing so inevitably takes a lot less time than it would in a comparable full-electric car - say something like a Nissan Leaf. That's because the batteries of a Plug-in hybrid car like this one are much smaller. Powering this Volkswagen up from a domestic socket would take four hours and fifteen minutes, but most owners will want to find an extra couple of hundred pounds to install a Wallbox charger in their garages. Use such a wallbox - or indeed plug in to one of the many public charging points springing up around the country - and you'll be able to reduce your charging time period from empty to just two hours and thirty minutes.

This Passat GTE will make a lot of sense for the right kind of buyer, scoring in the way that it makes something so complicated so universally acceptable. There's no weird bodywork. No confusing digital read-outs. No odd driving technique to master. Here, you simply get a Passat very much as you might have always known it. Just one with a little extra to offer. Yes, differences come with the plug-in hybrid technology, but as a driver, you're not forced to embrace them. Indeed, drive this car in full-engine mode and you could conceivably fail to notice anything out of the ordinary about it at all. Everything's so straightforward - so normal. Just leave the thing in its 'Hybrid Auto' setting and you'll get diesel-like fuel economy with a real surging turn of pace when you need it. Even if you never once plugged this car in, you'd probably be perfectly happy with what you had. It's all deceptively unique. It's all a taste of the future - but in a car very much for today.