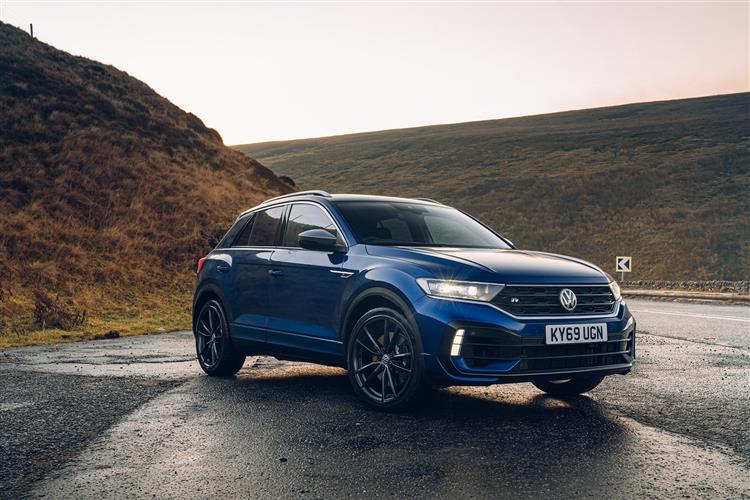 When the Golf R first arrived back in 2009, we imagined it might pave the way to a whole series of 'R'-branded fast Volkswagens. In the event, it took a decade for the 'R' range to be expanded beyond the Golf line-up - with this car, the T-Roc R. Where once, Volkswagen would have added the R performance tinsel to conventional models like the Polo or the Passat, it says much for the current state of the market that beyond the Golf range (and possibly the ID.3 EV), it's limiting the tuning scope of Jost Capito's R tuning division to its SUVs. A Touareg R can be had if you have to buy the fastest Volkswagen SUV possible. In the real world though, this T-Roc R would probably be quicker point-to-point. But how close can it get to replicating the Golf R experience?

Volkswagen R boss Jost Capito and his team started off with the usual Wolfsburg recipe for compact performance models. Namely, the award-winning EA888 version of the 2.0-litre TSI petrol turbo engine in 300PS form. Plus 4MOTION 4WD and a DSG 7-speed paddleshift auto gearbox. Pretty much what you'll find in a Golf R. And exactly as you'll find it with this car's two Volkswagen Group cousins, the Audi SQ 2 and the CUPRA Ateca. Or perhaps not quite exactly. Capito's engineers had to put quite a lot of specific effort in to make this formula really work for the T-Roc. An aluminium subframe (borrowed from the old Golf GTI) has been fitted at the front for lower weight and extra stiffness. There's a 20mm drop in ride height over a standard T-Roc and the springs are 20% stiffer. The brakes are borrowed from the old Golf GTI Performance Pack model, with bigger pads. And there are shorter gear ratios and specific damping settings, plus the option of Dynamic Chassis Control adaptive damping (which you can't have on an Audi SQ 2 and which is really a must-have addition if you're to be able to experience everything the dynamics of this car can offer). A fatter rear spoiler improves downforce at high speed. And there's a standard Drive Mode system with a rorty 'Race' setting, which really comes alive if you pay a ludicrous amount extra for the throaty Akrapovic exhaust. 62mph from rest takes just 4.8 seconds en route to an actual (not limited) top speed of 155mph.

Volkswagen has done its best to make this T-Roc R stand out from its humbler showroom stablemates. The front gets a more distinctive radiator grille bearing the 'R' logo and in place of the usual front fog lights, LED daytime running lights are set into the front bumper. From the side, you might notice that widened wheel arches surround the 19-inch 'Pretoria' alloy wheels and complement the black brake callipers complete with 'R' logo. There's also matt-chrome effect covers for the door mirrors and lowered 'R' sports suspension. The rear gains a black diffuser with twin chrome exhaust tailpipes left and right. Inside, the cabin features a smattering of 'R' logos - on the door sill protectors, front seat backrests and leather trimmed multifunction sports steering wheel. Plus there's ambient lighting, 'Gloss Black' decor, stainless steel pedals and grey contrast stitching for the carpet mats. Otherwise, it's much as in any other T-Roc, which means there's rather too much hard plastic trimming about for a car of this price. As in the standard model, there's comfortable space for a couple of adults on the back seat (though it'd be a squash for three). And there's a decent-sized boot measuring 445-litres when loaded up to the top of the second row seat backrests. Fold the rear bench and 1,290-litres of space can be freed up.

The T-Roc R costs around £39,000 and comes only with a DSG 7-speed auto gearbox and only in fixed top form (the idea of a T-Roc R Cabriolet is interesting but Volkswagen says there are no plans for such a thing). The key extras here lie with adaptive damping (pretty important to have) and the optional Akrapovic exhaust (a cool £3,000 more but gloriously sonorous). To give you some perspective on the pricing here, the next sporty T-Roc model down in the range, the R-Line 2.0 TSI 4MOTION variant with 190PS and the same auto DSG 'box, costs around £35,500. So for this top 'R' variant, you're paying around £3,500 for the extra power, a bit more chassis tuning, some extra equipment and a few additional sporty bits. That's a similar pricing position to this model's identically-engineered VW Group sporty compact SUV cousins, the Audi SQ2 and the CUPRA Ateca. That's a significant outlay, so you'll be expecting plenty to come as standard, in which case you shouldn't be disappointed. We've talked about the outward embellishments in our 'Design & Build' section, so we'll focus here on the interior niceties. You might expect full-leather upholstery for this kind of money but instead, the front sports seats are trimmed in 'Race' cloth, though they do get embroidered 'R' branding - which also features on the three-spoke multi-function steering wheel. There's also a powered tailgate and a 10.3-inch Active Info Display digital instrument cluster, which works in conjunction with an 8.0-inch Discover Navigation centre-dash infotainment screen. These two monitors combine to create a digital and interactive cockpit with a wide range of online services and apps accessible via smartphone and the usual 'Volkswagen Car-Net' media connectivity system.

As you'd expect, the T-Roc R is class-competitive in terms of running costs. WLTP CO2 emissions are rated at 197g/km and the WLTP combined cycle fuel consumption is rated at 32.5mpg. For comparison, a T-Roc R-Line 2.0 TSI 4MOTION 190PS DSG model puts out 186g/km and manages up to 34.4mpg. The BIK tax rating is up at 37%. As for servicing, well as usual with Volkswagen models, there's a choice of either 'Fixed' or 'Flexible' maintenance packages. You'll choose the 'Fixed' approach if you cover less than 10,000 miles a year and with this, the car will typically be looked at every twelve months. If your daily commute is more than 25 miles and your T-Roc will regularly be driven on longer distance journeys, you'll be able to work with a 'Flexible' regime that can see you travelling up to 18,000 miles between garage visits - or every two years, whichever is sooner. And warranties? Well the standard package is three years and 60,000 miles.

Of the three Volkswagen Group compact SUVs that share this car's 2.0-litre turbo 300PS 4MOTION formula, this T-Roc R seems at first glance the most credible option. The CUPRA Ateca feels a bit contrived, and the Audi SQ 2 can't be had with the crucial option of adaptive damping. Plus this Volkswagen seems more thoroughly engineered by a team who've managed to get closer than expected to replicating the exemplary drive dynamics of this model's Golf R cousin. They haven't quite managed it of course - an SUV is never going to be quite as agile or as confidence-inspiring as a conventional hatch. But there are compensations of extra practicality and if you stretch to the optional Akrapovic exhaust, you'll at least feel more dynamic. It's all about perception you see. The people who created this car understand that.