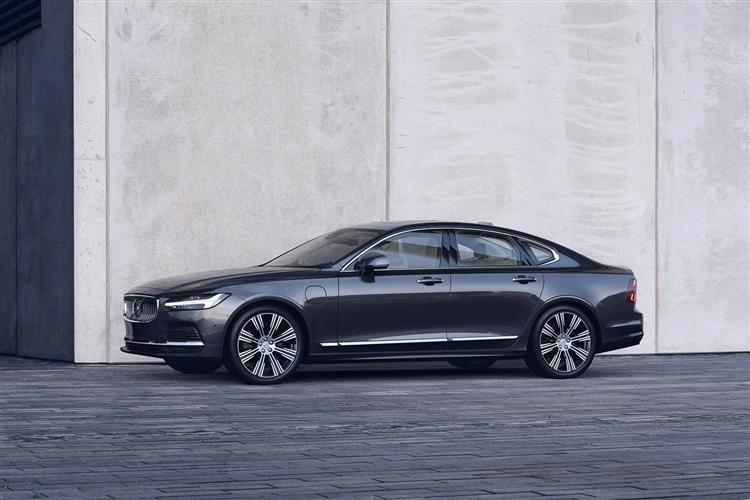 If you're thinking of buying a full-sized executive car, then you're probably thinking of a BMW 5 Series, an Audi A6 or a Mercedes E-Class. Other brands have tried and failed to upset German dominance in this segment, Volvo being one of them. The Swedish maker's old S80 never managed to make much of an impact here - but then that was a car from a different era of Volvo ownership. These days, the Gothenburg marque has huge Chinese investment to drive it forward and the result is a much stronger range of product - cars in fact like this one. Volvo itself reckons that this improved S90 (and its V90 estate counterpart) represent even more of a step forward than the second generation XC90 SUV did - and that car was a seismic step forward for the company. The prospects then, are promising.

Because this S90 uses the same 'Scalable Product Architecture' as its XC90 SUV stablemate, it also uses many of the same engines too, which are virtually all now based around the brand's mild hybrid technology. There's a choice of B4, B5 and B6 petrol units respectively developing 190, 250 and 310hp. And B4 and B5 diesels, respectively developing either 197 or 235hp. Plus, as usual with Volvo, there's also a T8 plug-in hybrid version, offering a 303hp output plus an 87hp electric boost. All the engines, as usual with the brand, are 2.0-litres and four cylinders in size. As before, all S90s will be ordered with smooth 8-speed auto transmission. On the move, you aren't served up anything that encourages much driving involvement -blame the rather vague steering for that - but in compensation, there's unruffled poise and exemplary refinement. You get supple standards of ride comfort from the soft suspension too and there's the option of rear air suspension if you want it. A standard 'Drive Mode Settings' driving dynamics system allows you to tailor throttle response, steering feel and auto gearshift timings to suit the way you want to drive. And if you do push on a bit, grip and traction are actually quite impressive and cornering bodyroll decently well controlled.

Visual updates here are minor - new fog lights, a fresh spoiler design and a new lower front bumper. Otherwise, the look of this car is as before. This remains the most credible full-sized executive saloon Volvo has brought us to date. The S90 has a proud yet non-aggressive face, characterised by a concave grille - apparently a homage to the Volvo P1800 - that's home to the brand's distinctive 'Iron Mark' logo. The T-shaped 'Thor's Hammer' lights are recognisable from the XC90 and deliver a powerful sense of direction that makes this car unmistakable on the road. Step inside an S90 and if you've previously tried the brand's second generation XC90 model, it'll all be pretty familiar, though a difference lies with smart air blades that stand vertically on each side of the Sensus user interface. This massive tablet-like touch screen control plays a key role in creating an interior that is modern, spacious and uncluttered. Changes made to this updated model are minor. You can now specify seats with an exclusive tailored wool blend, there's an improved version of the premium Bowers & Wilkins surround sound system and there are now double USB-C charging points in the rear. The 500-litre boot is huge but if that's not enough, then the brand also offers a spacious V90 estate version of this design.

Prices sit in the £40,000 to £60,000 bracket, as you'd expect from a car in this class aiming to go up alongside full-sized executive segment rivals like BMW's 5 Series, Audi's A6, Mercedes latest E-Class and Jaguar's XF. There are the usual 'Momentum', 'R-Design' and 'Inscription' trim levels. And recent spec changes include the introduction of a more advanced interior air-filtration system, wider availability of wireless charging and the wider provision of leather-free interiors for top models. Top models can be ordered with features like 21-inch alloy wheels and powered, heated and ventilated seats trimmed in Nappa leather. Inside, the tablet-like touch screen in the centre console drives the minor controls and a whole host of Internet-based products and services. Audio services in the plushest variants come courtesy of a monster Bowers & Wilkins stereo. The electronically controlled air suspension has choice of five modes, including one where the driver is free to tailor the settings to his or her personal taste. S90 safety gear includes a run off-road protection package which tightens seatbelts and activates energy-absorbing technology in the seats when the car detects challenging terrain ahead. Another system is the auto-braking feature, which cuts in if a driver pulls out in front of oncoming traffic. Plus the S90 also features a large animal detection set-up capable of detecting large animals such as elk, horses or moose, night or day.

With the B5 diesel most S90 buyers will choose, expect around 45mpg on the WLTP combined cycle and well under 150g/km of CO2. Inevitably, these figures take a tumble in the more powerful B5 petrol variant; there, you're looking at around 35mpg and around 155g/km. If you want to do significantly better in a petrol S90, you'll need to look at the top T8 Twin Engine petrol plug-in hybrid model, which delivers around 50g/km of CO2 and up to 26 miles of pure electric driving range. What else? Residual values? They're key in this segment of course and you'd expect those of a big, relatively expensive Volvo luxury saloon to lag severely behind the kind of figures you could realise in a rival BMW or Mercedes. You'd be wrong though. The S90 is selling here in very restricted numbers and that, along with this model's many other attributes, has turned around Volvo's performance in the Executive sector when it comes to depreciation. To the point where independent experts reckon that after owning a typical B4 model for the usual three year/60,000 mile ownership period, you'd get between 39 and 41% of your original purchase price back, depending in the trim level chosen. That's pretty close to the kind of return you'd get from a rival Mercedes E-Class.

In this S90, Volvo has a properly credible and very charismatic flagship saloon that will complement the discernment of the relatively few business buyers likely to choose it. Inside, there's properly distinctive luxury, rather than merely the kind of upgrade from a smaller, cheaper model that rivals offer. Sure, not everyone will like it. But then there won't be enough S90s imported to satisfy everyone anyway. Those who do choose this car can justify their decision not only on the basis of wanting something different but also through a range of more foundational attributes. Things like strong residuals, much higher levels of standard equipment and class-leading safety. We like the fact that the pokier version gives you AWD yet is still cheaper to run than its six cylinder 2WD rivals. And if you can afford the top T8 Plug-in hybrid variant, you'll get yourself a unique blend of performance and efficiency. It's all quite unexpected. From a car that may well make you rather like the unexpected.