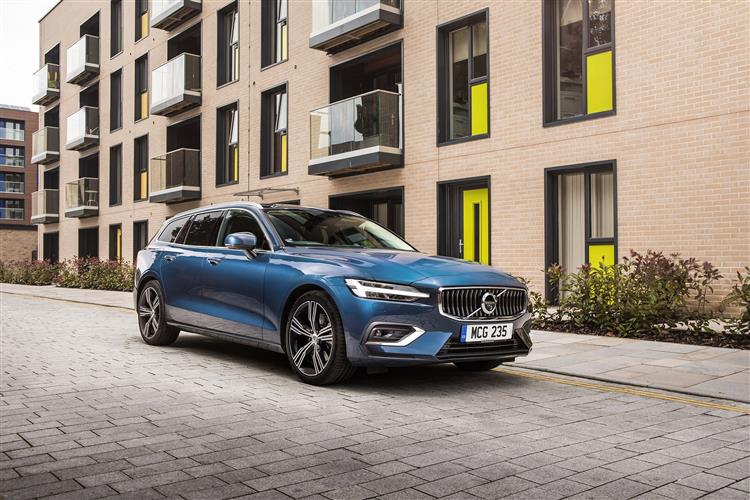 The second generation V60 aims to reinterpret the whole idea of what a mid-sized Volvo estate car should be. Jonathan Crouch looks at the B4 mild hybrid diesel version.

Estate cars used to be things you bought to carry around loads of kit. Not any more. These days, most people wanting to do that will buy an MPV or an SUV. Leaving estates to focus almost completely on style and driving dynamics. Which is why compact mid-sized premium-branded wagons like Audi's A4 Avant and Mercedes' C-Class Estate can't actually carry much more than the saloons upon which they're based. Now you wouldn't expect Volvo, a solid, traditional brand that pioneered the kind of boxy estate car into which you could fit a fridge (or several), to want much to do with this kind of trendy form over function approach. But you'd be wrong. The Swedish brand actually invented this style-conscious market niche long before the German brands turned up, bringing us the classic P1800E model that Roger Moore drove as 'The Saint' way back in the Sixties. But it took them until 2010 to return to it with the first generation version of their V60 model. That car wasn't quite good enough to significantly trouble its dominant German-branded rivals. But this design, its successor, might well be. Especially in this B4 mild hybrid diesel form.

You might not be approaching the idea of driving a Volvo estate with much enthusiasm, but this second generation V60 is actually surprisingly agile and adept, thanks in large part to its stiff 'SPA' platform architecture. It doesn't handle quite as sharply as some rivals because it has other, arguably more important priorities. And recognises that for some, driving enjoyment can also come with a lowering, rather than a raising, of the heartbeat. The well-judged set-up of the standard 'Dynamic Chassis' suspension set-up helps here, which provides the best balance of any Volvo we've yet tried when it comes to the contrary objectives of comfort and composed body control. The optional 'Active Four-C Chassis' package gives you adaptive damping, but you don't really need it. All variants get Volvo's usual 'Drive Mode Settings' driving dynamics system via which you can tailor throttle response, steering feel and the timings of the optional 8-speed auto gearbox to suit the way you want to drive. As for engines, well as usual with Volvo these days, they're all four cylinders and 2.0-litres in size. The company's future plans for its conventional powerplants are centred around 48-valve mild hybrid technology, which features in this 197hp B4 - a model offering a 420Nm torque output facilitating a 2.0-tonned braking towing capacity and allowing this variant to reach 62mph in 7.9s - a time that's actually slightly quicker than a rival BMW 320d. On the way to a limited top speed of 112mph

Lots of people will have a clear picture in their head of what a Volvo estate looks like. This might not be it. Along with its S60 saloon stablemate, this MK2 model V60 is the smallest and lightest of the cars produced from Volvo's 'SPA' 'Scalable Product Architecture' platform. It's appropriate then, that there's a sense of visual agility here that the brand's other more expensive offerings don't have. Take a seat up-front, where high-quality materials, intelligent use of space and attention to detail work together to create a distinctly Scandinavian cabin that's simple, elegant and more appealing than most rivals. The first thing you'll probably notice is the 9.3-inch portrait-style touchscreen on the centre console that de-clutters the cabin of buttons and gives it a classy, sophisticated air emphasised by intricate detailing and rich Scandinavian design. There's more technology in the instrument binnacle where the normal conventional dials and read-outs have been replaced by virtual ones in an 'Active TFT Crystal Driver's Information Display'. Out back, boot space comes in at 529-litres with the rear seats in place, outstripping the Audi A4 Avant, BMW 3 Series Touring and the Mercedes C-Class Estate. The rear bench splits 40/20/40 and drops down flat to the floor.

The first generation V60 model merely aspired to be a direct rival for mid-sized premium station wagon segment leaders like Audi's A4 Avant, BMW's 3 Series Touring and the Mercedes C-Class Estate. This second generation version though, feels confident that it can take on and beat these Teutonic heavyweights - and it's been priced accordingly. Where before, most V60s were sold below the £30,000 price point, with this MK2 model, the mainstream models that will make up the majority of sales are pitched in the £35,000 to £40,000 bracket. Across the mainstream variants, there are three core trim levels - 'Momentum', 'R-Design' and 'Inscription'. This B4 diesel variant is tightly priced by class standards. From launch, Volvo attached a £38,000 starting price to this variant; directly equivalent BMW 320d Touring and Audi A4 Avant 2.0 TDI 190PS models cost a similar amount. Safety standards are class-leading. The City Safety with Autobrake technology system uses automatic braking and detection systems to assist the driver in avoiding potential collisions, and is the only system on the market to recognise pedestrians, cyclists and large animals. In a world first, City Safety now also engages auto braking to mitigate oncoming collisions. The purchase options are innovative too. In certain areas of the country, customers who want an alternative to outright purchase, leasing, contract hire or finance schemes will be offered the opportunity to acquire a V60 using the new 'Care by Volvo' scheme. Here, there's no deposit required and you'll get a two year agreement that also includes use of another Volvo model for up to two weeks a year.

Let's look at the WLTP efficiency stats. This 197hp B4 mild hybrid diesel variant, the V60 version most will choose offers combined fuel consumption of up to 55.3mpg on the combined cycle and CO2 emissions of up to 135g/km. By way of comparison, the petrol-powered B3, B4 and B5 mild hybrid models offer combined fuel economy of up to 40.9mpg and CO2 emissions of up to 157g/km. The Recharge T6 AWD petrol/electric plug-in hybrid manages up to 156.7mpg and up to 41g/km and will offer an all-electric driving range of up to 36.7 miles. Ultimately of course, we can talk about figures all day but the ultimate cleanliness and frugality of any car has as much to do with the driver as with the automotive engineer. Here, the figures quoted assume that the car is being operated in the most frugally-orientated of the available drive modes - 'Eco' - a setting that gives you a green-tinged gauge you can use to regulate throttle application. Maintenance should also be relatively affordable for a car of this kind, with intervals every year or 18,000 miles. Three or five year pre-paid servicing packages are available to help you budget ahead. With the useful 'Volvo On Call App' remote connectivity system, this V60 can be programmed to autonomously realise when a service is due, then automatically book it for you at a dealership of your choice. Finally, we'll tell you that the warranty is the usual three year, 60,000 mile package.

Volvo estates aren't what they used to be - and in this case, that's a very good thing. This second generation V60 will, we think, find it easier than its predecessor to conquest sales from German rivals. Class-leading safety gives this Swedish contender a tangible advantage over such competitors. So does this V60's high-tech cabin with its more sophisticated infotainment and instrument binnacle screens. You get generally more complete levels of standard equipment too. Of course, as with any premium-badged mid-sized estate, what's on offer here isn't cheap, especially not in this B4 diesel form. But those strong safety standards will help potential buyers feel better about that. We're reminded of the ads the brand ran for its estates back in the Seventies that showed a family of cub scouts clambering inside. 'It's not expensive when you consider what goes into it' was the tag line. Precisely. This V60 might even appeal over a fashionable mid-sized SUV - which wasn't what we expected at the outset. In summary, this could only be a Volvo, but it also offers a slightly different vision of what a family estate car ought to be. We like it for that. You might too.