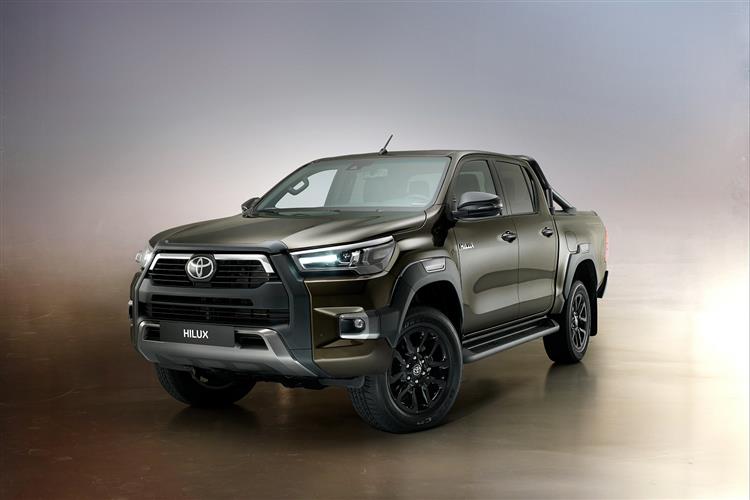 You know what you're getting with Toyota's Hilux: a pick-up that'll take whatever you can throw at it. The brand launched a smarter, more sophisticated eighth generation in 2016 to do that with a bit more style, an extra dose of hi-tech and a more refined roadgoing demeanour. But don't worry: it's as tough as ever.

Think of a pick-up and it's quite likely that you'll be picturing a Toyota Hilux. This model has, after all, been a dominant presence in the global pick-up market for around half a century. Around 18 million examples of this truck have been produced in that time and most of them are still pounding the roads and unmade tracks of the 172 countries across the world where this model is sold. This eighth generation version arrived in 2017. In its lifetime, the Hilux model line has faced and overcome many significant challenges. This is, after all, the vehicle Jeremy Clarkson and Top Gear drowned, threw from the top of a tower block and still drove home. It was the first vehicle to be driven to both North and South Poles. It's conquered the Antarctic, the slopes of live volcanoes and the gruelling Paris-Dakar rally. It is, in short, for everyone from suburban builders to Libyan freedom fighters, a pick-up trusted the world over to get the job done, which is why it's still Europe's best selling model in this segment. Toyota never worried about the ability of this model to do any of these things, but back in 2017, the company was becoming concerned as brand after brand has piled into the pick-up segment, this class having widened beyond jobbing builders and farmers into the profitable lifestyle SUV sector. Previously, it had never much mattered if this Toyota was clunky to drive, inefficient to run or utilitarian inside: by 2017 though, it did. Somewhat belatedly, the Japanese maker realised that the Hilux could no longer be merely a commercial vehicle with a few plusher variants to tempt in wealthier folk. This eighth generation version needed to be, in the company's own words, 'a pick-up for a new era'. The obvious way for Hiroki Nakajima's design team to interpret this shift of emphasis would have been to make this model more 'car-like'. But that would have diluted the tough, durable virtues that loyal buyers love so much. In any case, the brief with this MK8 version was more evolutionary than revolutionary, with development priorities based around the need for greater carriage capacity, a higher towing limit and even greater off road capability. These are objectives that you might think would be unlikely to lead to a more refined, efficient and comfortable everyday tarmac driving tool, but that's exactly what Toyota's claimed this eighth generation Hilux to be, with its freshly developed 2.4-litre D-4D diesel engine, its stiffer ladder chassis and its revised suspension set-up. This MK8 model sold in this initial form until mid-2020 and it's these 2016-2020-era models we look at here from a used perspective. This MK8 model was significantly updated from late 2020 onwards.

Some pick-ups look a little silly when they're all chromed up, but we think that this one assumes just the right balance of style and solidity, especially in Double Cab guise, a body style that of course far out-sold the alternative 'Single Cab' and 'Extra Cab' variants. There's something about climbing aboard a Hilux that makes you come over all Crocodile Dundee. As with all the toughest pick-ups, you perch up high, bearing down on ordinary road users with authority and in this MK8 model, you sit more comfortably on redesigned seats that are much more supportive than those of the old seventh generation Hilux. Welcome cabin improvements over the previous design include a sophisticated 'Toyota Touch 2' centre dash infotainment screen, the 4.2-inch TFT multi-information display on the dash and the fact that the thicker steering wheel was for this era able to adjust for reach as well as rake. The rear seat retained a useful 60:40-split tip-up function so that valuable things like tools can be kept away from prying eyes. As for actually sitting in the back, well no Double Cab pick-up offers rear-seated passengers a really luxurious travelling experience, but this one certainly improved itself in this regard. It helps that the seats were redesigned to give more thigh and back support, plus the centre transmission tunnel is relatively low and thinner front seat backs free up more space for your knees. If there are only two of you, you can use the provided fold-down centre armrest with its integrated cupholders. Time to focus on cargo bay practicality - and the main thing you need to know here is that this MK8 model provided more of it. The revised design of the eighth generation model makes it easier to get to the loading area, thanks to a revised steel bumper that was set lower to the ground, allowing for a deep step to be fitted. As for the bay itself, well it's class-leadingly wide, with maximum deck width having been increased from 1,544mm in the previous model to 1,645mm in this one. As for the weight you can carry, well in 'Active' guise, the Double Cab can take a payload of up to 1,055kgs.

This is a vehicle that might well have been seriously used off road, so check underneath for signs of damage. Also, make sure any thick mud has been washed off the chassis; otherwise it will trap moisture that'll cause corrosion. Check that the spare tyre security lock is still fitted on it, otherwise, you're asking for opportunist theft. Check all the exterior panel for damage or poor quality repairs. This is, after all, a 5.3m long vehicle and most models were supplied without all round parking sensors. Because of the high sidewalls of the tyres, the alloy wheels should remain undamaged from kerb scrapes, but jagged rocks encountered while driving off road may have cut into the rubber. These cuts might look insignificant, but they increase the risk of a blow out at high speed. If the Hilux you're looking at has only been used on shorter trips, there may be an issue with its Diesel Particulate Filter blocking up. There is a specific button you can press to regenerate the DPF to help prevent this, but taking prolonged drives at faster speeds is a better option. Using it injects extra fuel into the exhaust stream to increase the temperature in the filter, burning off the trapped soot. But that further worsens the rather mediocre fuel consumption you'll get from the 80-litre fuel tank.

Many of today's pick-up customers want an LCV like this for daily tarmac use: some even now want it to function as their only means of transport. As a result, Toyota knew that this MK8 model Hilux had to become more car-like in its feel on tarmac, yet manage that without compromising the previous model's core values of tough, go-anywhere capability. Did they manage that? Well the redesigned suspension was still leaf-sprung, so it can't match the ride quality of Nissan's rival coil-spring Navara. It was a big improvement though and previous Hilux buyers will note the smoother way that the MK8 version of this pick-up handles secondary route tarmac undulations, something aided by a clever 'Pitch and Bounce Control' system that automatically adjusts engine torque to suit the road surface. Sharper, more accurate steering helps too, plus improved engine refinement makes highway trips less of a chore. Ah yes, the engine. It's a 148bhp 2.4-litre D-4D diesel that was freshly developed for this MK8 model and puts out a prodigious 400Nm of torque, enough to deliver the uprated 3.5-tonne towing capacity that front runners in this segment offer. This powerplant features all kinds of developments aimed at improving efficiency, but the benefits these enhancements deliver are to a great extent masked by the extra weight this MK8 model had to carry around thanks in part to a tougher ladder-frame chassis that was 20% more rigid than the previous model's platform. The 6-speed manual version of the Double Cab variant was claimed to be able to return 40.4mpg on the combined cycle and 185g/km of CO2 (both NEDC figures). Go for a model fitted with the 6-speed auto gearbox and those figures fall to 36.2mpg and 204g/km.

You can see why used pick-up sales continue to rise. They're practical, quite tax efficient and more car-like than ever before. Too car-like perhaps? If you're worried on that score, then this MK8 Hilux will suit you perfectly. The eighth generation changes made this Toyota a slightly more practical day-to-day tarmac tool, but never far below the surface is the rugged toughness that has taken this vehicle to the furthest and most inhospitable parts of the Globe. Ultimately though, this remains one of our preferred options in the pick-up segment from the 2016-2020 era - and we're not alone. From Alaska to the Sahara to the Australian Outback, this is the vehicle of choice for people who need to get the job done. Drive one and you'll see why.

Ray Hughes was amazing . Always answered the phone when I needed information or to ask a question . Made my leasing procedure go through very smoothly and with ease .