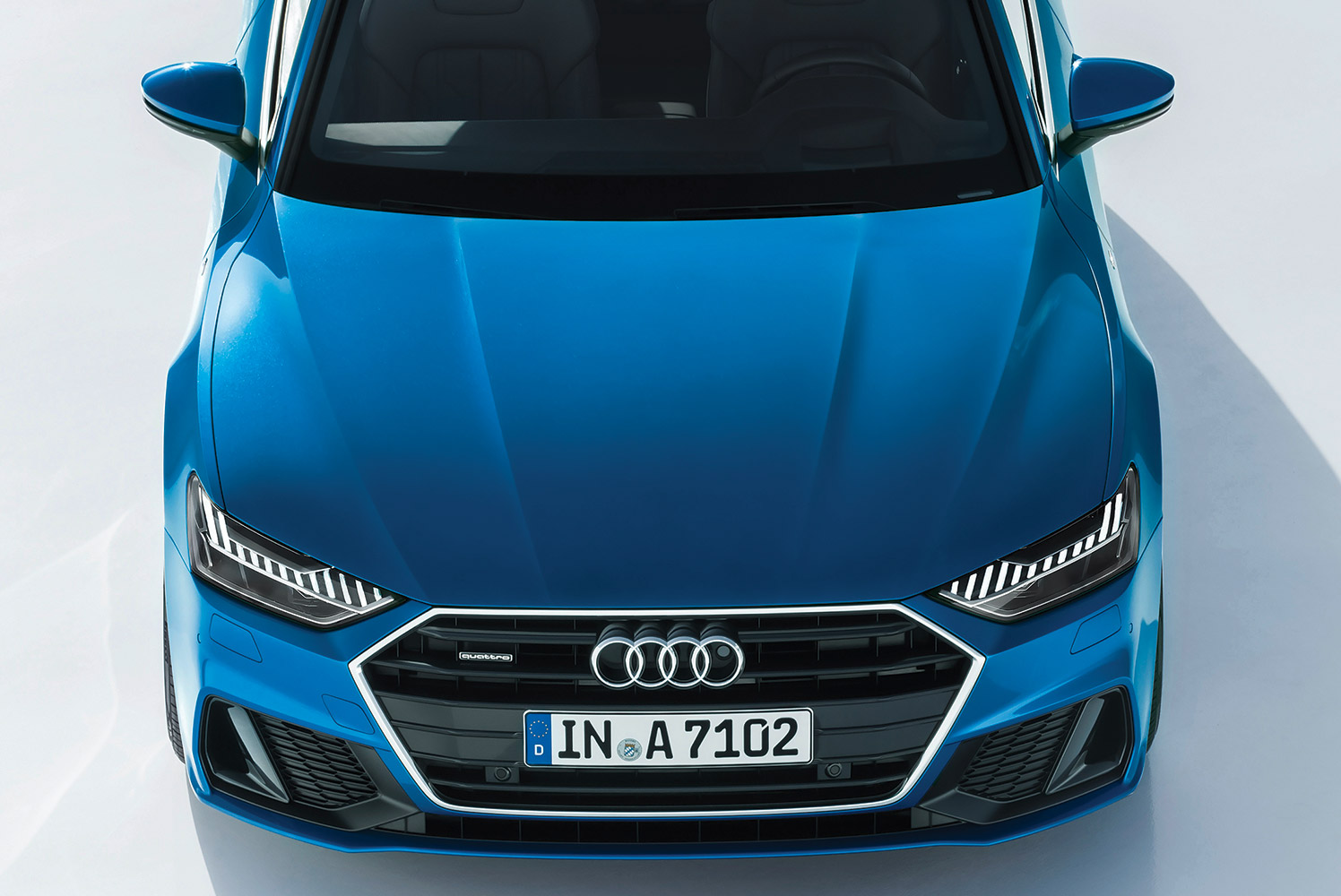 The new, fully redesigned, Audi A7 Sportback is here, and it's even better than we imagined! Now with mild hybrid technology.

The new, fully redesigned, Audi A7 Sportback is here, and it's even better than we imagined! Now with mild hybrid technology.

[/vc_column_text][vc_column_text]The Audi A7 Sportback sets new standards in the luxury class thanks to a sleek new design, straight out of an updated Audi design language handbook, a sporty driving experience, minimal interior and versatile space concept. The exterior design is an expression of the new design language that Audi introduced with the new Audi A8 - large surfaces, sharp edges, athletic lines complemented by narrow headlights, bold air inlets and a flat front end that perfectly emphasise the wide, low body. The long engine hood, long wheelbase and short overhangs gave us a feeling of luxuriousness that we didn't get from the A8. We feel that there's something genuinely more striking about this new design, as a four-door coupe, especially the S line variant. The silhouette of the car is defined by the dynamic roofline, which drops sharply towards the rear.[/vc_column_text][vc_single_image image="5326" img_size="full"][vc_column_text]The lights are beautiful on this model. The headlights, if you opt for top spec A7 Sportback, are HD Matrix LED headlights with Audi laser light and are made up of 12 adjacent lighting segments that are separated by narrow spaces. The rear lights are made up of 13 vertical segments and a flat light strip. When the doors are locked, or unlocked, fast-moving light animations play in the rear lights and the headlights. Audi hopes that these animations will highlight the dynamics of the large car while standing still. [/vc_column_text][vc_column_text]

"The Audi A7 Sportback has a new futuristic lounge atmosphere."

[/vc_column_text][vc_column_text]The paint range on the new A7 Sportback will offer a range of 15 colours, eight of which are new. The optional S line exterior package further hones the look, with modifications to the grille, air inlets, sills and front and rear diffusers. The S line package will also trim the car with more gloss black and a stronger sculpting in certain areas. [/vc_column_text][vc_single_image image="5322" img_size="full"][vc_column_text]Audi calls the interior of the A7 Sportback a "futuristic lounge atmosphere", and we can see why. Horizontal lines and a sleek instrument panel provide a feeling of spaciousness that isn't present in other cars. Audi have spent a lot of time making sure to get the combination of colours, upholstery materials and inlays to underscore the sporty aesthetic of the base version of the car. Introduce the S line package and you'll be treated with a few extra touches, but the main improvement comes if you choose the optional Valcona leather seats, which are perfectly suited to this model. The optional ambient lighting package will also bring subtle highlights to the interior space. The 10.1-inch upper display (in combination with MMI navigation plus) is tilted towards the driver. The user interface on the display appears as soon as the car is opened. In keeping with the interior design, Audi have worked to make the black panel optics and graphite grey frame look as minimal as possible. Audi says, "It almost disappears into the dashboard when switched off." As with the Audi A8, a second touchscreen with 'MMI touch response' lets the driver operate the climate control system, comfort functions and text input. This 8.6-inch screen sits below the infotainment display, and it's been designed so that you can comfortably use it while resting your wrist on the wide selector lever of the automatic transmission. Naturally, the new A7 will also come with the popular 12.3-inch Audi virtual cockpit.[/vc_column_text][vc_single_image image="5325" img_size="full"][vc_column_text]The Audi A7 Sportback will also come with the new Audi AI button. This lets the driver activate remote parking pilot and remote garage pilot, both of which will be made available at some point in 2018. You will also be able to get out of the car before triggering these functions in the myAudi app on your smartphone. For safety, you will press and hold the Audi AI button for the duration of the manoeuvre, and if you let go at any point, the car will stop moving. Besides the Audi AI systems, the new A7 Sportback features a total of 39 driver assistance features. They come in three different packages; the Audi AI parking package (with a gradual introduction of features starting in 2018), the City assist package with new crossing assist, and the Tour assist package. The latter comes with efficiency assistant, which helps to reduce consumption, and adaptive driving assistant, which works alongside the adaptive cruise control with helpful steering interventions to keep the car in lane. [/vc_column_text][vc_single_image image="5323" img_size="full"][vc_column_text]The new Audi A7 Sportback will initially launch with a 3.0 V6 TFSI that kicks out 340bhp and produces a 0-62mph of just 5.3 seconds. This will be followed, later next year, by additional six- and four-cylinder engines in petrol and diesel. All engines in the Audi A7 Sportback come standard with a new mild hybrid system (MHEV) for greater comfort and efficiency. [/vc_column_text][vc_column_text]

"The boot will open in response to foot motion."

[/vc_column_text][vc_column_text]There is a new air quality package that improves interior air quality by means of pushing out subtle fragrances, an ioniser and an effective combination filter. The top range of the all-new seats come with ventilation and massage functions. The improved glass sunroof lets more light into the cabin. The heated windscreen and wipers with integrated nozzles are also available for added convenience. The boot will also open in response to foot motion for ease of loading the 535 litre space (1,390 litres with rear seats folded down). All of these fine touches show just how much detail has gone in to making the new A7 Sportback.[/vc_column_text][vc_single_image image="5324" img_size="full"][vc_column_text]It's worth noting that, at this stage, it's not entirely clear what will be an optional extra, and what will be a standard feature in the new Audi A7 Sportback. In official photographs of the interior, we can clearly see that the Audi AI button isn't fitted, which leads us to believe that this will be a - possibly pricey - optional feature. We also know that the seats will have four options, the suspension will have four options and the headlights will have three options. Where the Audi A8 stands out will be the number of standard features, but with the A7, we expect it to be a modest standard car with the ability to rack up the price in the configurator in not time at all.[/vc_column_text][vc_column_text]

Production begins in February 2018, with deliveries starting in Germany first with the rest of Europe to follow shortly after.