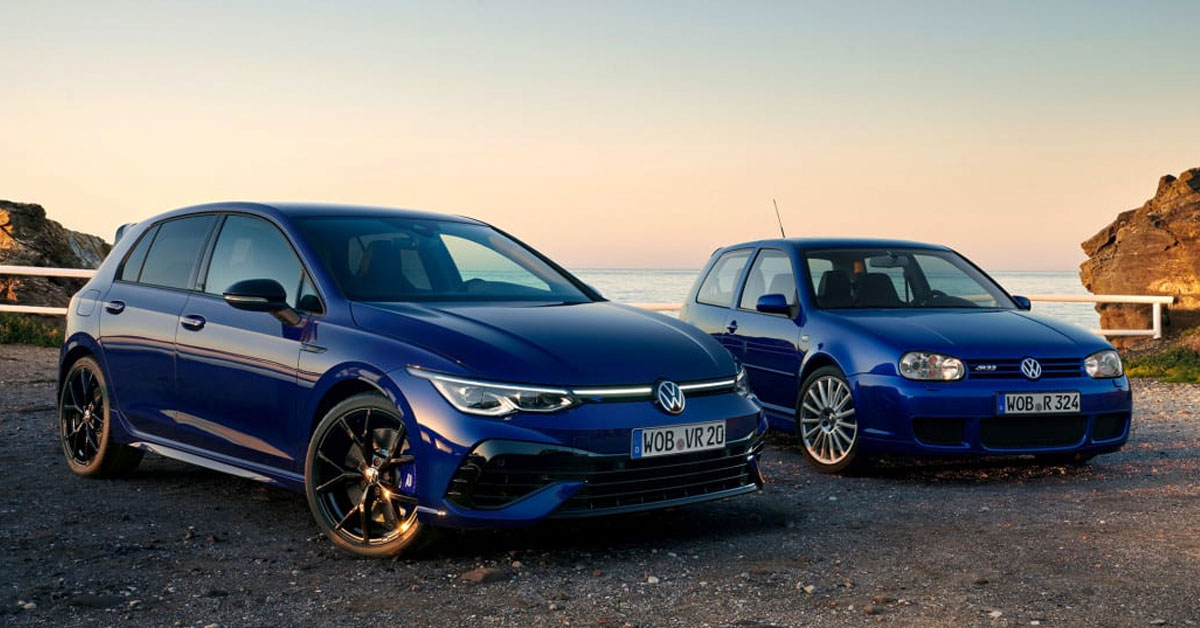 It's been 20 years since Volkswagen began production of the now world-famous Golf R performance hot hatch. Starting with the Golf R32 Mk4 back in 2002, it was the world's first production car with a DSG (dual-clutch gearbox) and featured a 3.2-litre 6 cylinder engine rated for 238bhp.

Now, with a power output of 316bhp and some of the most cutting edge driving technology ever implemented in a hatchback, the Golf R Mk8 is one of the very best hot hatches you can buy.

VW have ensured the 20th anniversary of the Golf R gets all the bells and whistles to make it a perfect send-off. Check out the changes below:

Lots of great new features which will certainly give the Golf R Mk8 a refreshed feeling. The increase in power, slicker gearbox and engine responsiveness means this Golf R will be the most potent VW have ever made. 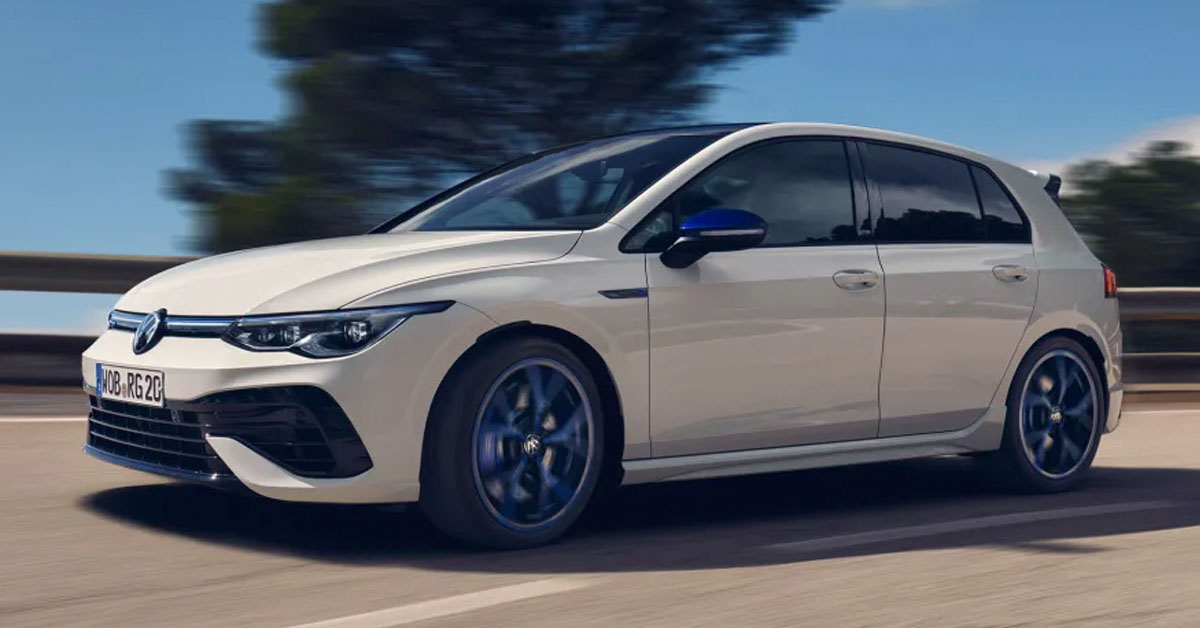 Let's go into a bit more detail about the changes below. And to save some time, we'll be referring to the 20th anniversary Golf R Mk8 as the 'R20' now.

The R20 Golf R still features the battle-hardened EA888 2.0-litre four-cylinder. But now it has been given a small boost in power from 316bhp to 328bhp, an increase of 12bhp, thanks to VW tinkering around with the engine.

VW haven't given us any torque figures yet or changes to the official 4.7 seconds 0-62mph time. But we can imagine there definitely will be some small changes with these two figures now that the car is slightly more powerful. 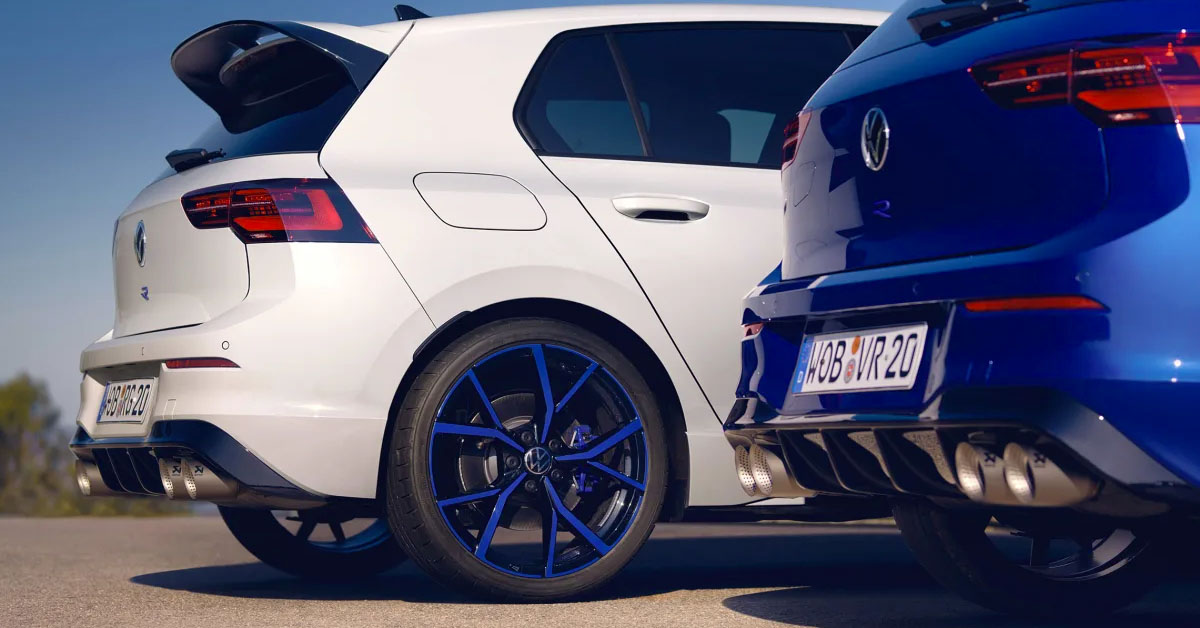 At the end of the day, this is a small boost compared to what car modders have been able to do with past Golf R models. Looking around the internet, there are already companies promising to offer Stage 1 remaps that offer up to 370bhp on the Golf R Mk8.

Changes to the turbo to improve the engine's responsiveness

A brand new feature for the R20 model, VW have been working on making the car feel a bit more responsive. One method they've come up with is an 'anti-lag' system, whereby the turbo, which keeps the throttle valve open under part throttle, holds higher boost pressures for longer.

This means that even if some time has passed between you taking a few sharp hairpin corners, the boost pressures are still high enough for you to power straight out without any lag between spinning up the turbo again.

New 'Emotional Start' function which revs the engine up to 2,500RPM on startup

More of a vanity feature than a physical one. The Emotional Start feature is quite simply a feature that revs the R20 up to 2,500 RPM on startup. Thanks to the standard Akrapovic exhaust system, this will be a pleasant sound to any car enthusiast. Or it will annoy your neighbours. 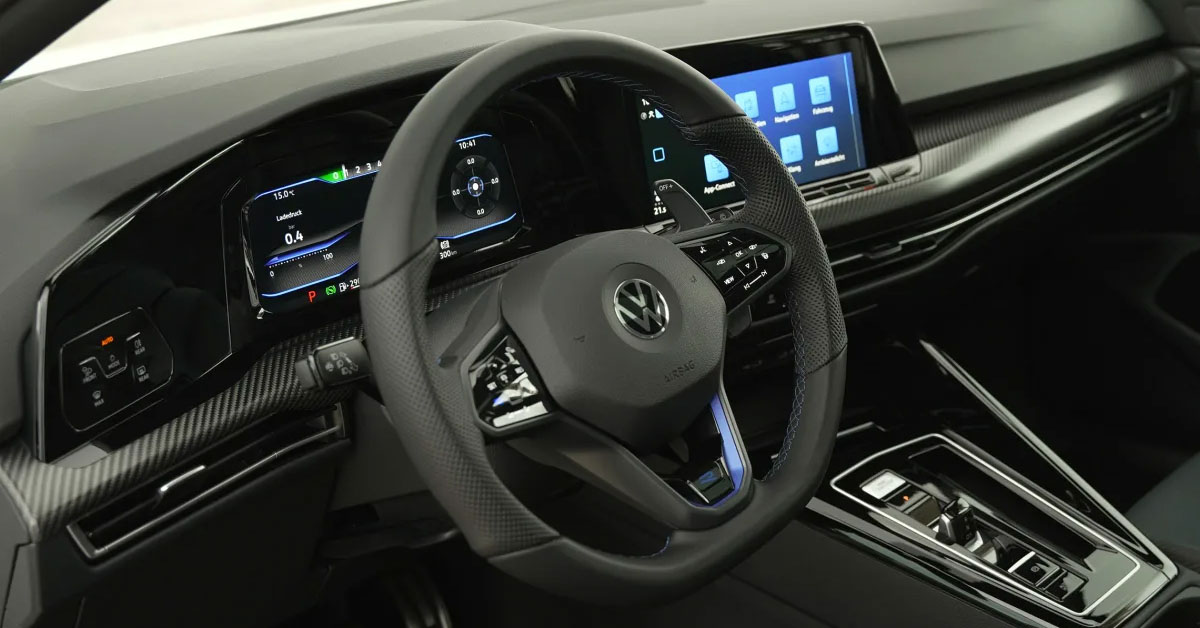 As mentioned above, the R20 will come standard with an Akrapovic exhaust system and a sportier/taller rear spoiler. It actually comes standard with features from the R-Performance pack, which includes the rear spoiler and 19-inch Estoril alloys.

The award-winning seven-speed automatic DSG has been given some updated software which VW promises will deliver faster and smoother shifts when driven hard.

They haven't mentioned any changes regarding the torque-vectoring differential system or 4Motion all-wheel-drive system yet. It's possible these have had no changes at all, as VW may have thought they were perfectly fine with the R20's changes anyway. 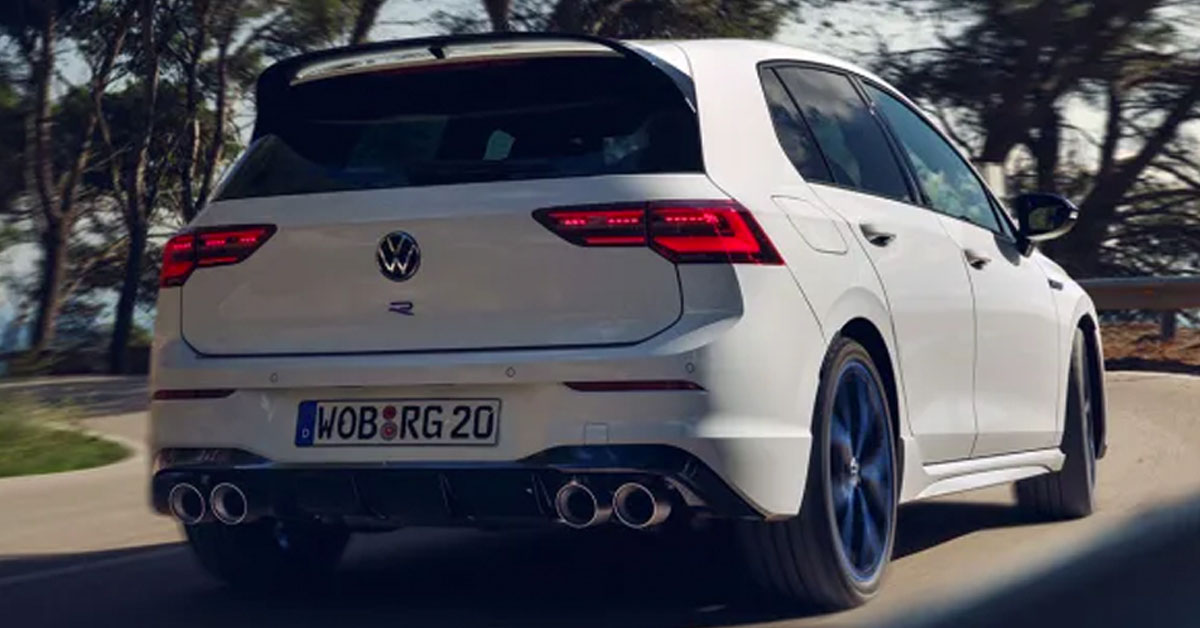 Another vanity feature. The R20 gets unique Lapiz Blue painted 19-inch Estoril alloys. They certainly make the car look unique and stand out from the crowd. Personally, I think they look a bit tacky but that's just me.

Of course, no special edition car is right without several areas throughout dotted with anniversary badging and the R20 is no different. It features bespoke 'R20' badging dotted around the interior, as well as on the car's rear bumper and door pillar. 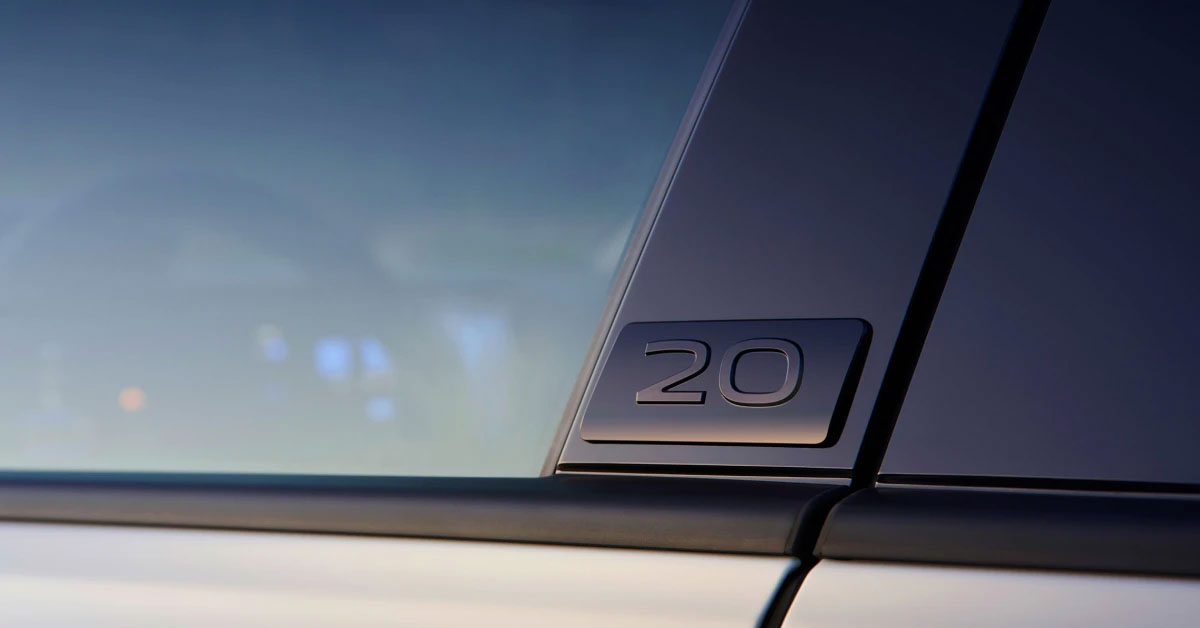 VW have shelled out for some real (that's right, REAL) carbon fibre adorning the entire length of the dashboard trim. It definitely improves the look of the cockpit (from the pictures VW have given us). Sadly, the central panel remains a bit basic and there are no bucket seats, unlike the GTI Clubsport S model. No panoramic sunroof as standard either. Cmon VW!

VW hasn't given any official word about the pricing yet. But it's fairly easy to assume the costs will be around £50,000+ due to the cost of the current Golf R Mk8. It's already easy enough to top the £50k mark by adding up a similar specced Golf R on the VW configurator. 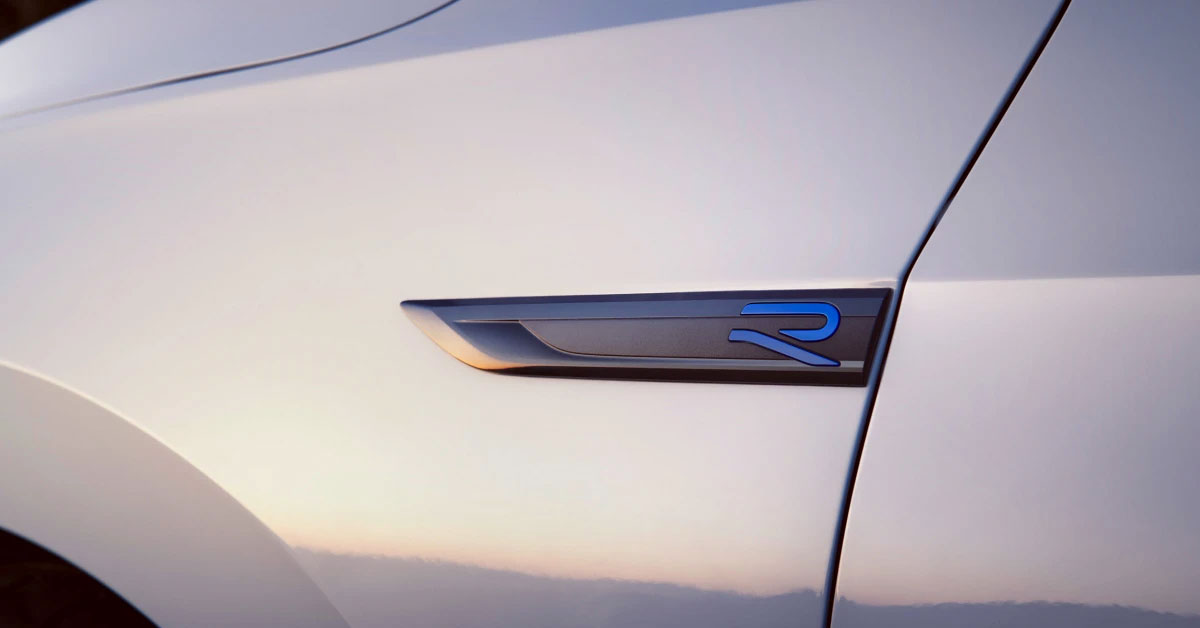 Volkswagen have said some R20 editions are going to turn up at dealerships from the middle of 2022. Given that we're already near June, we expect that you'll be able to order these fairly soon.

Production numbers aren't expected to be limited, although Volkswagen have already said the "20 Years’ special is already a collector's item", so it remains to be seen how many will be built.

But production timescale will definitely be limited, with Volkswagen saying they are only going to build the car up to the middle of 2023. So essentially, you have a full year to get the R20 ordered, if you really want it.