The Grand Tour has finally landed, and with Amazon's massive budget being used up for this show, the production value is next to none. 100% worth watching.

The Grand Tour has finally landed, and we made sure to catch up on the first episode over the weekend. It is so similar to Top Gear, it might as well be Top Gear. There is definitely a feeling of Amazon saying, 'Spend as much as you need to make this show brilliant'. For starters, there's a roaming studio that the show will pick up and take with it around the world - this week, we had the backdrop of a desert in Los Angeles. Then there's the ridiculously huge car budget (naturally).

Let's start off with the cars the make up the centrepiece of this episode, a McLaren P1 (£1,000,000), a Porsche 918 (£1,000,000) and a Ferrari LaFerrari (£1,000,000). If you wanted to show that you meant business with a brand new TV show about cars with the original cast of Top Gear... this is how you do it. Well done, Amazon. Then there's the celebrity cameos! Well, sort've. Jeremy Renner (Avengers, Bourne Legacy), Armie Hammer (The Social Network) and Carol Vordeman (...Countdown) all make an appearance. And then they all get killed off (no, we're not kidding), but we hope to see big stars - alive stars - on the show in the coming episodes.

The introduction of the cars is stunning. Real show pieces that give you slow motion shots of all the best parts of a car. The production team have spent a lot of time making sure that you're able to enjoy every single aspect of a car inside and out. Not to mention a computer generated look inside the previously mentioned supercars to show how their engines work.

A few minutes in to the episode, and we've got all our jabs at the BBC out of the way. This is probably salt in the wound for BBC, as this show is everything Top Gear was, and more, showing that they were silly to let the three go. Amid a struggle to keep Top Gear relevant with new hosts and cast leaving after one season (to public approval), The Grand Tour stands strong as a beacon of what the show could've been with a budget like Amazon's. The new test track, the 'Ebola Drome' (because it looks like ebola, of course) has some wittily named sections like Old Lady's House, the Unexploded Bomb, the Not-Straight and more. Jokes aside, this track will seriously put cars under pressure as the team - or the Stig replacement, The American - put them through their paces. 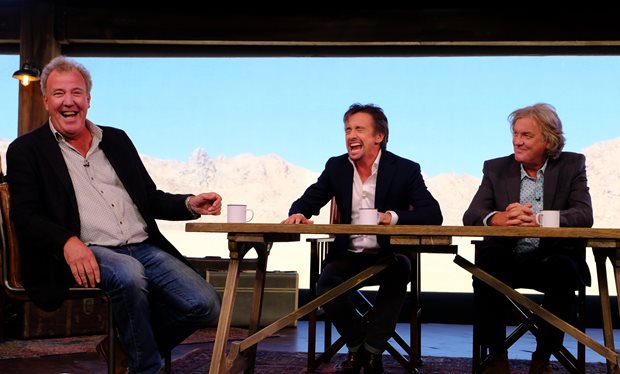 All-in-all, this was over 60 minutes of pure Top Gear nostalgia, and I can't wait for the next episode. If you still haven't got Amazon Prime Video, you can pick up an Amazon Prime membership for £79 (or £7.99 per month), and you'll get free one-day Amazon Prime delivery, Amazon Music, Amazon Prime Now (if you have it in your city) and more as well as Amazon Prime Video! If you've never used the trial before, you'll even get your first month for free, so you'll get the first few episodes for nothing!