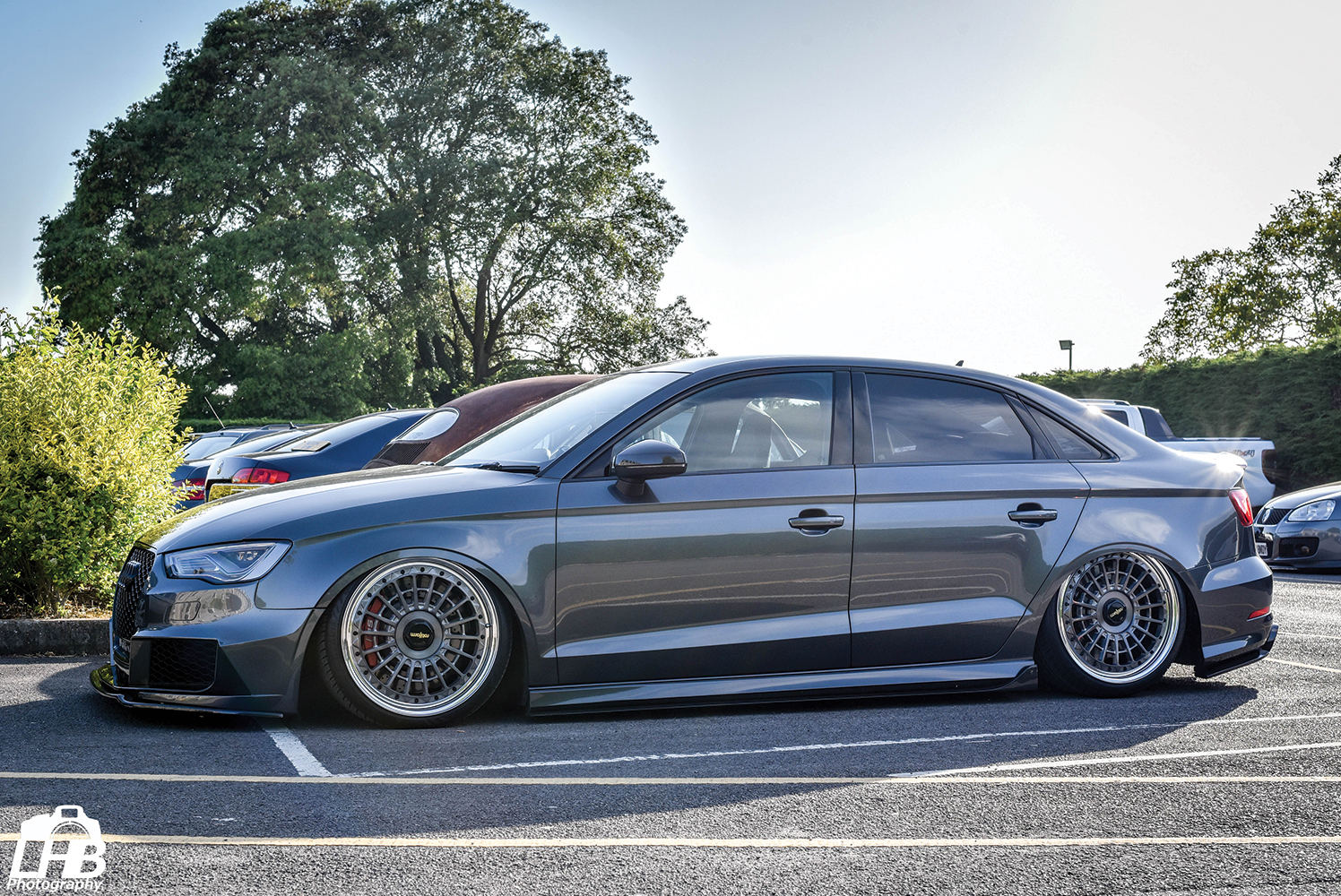 One modded German car stands out in most tuning circles. The owner, S30BMX, took some time to talk to us about his tricked out Audi S3 Saloon.

There is a rising trend in German car modification, and if you're looking for inspiration, one stands out in most Audi tuning circles. The owner, Steve, took some time to talk to us about his heavily modded Audi S3 Saloon.

[/vc_column_text][vc_column_text]On the outskirts of London, you might do a double-take as a kitted out Audi S3 Saloon darts past you. Capable of keeping up with Lamborghinis, overtaking R8s and almost touching the floor with its bodywork. We caught up with the owner to find out more about this street-legal beast.[/vc_column_text][vc_single_image image="4909" img_size="full" alignment="center"][vc_column_text]

Hi Steve, thanks for taking the time to talk to us about your S3 Saloon monster! When was it that you first got interested in cars?

Your Mk6 Golf is well known, but more recently you switched to an Audi S3 Saloon. What prompted the change?

[/vc_column_text][vc_column_text]My Mk6 was an awesome car. I totally rebuilt it inside and out, I'm sure anyone who saw it knows that! It was when I was at Revo Technik HQ having the K04 turbo fitted to my Mk6, and I saw an S3 Saloon there and I fell in love. About two months later, I toyed with the idea of changing. I went to Audi to have a look and expected to find that I couldn't afford one. After sitting down with them, and chatting with them a few times, I realised I could get one and ordered it.[/vc_column_text][vc_single_image image="4906" img_size="full" alignment="center"][vc_column_text]

What would you say is the most important change you've made to your car?

[/vc_column_text][vc_column_text]My personal favourite changes I've made to this car are the whole interior with the red re-trim, the RS4 seats and the carbon fibre! It makes being in the car an amazing place to be. Also, you can't ignore the power! Without a doubt. It makes the car a hell of a lot of fun. There's no better feeling when you get RS4s, R8s and M4s alongside you, trying to show off, and you absolutely destroy them. They have no idea what's happened. I actually had a Lamborghini LP180 in front of me the other day, driven by a younger guy. He put his foot down, and you could actually see him double-take in the rear view mirror when I was still stuck to his rear bumper. He loved it![/vc_column_text][vc_single_image image="4910" img_size="full" alignment="center"][vc_column_text]

"It's time for me to start stacking the pennies and saving up to maybe get something better in the future."

Do you have anything else planned to keep working on it?

If money was no object, what car would you upgrade to, and what would you add to make it perfect?

[/vc_column_text][vc_column_text]You know what, it sounds strange, but it wouldn't be anything too crazy at all. I am a massive sucker for the new Audi R8s. They have really out-done themselves with that model, even from standard it looks incredible. That would be my choice. I would obviously bag it, band a set of Rotiforms on it, and more than likely get the Vorsteiner carbon kit fitted to it. Take a look if you haven't seen one, the aggression is insane![/vc_column_text][vc_single_image image="4907" img_size="full" alignment="center"][vc_column_text]

What made you choose an Audi model over other brands?

Is there anything you'd like to say to our readers?

Thanks for your time Steve! Always a pleasure looking at your car, and great to learn about it.