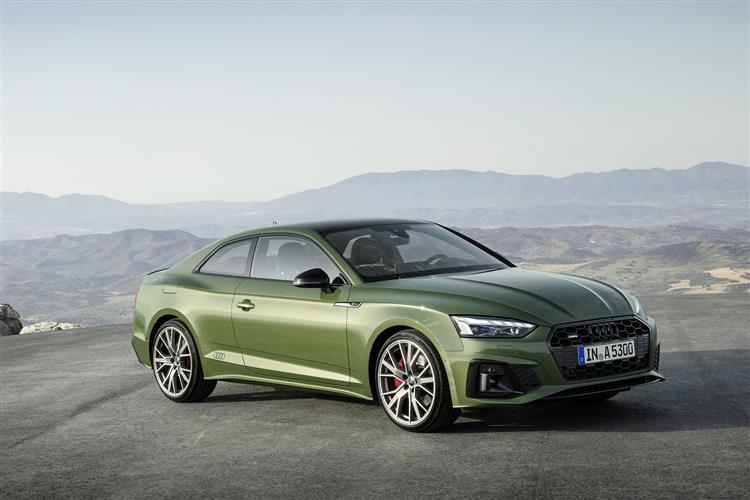 Audi's second generation A5 Coupe is in this improved form even more intelligent and sophisticated. Jonathan Crouch checks it out.

Efficiency. It's a very Germanic trait. And of all the Teutonic automotive brands, Audi epitomises it best. Not only in its compact hatches and business-bound saloons which have to be affordable to run, but also in sportier, more impulse-purchase models. The second generation A5 Coupe we're looking at here claims to be a shockingly efficient way to have an awful lot of driving enjoyment. Especially in this facelifted form, which introduces mild hybrid technology to the range. As usual, this car is based on the platform of Audi's A4 saloon, a rather sophisticated platform as it happens, the MLB Evo underpinnings able to trim quite a lot off the overall kerb weight. The suspension set-up is firmer than you get in an A4, which aims to make this A5 feel sportier and better able to face down its arch-rivals, coupe versions of BMW's 4 Series and the Mercedes C-Class.

You'd think, when it came to driving dynamics, that this A5 would be starting out with a disadvantage over 4 Series Coupe rival. Its front-driven layout will, after all, never reward an enthusiast in quite the same way as a rear-driven BMW. But in originally developing this car, Audi was convinced that it could be made to feel almost as good. To prove the point, three different suspension systems are being offered, two of them passive and one featuring adaptive damping. Whatever your choice, you'll find the set-up firmer than it would be in an equivalent A4 saloon. Under the bonnet, a range of TFSI petrol and TDI diesel engines are being offered, with outputs ranging from 163PS to 347PS. Four A5 engine variants are equipped with a mild hybrid system. Here, a belt alternator starter, which is connected to the crankshaft, recovers energy during deceleration and stores this in a compact lithium-ion battery. With the four-cylinder engines, the MHEV system is integrated into the 12-volt electrical system and a 7-speed S tronic auto gearbox is mandatory. There are of course the usual quattro 4WD options. The S5 TDI six cylinder models, now diesel-engined and offering 347PS, use a 48-volt MHEV electrical system, an 8-speed tiptronic auto and of course have quattro 4WD.

Think this improved version of the second generation A5 coupe doesn't look much different to its predecessor? Look again. The exterior has actually been significantly revised, with the front end in particular, delivering considerably more visual impact. The Singleframe honeycomb grille is wider and flatter, and above it ventilation slits reference the classic Audi Sport quattro from 1984. A bold blade forms the lower edge of the bumper, which features larger air inlets. A new sill provides for a slimmer appearance when viewed from the side, while at the rear a diffuser insert with trapezoidal tailpipes makes the car appear wider. Horizontal lines also dominate the interior of these improved A5 models. The large MMI touch display, the control centre of the car's redesigned operating system, is the focal point of the instrument panel and angled slightly toward the driver. It offers a user experience similar to a contemporary smartphone via a 10.1-inch touch display with acoustic feedback which replaces the rotary pushbutton used in previous models. Like all the latest Audis, this one gets the brand's 'Virtual cockpit' instrument binnacle, a 12.3-inch TFT display that replaces the conventional dials. Out back, the boot's well sized, offering a volume of 465-litres, more than you get in BMW and Mercedes rivals. The rear seat has a 40:20:40 split and can be easily folded forward using levers in the luggage compartment. Audi also offers an optional gesture control system for opening the luggage compartment lid via a foot motion.

In the mainstream A5 Coupe range, there are four trim levels - 'Sport', 'S line', 'Black Edition' and top 'Vorsprung'. Prices start at around £34,000 and rise up to just under £55,000. You'll need a £49,000 budget if you want the 354PS S5 flagship model and around £64,000 for the top RS5. As usual, there's a premium of around £3,500 to pay if you want to switch from any given petrol variant to its diesel alternative. If you want S tronic automatic transmission on the base petrol and diesel variants most will choose, there'll be a premium of around £1,500 more to find for it. Go for the diesel auto and you'll be offered the further option of finding around £1,700 more to get quattro 4WD. Whichever variant you choose, you should find your car to be decently equipped. Among the features included are xenon headlights with LED daytime running lights and LED rear lights, LED interior lights, the Audi 'MMI radio plus' with a 7-inch MMI colour display, Bluetooth, a USB charging function, a three-spoke multifunction steering wheel, the Audi drive select dynamic handling system and Audi 'pre sense city' autonomous braking. Audi is particularly proud of its media connectivity, specifically the 'connect' system that can link to the Internet via the ultrafast LTE network.With the standard Audi smartphone interface, Apple Car Play and Android Auto bring the familiar smartphone environment to the car, if desired. The optional Audi phone box with wireless charging in the centre armrest uses near-field coupling to link smartphones wirelessly to the vehicle's antenna.

This A5 Coupe's new mild-hybrid diesel engine uses a 12-volt or 48-volt belt-driven alternator starter, a 0.5kWh lithium-ion battery pack and an energy recuperation system. Audi claims exemplary fuel economy, thanks to a revised engine control unit which shuts off the combustion engine when coasting at speeds between 34mph and 99mph. The engine management system decides in every situation whether coasting, freewheeling or recuperation (the recovery of kinetic energy), is most efficient. It does this using information from the navigation system and the onboard sensors. The energy recovered by the water-cooled belt alternator starter during coasting and braking flows into the 48-volt storage unit or directly to the electrical consumers. When the driver presses the accelerator pedal again after a coasting phase or a stop, the water-cooled belt alternator starter restarts the combustion engine. The system does this as required by the driver's wishes and the situation, from very smoothly to very quickly. Start-stop operation begins at 13mph. When stopped, the engine restarts as soon as the car in front starts to move, even if the brake is depressed. Of course, the driver will have to do his or her part. Helping here is the clever 'Predictive efficiency assist' system that could potentially improve your fuel economy by as much as 10%. It works with the Navigation package and analyses any given route, once set, to decide how the journey could be undertaken more efficiently, taking into account things like the speed limits, traffic signs, bends and roundabouts you'll be encountering along the way. The set-up then offers driving tips that'll help you achieve that: perhaps, for example, a junction is out of your sight around the next bend and you could take your foot off the accelerator a little earlier. Get onto the motorway and with the optional Adaptive Cruise Control system activated, 'Predictive efficiency assist' will automatically make all the frugal driving adjustments for you. If it knows you're going to be travelling for a few junctions, it'll even disengage the engine at cruising speeds for greater efficiency, then re-engage it immediately and almost seamlessly when you either accelerate or brake.

The Audi A5 may not be the sportiest or the most prestigiously-badged compact executive sports coupe you can buy but the sales figures suggest it's the one that most customers in this segment would rather have. The proof in the product is that Vorsprung Durch Technic is more than just a marketing slogan, a passion for perfection that means the company's never-ending quest for better, more efficient products never stops. And this is certainly one of those. In terms of driving satisfaction, it's as close to the class-leading rear wheel drive BMW 4 Series Coupe as any front-driven rival is ever likely to get. And in every other respect - quality, practicality, value and running costs - this A5 is unequalled in its market. Some may find in Audi's ruthless pursuit of excellence a product that can be rather soul-less. But many more will see this car as being everything that a desirable sports coupe should be. Very smart. Very cool. And very Audi.